In Podolsk Vityaz kept its play-off hopes alive with a 2-1 win over Admiral, but the visitor is starting to look like a long shot for a post-season berth.

With much at stake for both teams it took a long time to break the deadlock, with home goalie Harri Sateri pulling off a great save to thwart a two-man Admiral break early in the second.

Vityaz eventually got ahead in the 39th minute thanks to an Alexander Kucheryavenko goal and doubled that advantage through Nikita Vyglazov midway through the third. Konstantin Makarov’s power play goal pulled one back for Admiral but Vityaz took the points to move to within two points of eighth-placed Torpedo, having played two games more. Admiral stays ninth in the East and now has seven points to make up on Avtomobilist.

Avtomobilist strengthened its position in the East thanks to a shoot-out win at Atlant. Aaron Polushaj got the decisive goal after a 2-2 tie.

Atlant, which badly needs points to keep its own play-off hopes alive, took the lead in the sixth minute through Vyacheslav Leshchenko only for Sami Lepisto to level it up just before the first intermission. Alexander Nesterov put Avto 2-1 up early in the second but Anton Babchuk forced the extras with a 48th-minute marker. However, a single point for the home team leaves it in 12th place, three points adrift of Torpedo. 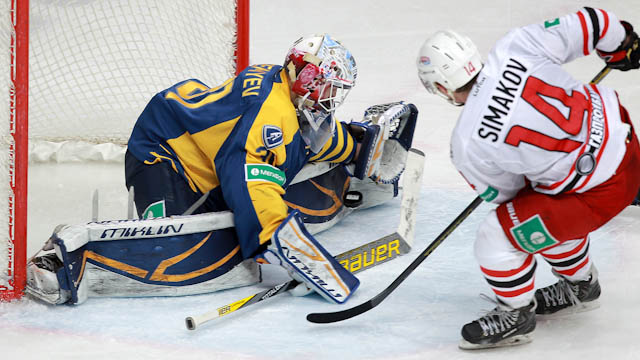 Dinamo hopes cut down by Traktor
Dinamo Riga missed the chance to return to the top eight after suffering a 4-2 home defeat against Traktor.

Victory would have put the Latvians one point ahead of Torpedo in the Western Conference, but instead Dinamo remains in a clutch of teams two points adrift of the all-important qualifying line.

Things started out well enough for the home team after Gints Meija put it up in the 13th minute but it all went wrong midway through the game. Traktor scored three in six minutes through Francis Pare, Konstanin Panov and Maxim Kondratiev to build a decisive advantage.

Dinamo got one back thanks to Kristaps Sotnieks but could not tie the game in the final session, remaining outside the play-off places. Martin Ruzicka scored an empty-netter to confirm Traktor’s win, which moves it to nine points clear of the chasing pack in the East.

Around the league
The only game that had little bearing on the play-off race was Dinamo Minsk’s home meeting with Ugra. The Belarusians won it 3-1 thanks to two goals and an assist from Charles Linglet. Matt Ellison was Dinamo’s other scorer, Nikita Gusev found the net for Ugra.