Denis Kokarev handed Dynamo victory with a late goal at the VTB Arena – but for Metallurg’s Evgeny Biryukov it was a moment to forget.

There seemed to be little danger as the defenseman brought the puck out from behind his own net, but he lost control at a crucial moment, allowed Kokarev to nip in, steal possession and score the winning goal.

That stretched Dynamo’s run to five games without defeat, even though for long periods Magnitka seemed capable of leaving Moscow with the points. Dmitry Vishnevsky fired the Blue-and-Whites ahead midway through the first period, but the second stanza belonged almost entirely to the visitor. Metallurg fired in 17 shots on Alexander Lazushin, while allowing just two on its own net, but after Sergei Mozyakin tied the scores in the 25th minute neither he nor his team-mates could convert another of those many chances.

Ultimately that wastefulness was punished: the third period was a far more even affair, and Biryukov’s blunder proved decisive.

Sateri back on form

Finnish goalie Harri Sateri had suffered a difficult couple of games for Vityaz, conceding 9 times in 86 minutes of hockey going into Wednesday’s clash with Salavat Yulaev.

But he was back to his best as he made 38 saves to deny the visitor and help his team to a confidence-boosting win.

Second-period goals from Igor Musatov and Dmitry Shitikov put Vityaz in control before Mario Kempe completed the scoring with an empty net goal. 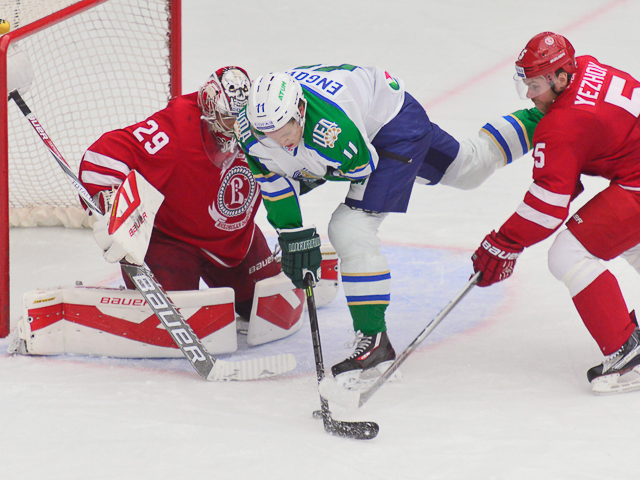 Geoffrey Kinrade’s overtime goal gave Medvescak victory over Neftekhimik and stretched the Croatians’ winning run to five games. All the other scoring came in the first period, with the teams trading four goals. Mike Glumac gave Medvescak a perfect start, but Neftekhimik hit back with two goals in 73 seconds from Igor Polyganov and Pavel Zdunov. Edwin Hedberg tied it up in the 14th minute.

Traktor won 3-1 at Slovan thanks to goals from Ilya Davydov, Semyon Kokuyov and Alexander Rybakov. Michal Miklik got Slovan’s reply.