Avtomobilist secured its play-off spot with a 3-0 victory at home to Urga.

The Motormen came into Tuesday’s game knowing that any kind of win would secure a top eight finish for the season and made no mistake in dispatching the visitor.

As early as the third minute Avto went in front: Dmitry Megalinsky’s pass from behind the goal picked out Artyom Gareyev unmarked on the slot to open the scoring.

Alexei Mikhnov doubled the lead right before the first intermission, deflecting home Alexei Vasilievsky’s shot from the blue line. Krill Knyazev added the third in the middle session while Igor Ustinsky made 23 saves for his shut-out. 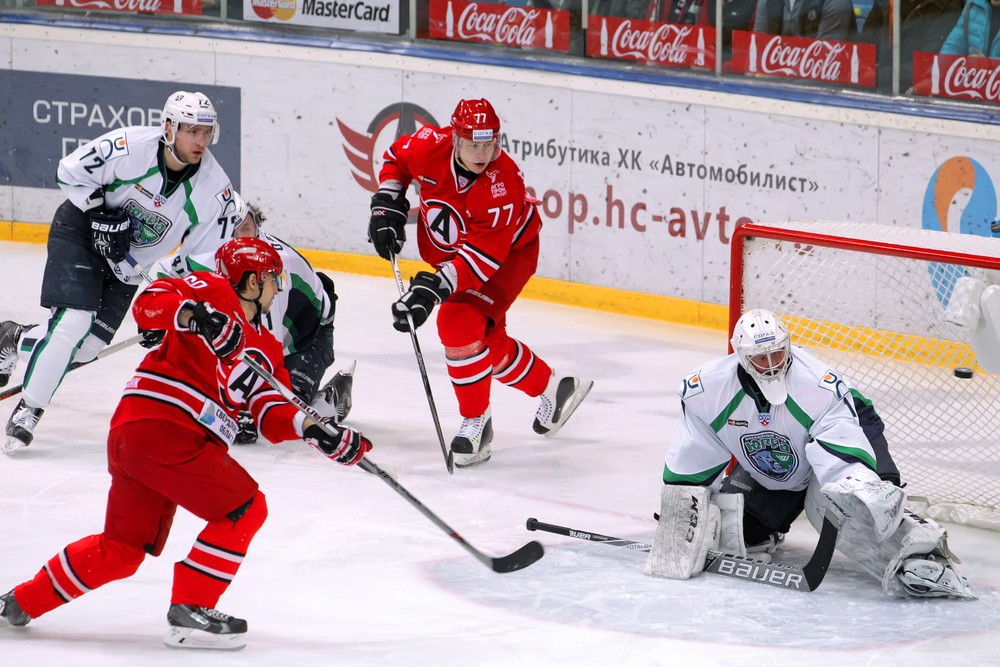 Neftekhimik is on the brink of securing a post-season pass after opening up a three-point gap on Barys ahead of the final game of the season.

It means that a point at home to Salavat Yulaev on Thursday will guarantee Neftekhimik’s qualification regardless of the result of the Avangard vs. Barys game.

Neftekhimik made a bright start against Lada with Igor Volkov and Dan Sexton opening up a 2-0 lead in the first eight minutes, but Lada hit back to tie the scores by the first intermission.

Sexton struck again to make it 3-2 and Yegor Milovzorov reinstated the two-goal cushion. Lada did get one goal back but Bogdan Yakimov added two more for Neftekhimik in the closing stages to wrap up the win. 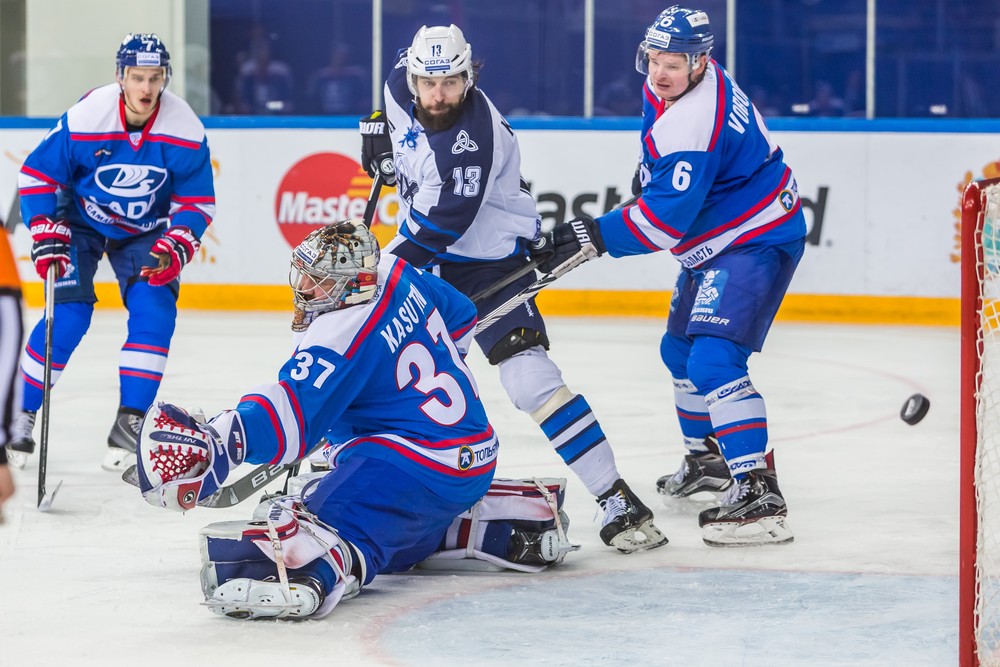 Barys, which began the day level on points with Neftekhimik, saw everything go wrong in Kazan. Ak Bars romped into a 4-0 lead thanks to two goals from Fyodor Malykhin and further markers from Justin Azevedo and Artyom Lukoyanov.

Dustin Boyd and Roman Starchenko reduced the lead but Vasily Tokranov made it 5-2, ending any hope of a Barys revival.

Despite losing in a shoot-out against its closest rival in the East, Avangard confirmed it will finish the season in top spot.

Only a regulation time victory would enable Sibir to remain in contention until the end of the campaign but once the game went to overtime the gap was too great and Andrei Skabelka’s team can finish no higher than third. Meanwhile, Magnitka’s defeat against Traktor ended its hopes of pipping Avangard while Salavat Yulaev’s stumble at home to Metallurg Novokuznetsk ensures the men in green will finish fourth.

All the scoring in Omsk came after two goalless periods. Ilya Zubov scored twice early in the third to give Avangard a 2-0 lead before Sibir hit back with goals from Maxim Ignatovich and Calle Ridderwall to take the game to overtime and ultimately a shoot-out. David Ullstrom decided the outcome of the game in Sibir’s favor.

Metallurg could have closed the gap on Avangard with victory in the South Ural derby against Traktor. But Alexander Rybakov’s goal on 5:53 proved to be the only one in the game – Vasily Demchenko made 31 saves to give Traktor the win.

The other team in the top four, Salavat Yulaev, let slip a 3-1 lead and lost out to Metallurg Novokuznetsk. Two goals from Nikolai Prokhorkin put the home team in control but Pavel Makarenko, Kirill Semyonov and Fyodor Polishchuk saw Kuznya came a comeback win.

With the key issues in the Western Conference already resolved, the main point of interest today came in Helsinki where Jokerit confirmed second place with a 3-1 win over SKA. Philip Larsen and Arturs Kulda put Jokerit 2-0 up in the first period. Jarno Koskiranta halved the deficit in the last minute of the middle session but Juhamatti Aaltonen made it 3-1 early in the third.

Regular season champion CSKA went down to a 4-2 defeat at home to Vityaz with Alexander Radulov getting into a fight midway through the third period after clashing with Georgy Berdyukov. Vityaz got its goals through Nikita Vyglazov, Roman Horak, Anton Korolyov and Dmitry Shitikov. Nikita Zaitsev and Artyom Blazhievsky replied for CSKA. 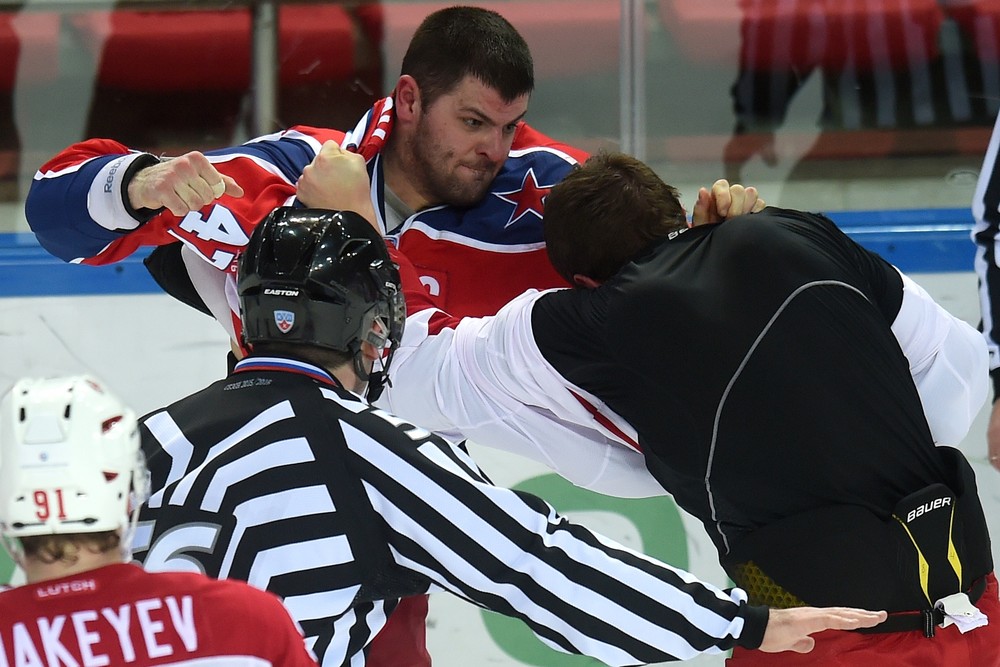 Andre Petersson scored three for HC Sochi in a 5-2 home win over Slovan. Ladislav Nagy gave the visitor a first-period lead but Sochi roared back. Denis Kazionov and Evgeny Skachkov also found  the net for Sochi.

Two late goals gave Lokomotiv a 4-2 win over Medvescak. Denis Mosalyov and an empty-netter from Yegor Averin settled the game in the last two minutes.

Torpedo lost 5-4 at home to Severstal on an overtime goal from Ondrej Nemec. Torpedo scored two goals in the last five minutes as Igor Rudenkov and Nikolai Zherdev tied the scores but Nemec got his second of the night to win it for the visitor.

Miks Indrasis got the only goal of the game as Dinamo Riga beat Dynamo Moscow in Latvia. Indrasis struck in the 24th minute; Yakub Sedlacek made 25 saves.

Spartak won 5-2 at Dinamo Minsk. Casey Wellman snapped a 2-2 tie late in the first period and further goals in the second from Gleb Klimenko and Dmitry Korobov secured the victory for the visitor.

Amur won 3-1 at home to Admiral in the Far East derby. Nikolai Skladnichenko, Niklas Bergfors and Rinat Ibragimov opened up a 3-0 lead for the host before Kirill Voronin got a third-period consolation for the visitor.