Bears and Devils in the land of the Dragon

There’s more to Welsh sport than Gareth Bale – and Medvescak Zagreb have been winning friends and promoting hockey at a pre-season training camp in Cardiff.

Medvescak made a little piece of history at the weekend, becoming the first KHL team to play in Britain.

Two exhibition games at Cardiff Devils wrapped up a week-long training camp that saw the team making plenty of friends in the Welsh capital. Not only did Medvescak attract decent crowds for the games at the new Ice Arena Wales, it also found several hundred fans happy to come along to open practice sessions during the week as they sought a glimpse of high-level hockey.

“I’ve nothing but good things to say about Cardiff,” said Medvescak captain Mike Glumac. “It’s been a great time for us and we’ve been impressed with the support that we’ve had with people even coming along to watch our training sessions.

“We’ve been having two sessions a day, so I just hope we weren’t too tired in the evening ones when the fans could come along!” 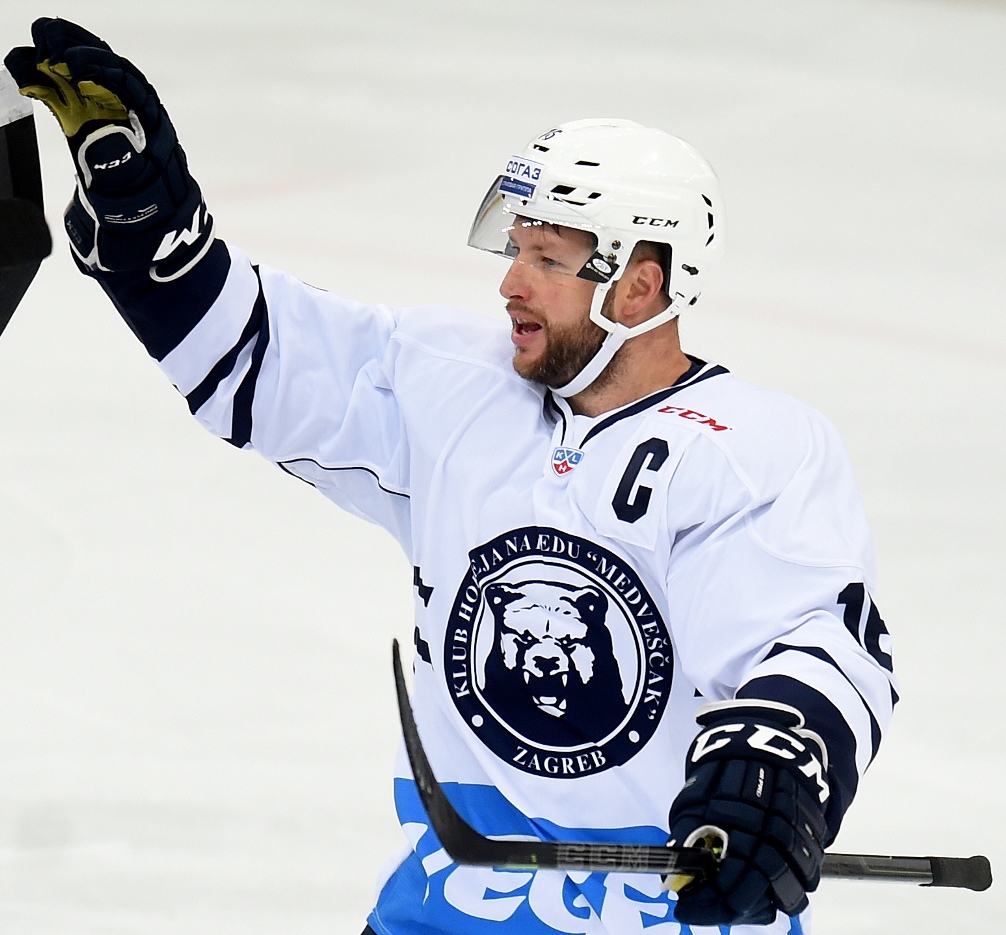 After spending most of last year’s pre-season at home in Zagreb, Medvescak was keen to get away for part of this summer. As well as the trip to Cardiff there was also a week in the Czech Republic. And with plenty of new faces on the roster, it’s been a chance for head coach Gordie Dwyer to really introduce a strong team identity for the coming campaign.

“We’ve focused a lot on how we have to play collectively in every game if we’re to be successful,” he said. “We’ve implemented our team systems and our mindset of how we want to play and now it’s a question of going out and getting in some good games here before the regular season starts. It’s just around the corner but we’ve had a good camp so far and we’re looking forward to starting the season strongly.

Leaving with two victories – a 6-0 thrashing on Saturday and a 4-1 success on Sunday – added to the upbeat mood around the Medvescak camp, with head coach Gordie Dwyer pleased with the way his new-look roster was coming together.

“There’s always a period where the guys feeling their way through but I think we’ve identified guys who play to our strengths,” Dwyer added. “These are good characters. We’re a team that wants to play fast, that wants to be aggressive, so we identified the returning players who could fit into that early. Then the newcomers are jumping in with us and they’re all players we are familiar with and we felt could help contribute to our club.”

The pace of the team certainly caught the eye among the fans in Cardiff – “it’s like watching a game on fast forward,” one impressed local observed on Saturday – and many of the new and returning players displayed their pedigree in Wales. Francis Pare is familiar to KHL fans from his time in Magnitogorsk – where he was part of the 2014 Championship roster – Chelyabinsk and Bratislava. He returns to the league after a stint in Finland. Other familiar faces include goalie Danny Taylor and forward Colby Genoway, both returning to Zagreb after short spells at Sparta Prague and Fribourg-Goteron respectively. Meanwhile Yann Sauve, fresh from Manchester Monarchs in the AHL, took the man-of-the-match honors for Medvescak with 1+2 on Saturday.

Off the ice the week was also a success for Medvescak, with the team making a great impression on its host. Devoting some time to working with the Devils’ juniors and allowing Cardiff’s coaches to gain a first-hand insight into how players at KHL level prepare helped to cement the relationship between the clubs. The first contact came at the end of last season when Britain’s national team travelled to Zagreb for its World Championship Division 1B tournament and former Cardiff goalie Stevie Lyle put Medvescak’s sporting director Aaron Fox in touch with the Welsh organization as the Devils looked to start their 30th anniversary season with a bang.

From there, the idea quickly captured the imagination on both sides and Cardiff GM Todd Kelman was delighted with how much Medvescak were able to offer during the stay in Wales.

“Our head coach, Andrew Lord, has been on the ice with them every night,” Kelman said. “Their coaching staff, Gordie, Connor and Dylan have all been fantastic. On the last couple of nights they even stayed late to take some of the junior sessions with our kids. The Zagreb players stayed late to work with the kids too, which was great. They didn’t have to do that and it’s been a cool experience for our younger Devils.”

For the senior team, coming face to face with such a strong opponent was a valuable learning curve before the British season gets going next month – and the legacy is set to endure well beyond the weekend games.

“We’ve had a chance to learn from a team in one of the best leagues in the world,” Kelman added. “We’ve been filming all their sessions so we can take that away from this week of training camp and maybe use some of their stuff during our season. It’s been exciting for our fans and it’s been exciting for our club – and Andrew and myself have been sponging ideas off these guys all week!”

For Cardiff, pre-season continues with more continental opposition in the form of Slovakia’s Banska Bystrica and the Dutch-based DEL 2 outfit from Tilburg. For Medvescak, the KHL campaign is fast approaching and – as always – the aim is to secure at least a playoff spot.

Glumac is expecting a tough season, especially facing crop of high profile Russian stars, but believes that the team spirit in Zagreb can keep Medvescak competitive throughout.

“Obviously we’re not going to be a skilled as the Russian teams, those guys have world class skill levels,” he admitted. “But for us it’s more about playing good systems and getting it right game in and game out. With those Russian players, they’re so skilled that any time you break down it can end up in your net.”

Dwyer, meanwhile, emphasizes team identity and careful preparation – precisely what the Cardiff trip was designed to foster. “We know that we’re going in against clubs with higher payrolls but we feel our preparation, that being ready game in, game out, gives us the best chance to win,” the head coach added. “That preparation gives us a bit of an edge and our players buy into the team concept, buy into what we have to do.”