SKA’s team spirit, and a Sino-Finnish partnership – the week’s highlights

The week was dominated by the build-up to the opening game of the Gagarin Cup final on Saturday. SKA edged that one, leaving defending champion Metallurg Magnitogorsk in familiar territory. Magnitka lost its opening game in its previous appearances in the showpiece series, but recovered both times to lift the cup in game seven.

Away from the ice, Finland and China just got closer. KHL rivals Jokerit Helsinki and Kunlun Red Star signed an agreement on working together to boost the development of Chinese hockey as Beijing looks for a winter sports boom ahead of its 2022 Winter Olympics.

The Gagarin Cup Final series opened with a thriller in Magnitogorsk, where SKA prevailed by the odd goal in nine. Evgeny Dadonov scored two, including the game-winner, Patrik Hersley got a goal and two assists, and young goalie Igor Shestyorkin surprisingly got the starting role ahead of Mikko Koskinen. The 21-year-old Rangers prospect, who earlier this season set a club record shut-out sequence of 272 minutes, eight seconds, only broke into the playoff line-up after an injury to his Finnish colleague, but retained his place after Koskinen returned to full fitness in the run-up to the final series. Playing in a Gagarin Cup Final for the first time, he helped his team secure victory over defending champion Metallurg Magnitogorsk.

The opening game also saw two players ejected for checking to the head. Metallurg’s Oskar Osala was the first to go, followed by Ilya Kovalchuk of SKA. However, home D-man Alexei Bereglazov felt that his team gave up too many penalties and offered the Army Men’s imposing power play the opportunity to decide the game.

“We have to blame ourselves,” he said after the opening game. “SKA loves to attack, they are strong on the power play. Our penalties gave them chances.” 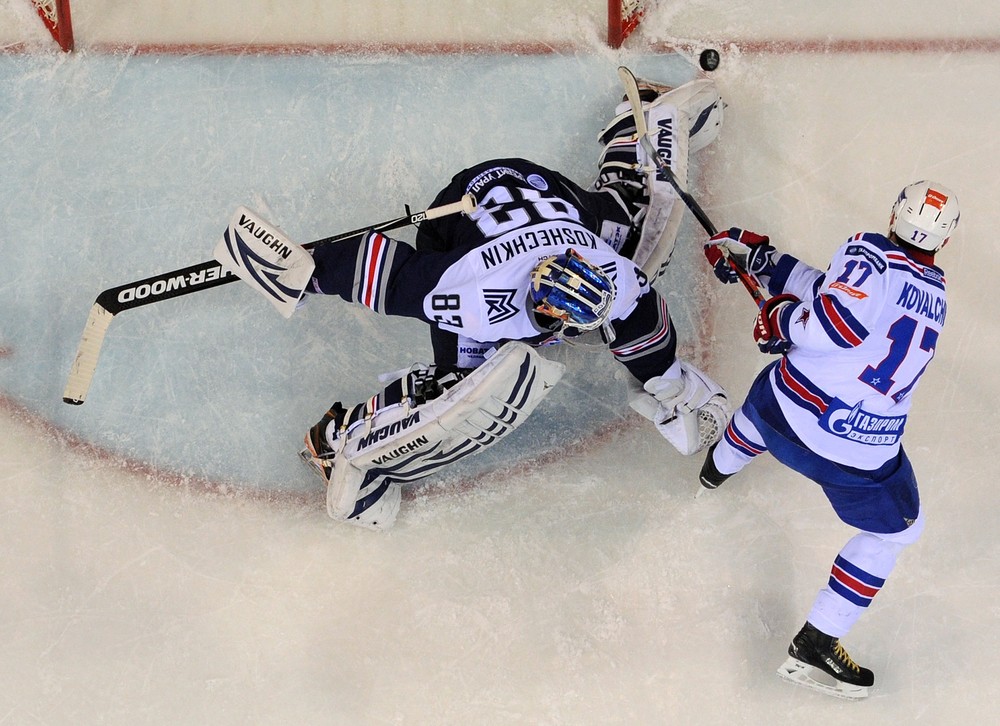 Jokerit Helsinki and Kunlun Red Star might be rivals in the KHL, but the two teams are looking forward to working together to help develop Chinese hockey in the coming seasons. Kunlun already has a strong Finnish accent, with several Nordic players in key roles last season under the guidance of Vladimir Yurzinov, a coach who made his name in the Finnish championship. Last week saw confirmation of a new partnership between the two teams, with Jokerit looking forward to helping Kunlun’s effort to improve the infrastructure and player base for China’s national teams. At the same, the Finnish club is hoping to boost its presence in the huge, largely untapped market for winter sports in China ahead of the 2022 Winter Olympics.

Meanwhile, Kunlun GM Vladimir Krechin spoke enthusiastically of the successes of the club’s first season. In an exclusive interview with KHL.ru he talked about a steady increase in interest during Red Star’s first season – and a steady increase in the knowledge of local fans as they caught their first glimpse of the game. “We did not play enough games in Beijing to arouse a strong interest and ensure a packed arena, but we could still feel the spectators getting more and more involved and responding to events on the ice. At least they understood that a goal at one end was good and at the other it was bad!

“Things are moving in the right direction, but everything takes time. We won’t wake up one morning and find that China is suddenly crazy over hockey.”

SKA is bidding to achieve sporting Nirvana in the coming days as the Petersburg team hunts down its second Gagarin Cup – and D-man Patrik Hersley reckons it’s all down to the environment in the locker room.

Hersley only arrived at the club in the fall after a trade away from Lokomotiv Yaroslavl, and spoke warmly of the unity and focus that keeps the team together – starting from the very top.

“Oleg Znarok, our head coach, is someone who wants to be with us, not above us, and he’s always fun to be around,” said the Swede. “I don’t know how people view it from the outside, but it’s great working with him. He’s a winner. At some clubs, maybe you get told how you should play, and then get yelled at if it doesn’t work out. Here we are all in it together – we want to win, he wants to win … it’s a great atmosphere.”

Hersley: "It’s just unbelievable to play on a team with that kind of talent"

It’s all about the Gagarin Cup Final. Can Magnitka battle back and defend its title, or will SKA power to its second grand final triumph? For Metallurg, there are some positive omens. This time last year, against CSKA, the team conceded five goals on its way to a game one loss, but still secured the series. The team also suffered defeat in the opening game in 2014, going down 0-3 at home to Lev Prague, but again recovered to take the series in seven.

However, 2014 was the last time SKA failed to win in post-season after victory in the opening game of a series. Indeed, the Petersburg team has only suffered that fate twice in KHL history, with the other occasion coming in 2011 with it gave up a 1-3 advantage against Atlant.

The action continues Monday, when game two takes place in Magnitogorsk (1700 Moscow time). Then we head to Petersburg on Wednesday and Friday, with game five scheduled on Sunday on Metallurg’s ice. If needed, the best-of-seven series will reach its climax next week.