The new direction for the League, given the green light by the Board of Directors in the meeting of the 24th of May, ignited a lot of discussion about the issues raised. Any new strategy involves changes, and some of these – a reduction in the number of clubs, a strict salary cap, and a rating system for member clubs - raised many questions among fans and media. With this in mind, the League has decided to address and elaborate on the key innovations it plans to introduce in the coming years.

Some of the major changes have been described as “revolutionary,” and they are undoubtedly significant. The number of participating teams in the League is to be reduced from 29 to 24, and the salary cap is planned to become steadily lower and “harder” i.e. with fewer exemptions, by the 2019-20 season. These changes are overdue and are needed to achieve the goals outlined in the KHL’s seven-year strategy - to raise the level of competition in the League, and as a result, increase spectator interest; to reduce the clubs’ dependence on government funding; to increase their commercial potential. Here we shall examine each of these important areas. As noted by Dinamo Riga Board of Directors Chairman Juris Savickis, a gradual lowering and tightening of the salary cap will make the League more competitive and improve the quality of hockey played in the KHL. League President Dmitry Chernyshenko, speaking immediately after the board meeting, outlined how this will be introduced:

The main reason is to reduce the vast gap between the budgets of the wealthy and not-so-wealthy clubs. At the moment, the richer clubs have eight times as much spending power as their poorer competitors, whereas in the leading European and North American sporting leagues (and not just in hockey), the big clubs enjoy a maximum threefold advantage over the smaller clubs in this respect. Therefore, the current situation in our League is a serious problem.

A few further words about our luxury tax penalties. Firstly, the funds received are not used by the League for its operational activities; instead, the money goes into the League’s stabilization fund. Secondly, we can only spend this money with the approval of the Board of Directors.

Currently, the fund has more money than at any time in the past, and it is reasonable to ask where this money goes. The answer is that some of it is spent on insurance for players, some on anti-doping programs, and some goes to help hockey veterans and on various other projects, such as the sledge hockey tournament which formed part of the 2017 Week of Hockey Stars in Ufa. From next season onwards, 60m rubles (approx. $1.06m) from this fund will go to the Russian Hockey Federation for spending on children’s and juniors’ sports, in accordance with the target program which, in turn, is subject to approved by the KHL Board of Directors. To introduce a strict salary cap for next season was impossible, as many clubs have signed long-term contracts with the players, and their budgets have been planned against a background of the current salary cap. If we had made these changes now, the clubs would be faced with re-negotiating or cancelling existing agreements, with the additional expense that would entail.

In any case, by the 2019-20 season there will be a strict wage ceiling of 800m rubles, falling to 600m rubles (approx. $10.5m) by 2020-21. At the same time, we will allow each club an exception for one star player, rising to two stars by the 2020-21 season. We will also examine the possibility of a 20% tax on bonuses and inducements, be they individual or team bonuses. The League will closely monitor the clubs’ adherence to the salary cap.

It is no secret that at KHL clubs there are many players on quite lucrative contracts, but their performances do not always merit the salaries. The lowering of the salary cap and the resulting departure of under-performing big-name players should lead to clubs devoting more resources to their most valuable players. 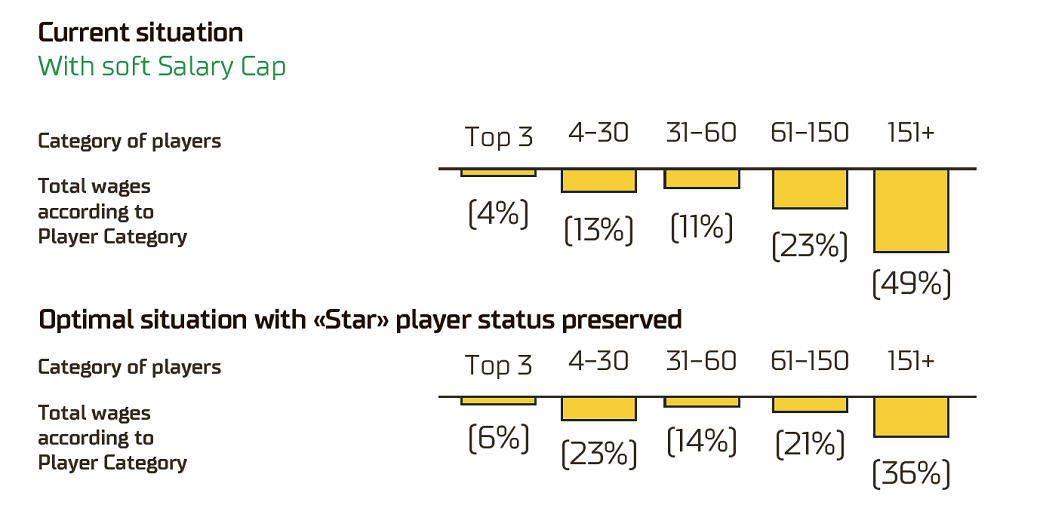 This should also lead to a more even distribution of top-class players among the clubs. The League will strive to create the conditions whereby we have star players at every team in the KHL.

At the same time, the League’s economists and experts have estimated that such a redistribution of talent could save the League around 5bn rubles (approx. $89m) per year by 2022-23. This windfall can be spent on developing children's hockey, improving clubs’ infrastructure, and other activities devoted to the development of the game throughout the regions.

Ratings as a means for objective assessment of clubs

The decision to remove Metallurg Novokuznetsk from the 2017-18 Championship was a painful one for many, but it was an inevitable part of the League’s further development. This was the first step in a phased reduction in the number of participating clubs to 24.

By which criteria will clubs be evaluated? I should first explain that clubs are not “excluded from the League.” Such a concept does not exist in the KHL Regulations. According to Article 8 of the Sporting Regulations, the list of member clubs for each season is determined and approved by the League’s Board of Directors prior to each season. The rating is designed so that the KHL Board of Directors can make decisions on the basis of an objective assessment of the clubs, and one which considers all criteria.

What kind of criteria? There are eight in all, and we have given each one a certain weighting. For instance, sporting achievement accounts for 30% of the rating. Then comes expenditure on labor costs, i.e. players’ wages (20%), TV demand (15%), the presence of government funding (10%), attendance as a percentage of arena capacity (10%), delays in payment of players’ wages (5%), the arena capacity (5%) and the local market potential (5%). The ratings are calculated on results recorded over the last three seasons.

Let us start with sporting achievement. It is very simple to calculate. We award clubs points based on their positions in the regular season standings over the past three years, and we award additional points for the post-season corresponding with the team’s progress in the playoffs. We add the points for the past three seasons and apply the 30% weighting to the total, thus reaching a final figure for the rating. We contrast the sporting achievement of the clubs with their expenditure on wages for the players, and thereby derive an average figure spent on assembling a team which can regularly compete for a playoff place and qualify for the post-season stage.

If a team overspends and underperforms, then the club loses points from its rating. And once again, the final figure takes into account the weighting of the given criterion, which in this case is 20%.

This aspect should also cause no confusion. The more money the club receives from the state or from state-owned enterprises, the more points it loses from its rating.

Late payment of wages to players

This is another criterion in which points are taken away. In the event of a club failing to pay its players on time, then the longer the delay, the more points are deducted from the club’s overall rating.

For example, the lengthy delay in payment of wages to Sibir’s players has pulled the Novosibirsk club down into a mid-table position in our rankings, even though the club has a modest budget and receives very little in state funding.

Experience gained in Russia and around the world tells us that for a club to make progress and increase revenue, it should have a modern arena able to accommodate at least 12,000 spectators. The League will use this figure when calculating points for this aspect of the rating. Clubs whose arena capacity falls short of this figure will lose points in direct proportion to the shortfall.

For example, three-time regular season champion CSKA has one of the healthiest budgets in the League, but playing in an arena which can only hold 5,600 spectators means the Army Men have a lower score on this aspect than do Torpedo, Avtomobilist and Ugra. This indicator should not give rise to many questions. The higher the percentage of seats which are empty at home games, the lower the club scores in this aspect.

Our analysis gave an average occupancy rate of 78% for all clubs in the KHL over the past three seasons. Those teams which attract an audience which regularly exceeds that figure will receive additional points, and clubs whose attendance falls short of the average will have points deducted accordingly.

The worst performer among Russian clubs was Metallurg Novokuznetsk, whose average attendance was a mere 43% of capacity.

This is perhaps the most difficult to calculate, although the principle is very simple. The more interest a club arouses among TV viewers, the higher the club’s resulting score on this factor.

Which factors does the League use to evaluate TV interest? Firstly, the number of matches featuring a given club which are broadcast, plus – of no less importance – the price paid by the broadcaster to cover the club’s games. The final figure, therefore, is a combination of the frequency of broadcasts and the revenue from these broadcasts. The eighth and final indicator is a figure based on the population of the city in which the KHL club plays, and considers the density of population and the proximity and ease of access of the public with regard to the team. It is really a measure of the geographical reach of the club and its potential fan base.

The idea underpinning this ranking is to aid the Board of Directors in making decisions concerning the structure of the League and when examining applications from clubs outside Russia.

It is a well-known fact all around the world that the major sporting leagues receive most of their funding from the sale of broadcasting rights, and therefore, this is the path to success for the KHL. When implementing the seven-year strategy, by 2023 the League needs to have achieved an increase of at least 30% in the audience for TV broadcasts of its matches. As it stands, only 25% of KHL matches generate high levels of interest among TV viewers. 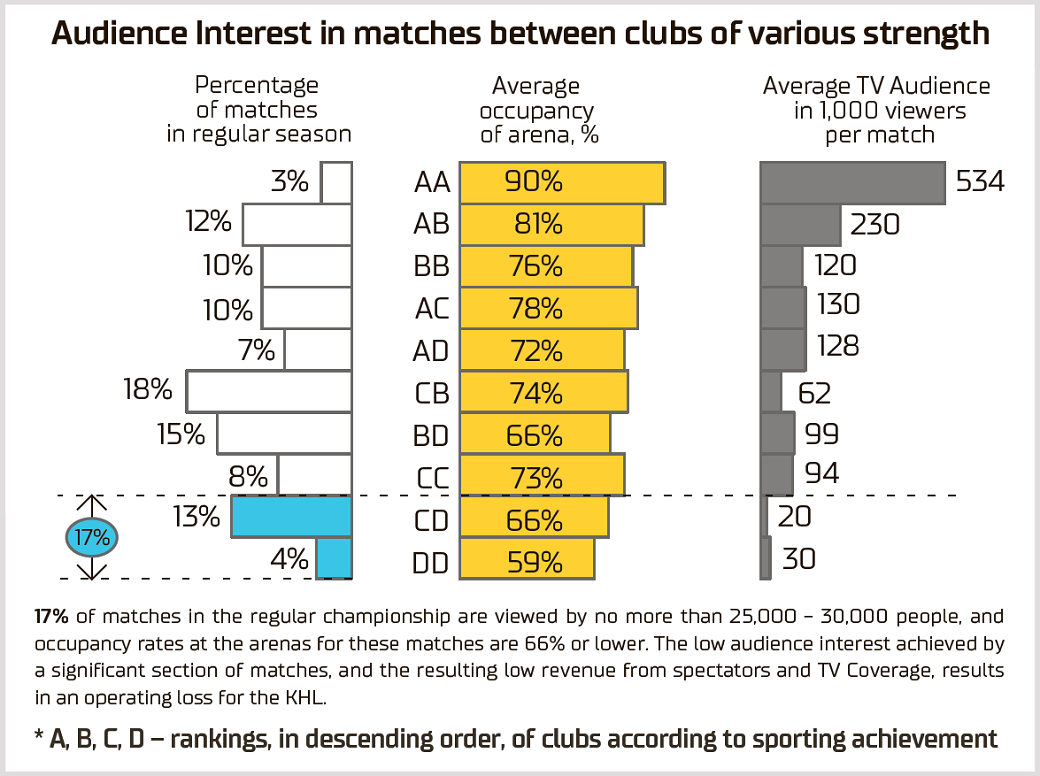 Games broadcast on TV which featured the League’s “weaker” clubs, i.e. those occupying the seven lowest places in our rankings, were seen by only 25,000 – 30,000 people, and this figure includes the fans in the arena. The resultant income from these games is sometimes as low as half or even a third of the cost of staging the game. Moreover, even the popular, leading clubs see a drop in TV interest for home games against the weaker teams, and are therefore suffering several dips in revenue during the season.

It is important that the KHL expand to other countries, and take in more clubs who can guarantee a consistently high spectator interest and who have a well-developed television market. Already, matches in the Kontinental Hockey League are broadcast in 33 countries, and new member clubs from these countries could become one of the main sources of income in the future. Revenue from the sale of TV rights could grow by around 37% by 2023. The KHL will continue to be the leading European league

The KHL will feature 24 competing clubs, and the stars of the League will be evenly distributed among the teams. The reduction in the number of participant clubs will be conducted on a sporting and financial basis. The new structure will allow us to streamline the match schedule, and will give us greater flexibility regarding the number of matches played. 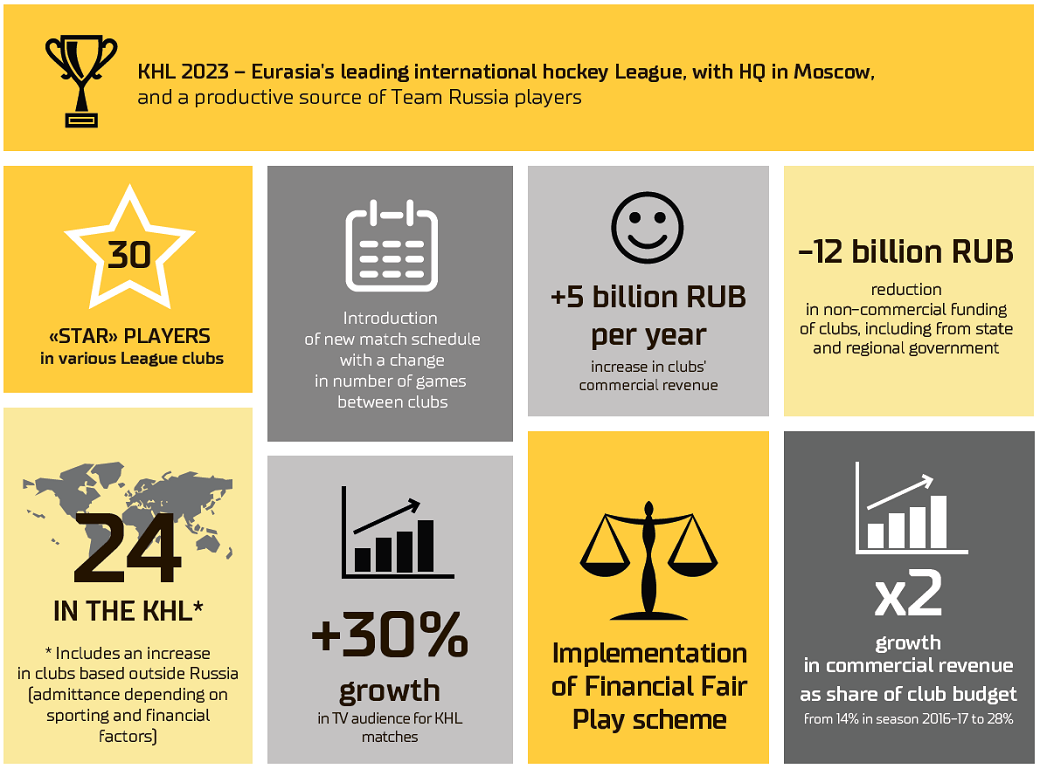 The increase in clubs’ commercial revenues should reach 5bn rubles (approx. $89m) per year. Direct and indirect funding from the state and the regions will be reduced by 12bn rubles (approx. $212m). Currently, the clubs’ commercial revenues account for only 10% of their budgets. Over the next seven years, we will increase this figure to 25%. The KHL also plans to introduce “financial Fair Play,” which we will outline in a separate article.