Which players hit 100 this week? And who’s a machine in Kazakhstan?

Two players at opposite ends of their KHL careers reached landmarks this week. Young forward Kirill Kaprizov got his 100th point in the league, while veteran defenseman Kirill Kulyash scored his 100th goal. Only Kevin Dallman has more markers from the blue line, and he took time out to talk about his new team-mate at Barys, Darren Dietz. SKA’s win over Jokerit in the week’s big game removed a potential challenge to Petersburg’s league record winning streak, but goalie Ryan Zapolski is still upbeat about the season – and paid tribute to the behind-the-scenes contribution of fellow goalie Karri Ramo.

SKA sees off a challenge to its record

SKA protected its newly-minted record winning streak thanks to an overtime victory against Jokerit in the game of the week. Pavel Datsyuk’s strike gave the league leader the verdict, and ended the Finns’ streak at 15 games – five short of SKA’s record.

But SKA had to do it the hard way to secure its landmark: Jokerit led three times in the game thanks to goals from Mika Niemi, Niklas Jensen and Antti Pihlstrom, but SKA kept plugging away and tied it up on Sergei Kalinin’s power play goal two minutes before the hooter. Datsyuk gave the defending champion the verdict, but head coach Oleg Znarok acknowledged that it will be hard to recover ahead of Monday’s clash with CSKA in Moscow. “It was a hard game for us, we poured a lot of emotion into it,” he admitted after the win.

CSKA hosts SKA on Monday evening in a repeat of this season’s Opening Cup match-up. The Moscow team saw its own eight-game winning streak end in overtime against Lokomotiv over the weekend. 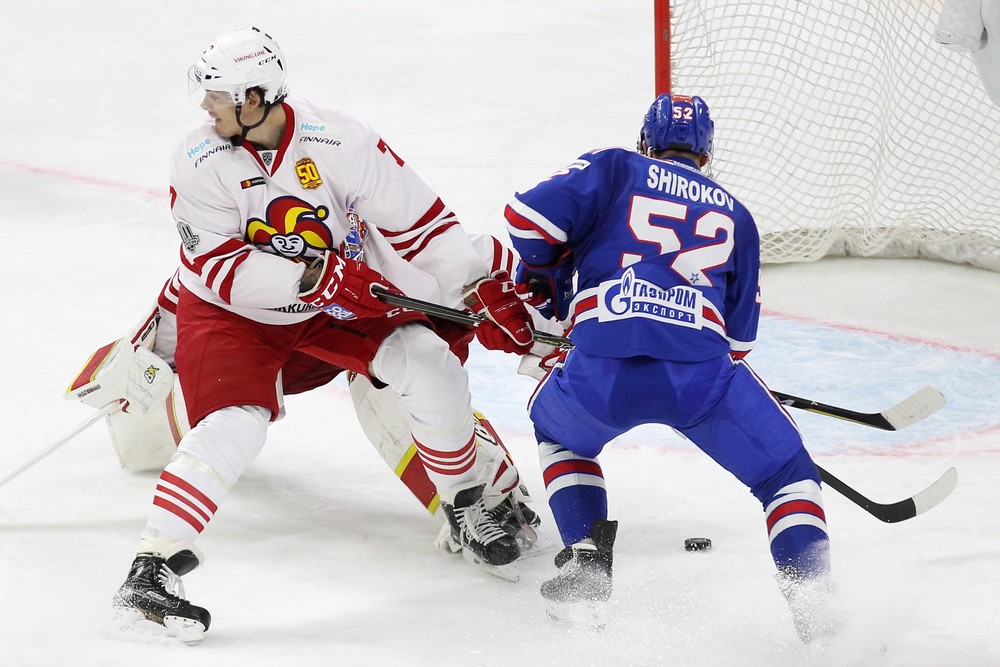 Jokerit’s winning run may have come to a narrow end in St. Petersburg, but goalie Ryan Zapolski remains hugely upbeat about the way the season is going. And with good reason – the third longest shut-out sequence in KHL history and a call-up to Team USA’s Deutschland Cup roster are putting him firmly in the Olympic frame. But the 30-year-old is also quick to credit Finland’s own Karri Ramo, used sparingly by Jokerit this season as he rehabilitates after recovering from a serious knee injury.

“Karri’s a great guy, and it gave me a real boost when I heard he was joining our team,” Zapolski said in an exclusive interview with KHL.ru. “He has had a lot of success in this league, and he's played in the NHL. He's the kind of guy who's invaluable to have in the locker room. I talk with him after every game, and I've learned a lot from him.”

Ryan Zapolski: We have all we need to match SKA's winning streak 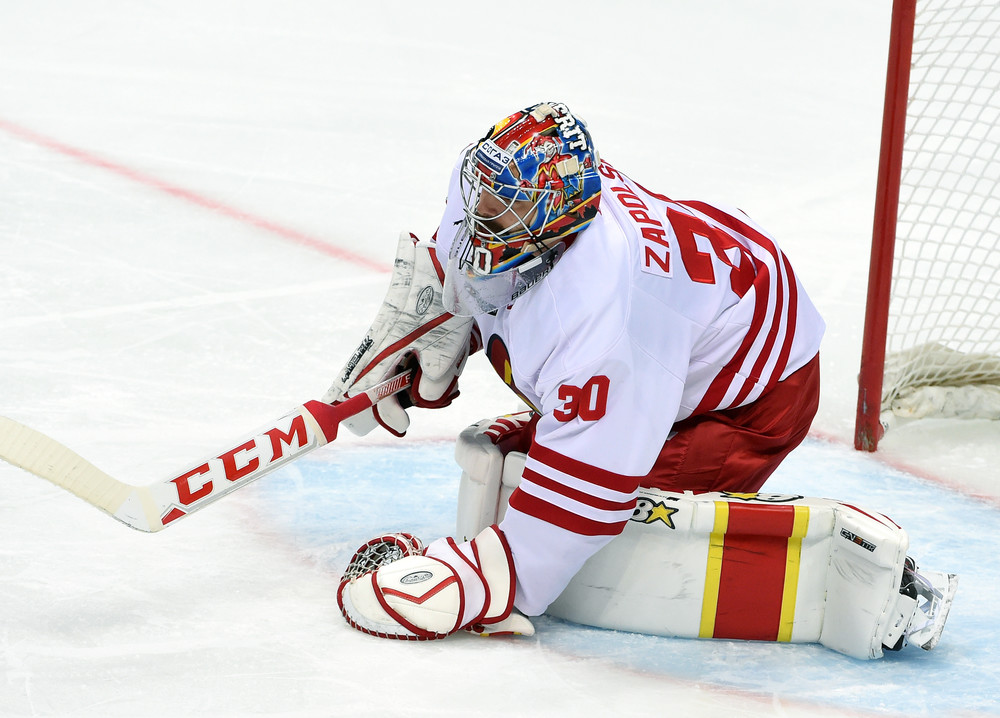 Dallman the sorcerer picks out an apprentice

Kevin Dallman, the rock at the heart of the Barys defense, is one of the KHL’s longest-serving imports. A fixture in Kazakhstan, he recently completed a run of 200 consecutive appearances in the league – and didn’t even notice the landmark until it showed up on the club’s social media. But the KHL’s top-scoring D-man of all time reckons he might have found the man to inherit his crown in the future – a 24-year-old Canadian ‘machine’.

Darren Dietz arrived in Astana this summer, looking for new options as his NHL career seemed to be fizzling out. The KHL has proved very much to his liking and Dallman, who also swapped NHL prospects for the experience of playing in our league, recognizes something of himself in his new team-mate.

“Darren’s adapted really well to the KHL,” he said in an exclusive interview with KHL.ru. “At first, sure, there were a few bumps, but look how he’s done since then! He’s just a machine! He reminds me of how I played when I first came to the league 10 years ago. He’s overflowing with energy, battling for every inch of the ice. He takes on so much responsibility for the team that sometimes I can even afford to take a back seat, as the senior partner. Or maybe just the old guy!” 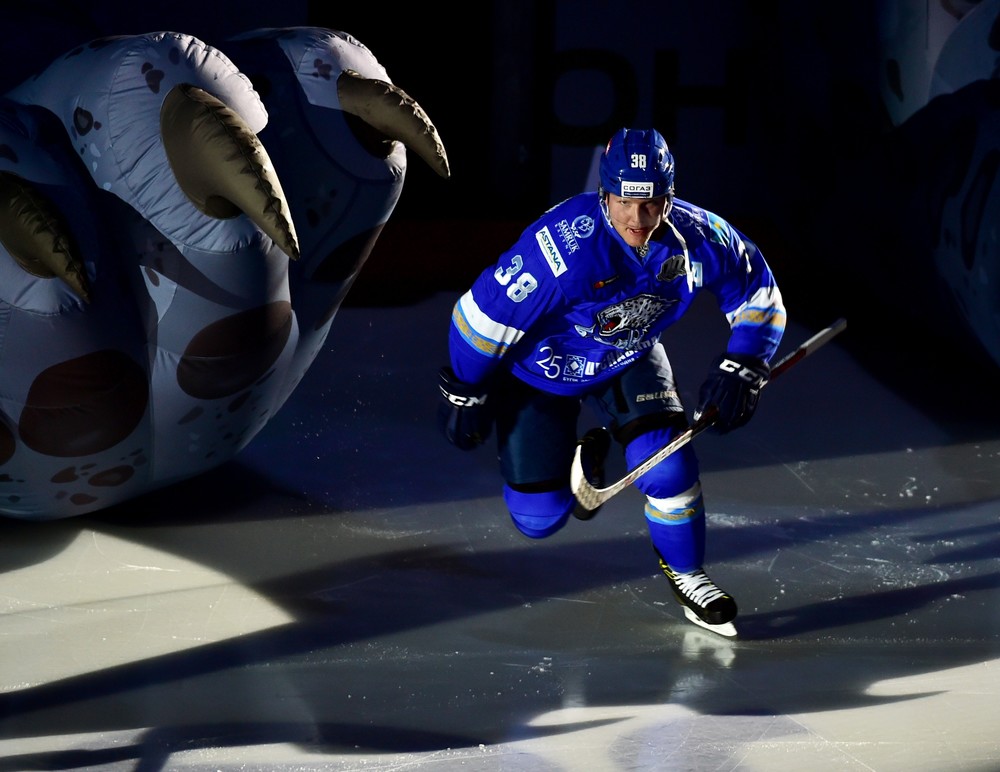 Two players at different ends of their careers achieved landmarks during the week. Kirill Kaprizov, CSKA’s super-talented youngster, notched his 100th KHL point in that 7-2 victory in Magnitogorsk. Kaprizov, still only 20, made his KHL debut back in 2014-15 and began attracting attention the following year with 27 points in 53 games for a struggling Metallurg Novokuznetsk team. That earned the Minnesota Wild prospect a move to Salavat Yulaev, where he exploded for club and country. His 42-point haul in the KHL would probably have beaten Evgeny Kuznetsov’s league record for a junior, had it not been for the games he missed to play at the World Juniors. In Canada, he had 12 points in seven games, bossing the tournament scoring on his way to a bronze medal. Now at CSKA, he’s the scoring leader for the Army Men, with 22 (12+10) points for the season.

Denis Kulyash, 34, also lists CSKA and Salavat Yulaev among his former clubs, but his 100th KHL goal came for Avtomobilist against the Ufa team. In 531 games, dating back to the league’s debut season, he’s scored 221 (101+120) points, making him the top-goalscoring Russian defenseman in the competition’s history. Only Kevin Dallman (132) has scored more goals. 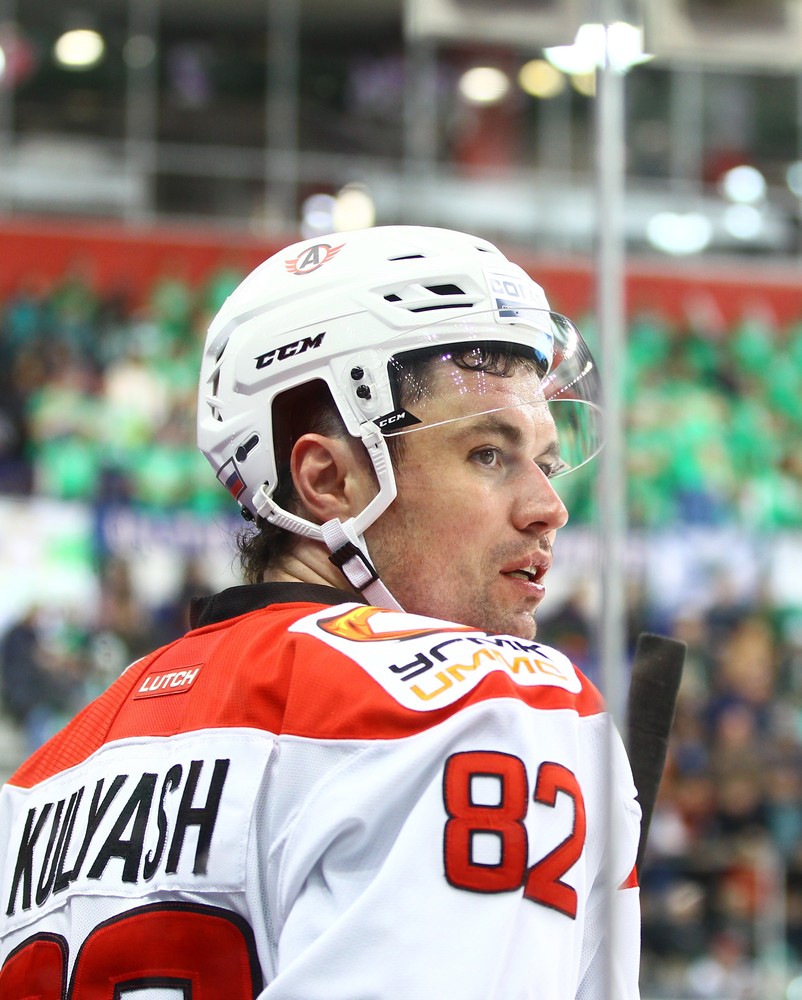 Metallurg Magnitogorsk expects to be battling it out for leadership of the Eastern Conference. It doesn’t expect to be on the receiving end of 2-7 or 0-4 scorelines. This week, though, it suffered both those outcomes, giving up seven goals at home to CSKA and facing a shut-out loss at Ak Bars. Sixth place in the conference, 10 points behind top dog Ak Bars, is definitely not what last season’s Gagarin Cup finalist expected – so what’s the problem?

The main issue has been defense. Few teams could lose Chris Lee, Viktor Antipin and Alexei Bereglazov and carry on without a hitch, and Magnitka’s problems have been further hampered by injuries. Denis Denisov and Yaroslav Khabarov have both missed around a third of the games this season, the experienced Alexander Budkin has been out for nine games after feeling the brunt of Stepan Zakharchuk’s notorious hit, and now talented youngster Grigory Dronov could miss action after picking up a knock in Sunday’s loss in Kazan. The signing of Nikita Pivtsakin from CSKA early in the season has helped get more bodies on the ice, but for Ilya Vorobyov’s team, a spell of stability among those pairings on the blue line looks like the key to returning to a more accustomed position in the rankings. 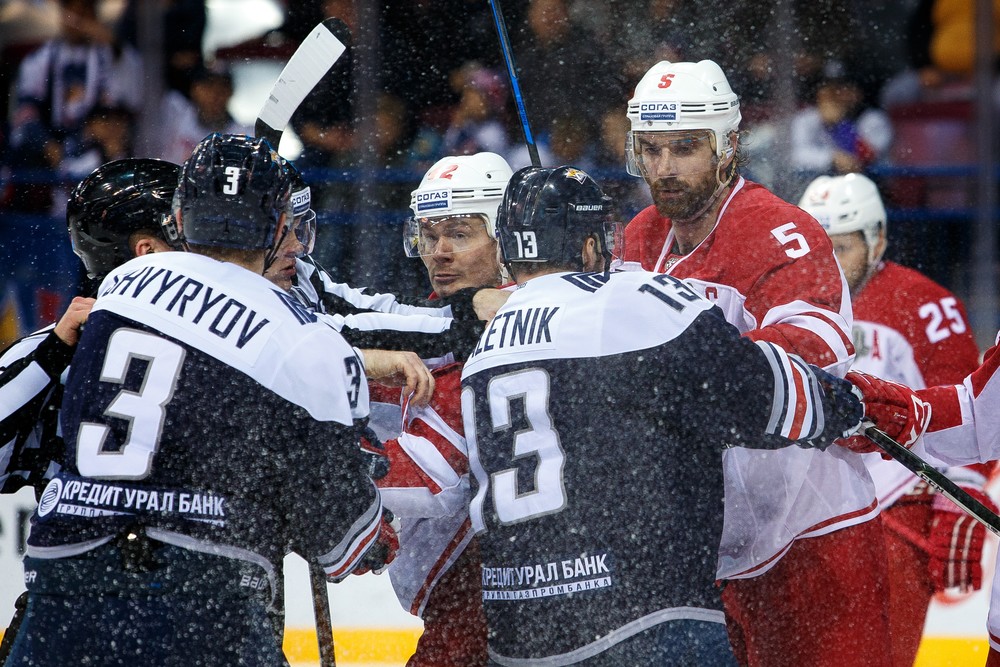 Alexei Morozov at World Festival of Youth and return of Artyom Manukyan. JHL week in review

JHL executive director Alexei Morozov held a master-class at World Festival of Youth And Students (WFYS). Russian Federation of Hockey organized a get-to-know rink where professional coaches and famous players held 14 master-classes for students from Russia and other countries.

Alexei Morozov visited Iceberg practice rink at Volosozhar and Trankov Figure Skating Center. Master-class participants had a chance to get autographs and take a picture with the 2-time World Champion, while hockey players asked for precious advice.

Top scorer of the last regular season Artyom Manukyan returned to Omskiye Yastreby and helped his team to win over Reaktor scoring four goals in the process. 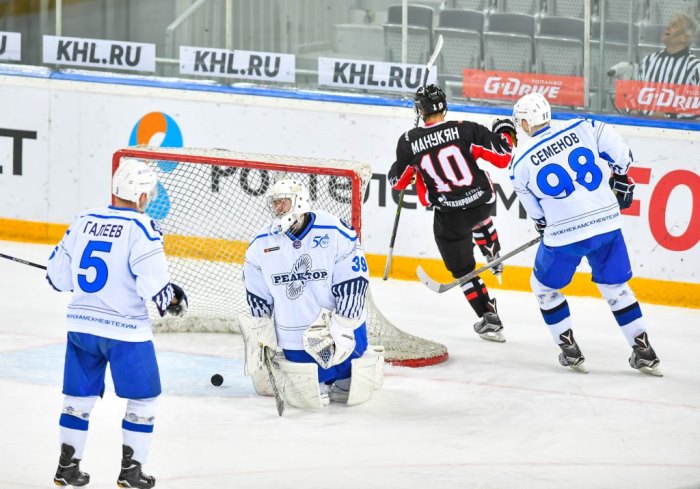 Leaders of the player statistics after Series are “Tornado” forwards Anna Shokhina with 12 (4+8) points, Alevtina Shtareva with 10 (6+4) points and Elena Dergachyova with 7 (0+7) points. 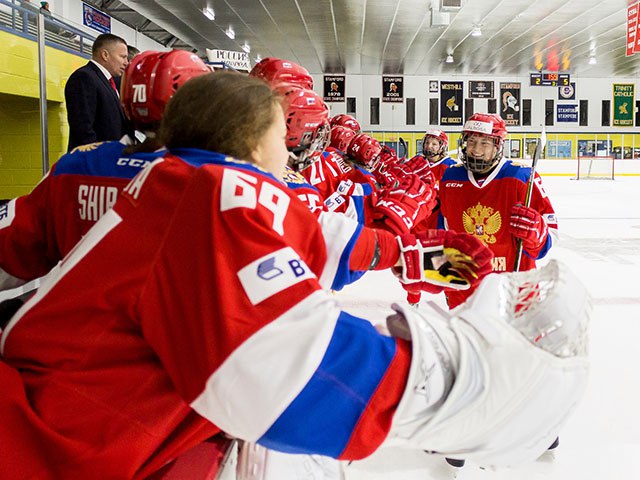