In the Olympic men’s tournament, Russia marches on – a 6-1 win over Norway cements the team’s status as pre-tournament favorite. In the women’s event, though, there was disappointment as the Russians missed out in the bronze medal game, going down 2-3 against Finland.

It was also the end of Sweden’s Olympic journey. The Tre Kronor, Linus Omark, Patrik Hersley and all, fell to Germany in one of the greatest shocks of modern Olympic history. The Germans go on to face Canada in the semis, Russia plays the Czechs.

Russia’s in-form team had little difficulty in dispatching Norway and advancing to its first Olympic semi-final since 2006. However, a convincing 6-1 margin was not enough to persuade the Russian players that the team was reaching its peak form.

“We completely lost our way in the second period,” said defenceman Nikita Nesterov, finding faults despite getting his first goal of the Games. “We stepped back and we need to be better. We turned over the puck too often in centre ice, and we made stupid decisions.”

Three first period goals – Mikhail Grigorenko, Nikita Gusev and Vyacheslav Voynov finding the target – set the tone for a comfortable victory over a Norwegian team that never threatened to be competitive. The Russians were so dominant that they scored more goals than they allowed shots on Vasily Koshechkin’s net in the first period. 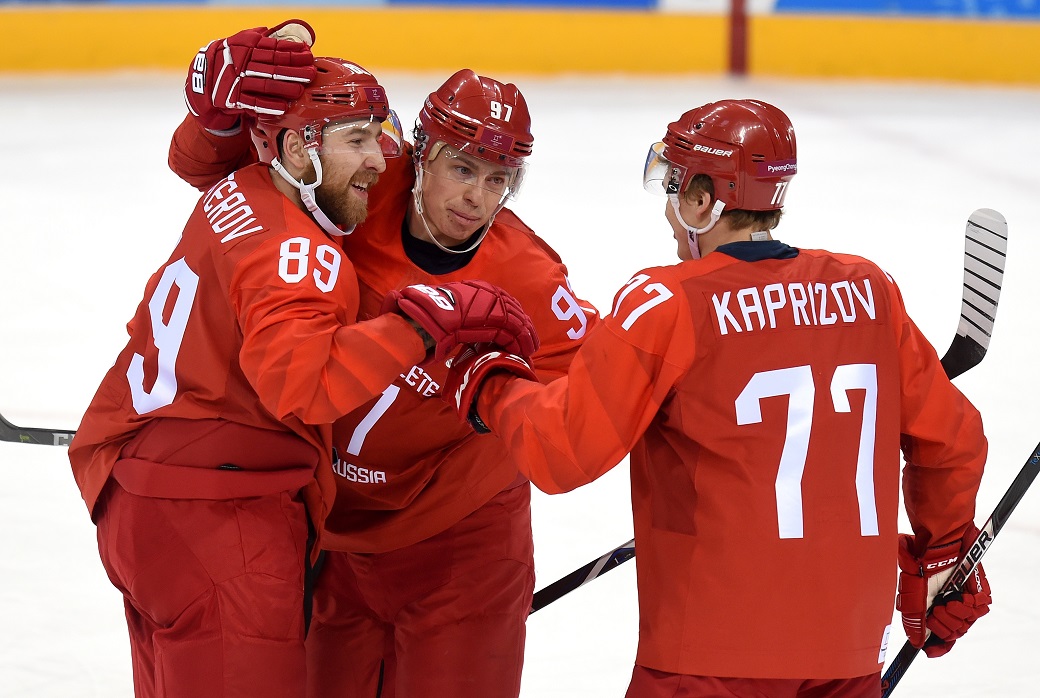 Norway got a goal back at the in the second period when Alexander Bonsaksen – whose overtime winner against Slovenia sent his team into this game – shot past an unsighted Koshechkin after the Olimb brothers combined. But Bonsaksen quickly found himself in the penalty box and Russia converted the power play when Ilya Kovalchuk fed Sergei Kalinin on the doorstep to make it 4-1. And the Norwegian’s afternoon didn’t much improve: he cancelled out his own goal when he inadvertently diverted a Nesterov pass into his own net. As Siouxie Sioux rang out around the arena, Norway’s hopes lay in dust. The final frame saw Ivan Telegin add a sixth goal.

Russian coach Oleg Znarok was in typically waspish mood after the game. “Why should I look happy now? Was that the final?” he asked. “If we beat the Norwegians, is that it?”

The win sends Znarok’s men into a semi-final match-up against the Czech Republic as the team closes on a first Olympic medal since 2002’s bronze in Salt Lake City. 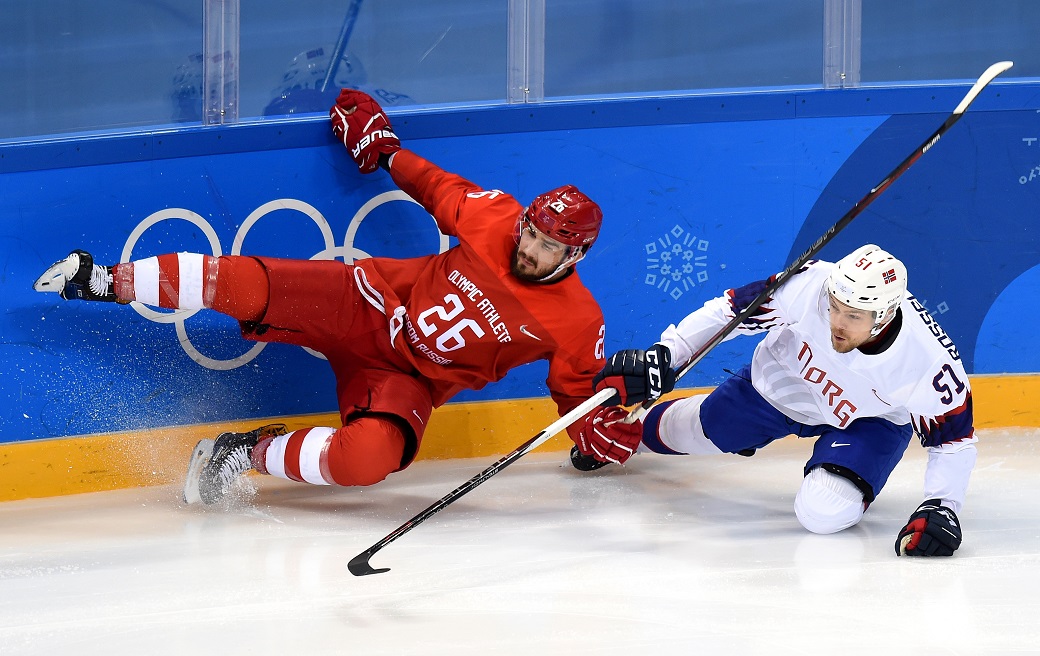 Petr Koukal fired the Czech Republic into its first Olympic semi-final since 2006. The Avtomobilist man potted the shoot-out winner against the USA after a 2-2 tie in the teams’ quarter-final match-up in Gangneung.

The Avotmobilist man had also scored in a group stage shoot-out against Canada, and told reporters that the team had quickly shuffled its running order to psych out USA goalie Ryan Zapolski. “I was talking to the guys on the bench,” Koukal said “The goalie saw (us) play Canada in a shootout in the group and I was asking the guys about my shootout, and all the guys did a little switch (in order) beforehand and I shot, and I’m so happy it was the goal.”

Traktor’s Pavel Francouz stopped all five American attempts in the shoot-out and he reckoned that Harvard College forward Ryan Donato was the toughest to face. “He was all over me already, but he kind of lost the puck in the end, so I was lucky there too,” said the Czech goalie.

Donato had given the USA an early lead, but goals from Jan Kolar (Amur) and Tomas Kundratek (Torpedo) put the Czechs up 2-1 before a short-handed strike from Jim Slater tied it up. Jokerit’s Brian O’Neill almost won it late on when he dinged Francouz’s crossbar, but the Czechs survived to take it to a shoot-out.

Zapolski summed up the USA’s tournament. “We competed as hard as we could,” he said. “We battled to the end. Our legs weren't really there to start the game but we gave it everything we had. We tied it up and it was a close game, and it could have gone either way at the end. I'm pretty proud of the effort we put in.” 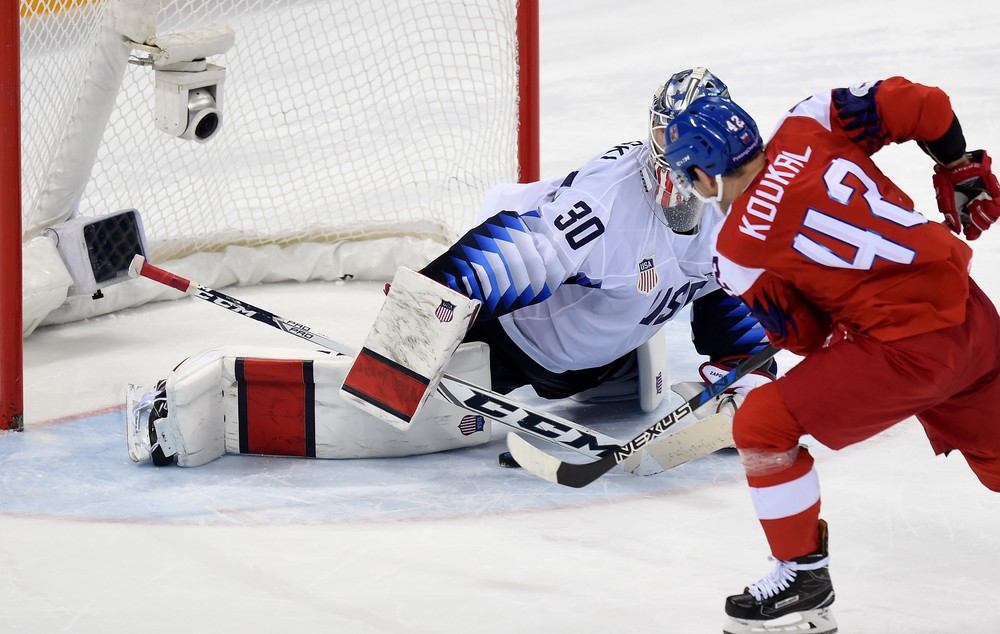 The other semi-final pits Canada against Germany after a sensational defeat for Sweden in overtime and a hard-fought 1-0 for Canada over the Finns.

Sochi forward O’Dell paid tribute to Canada’s work ethic in grinding out another win as it looks to secure a third successive gold medal.

“When you see guys going down, getting crazy blocks on shots, it gets the whole bench up,” he said. “That's just the Canada way, that's how we play. We're a hard-nosed team and when it comes down to it we're going to do anything we can to get the win and it paid off tonight.” 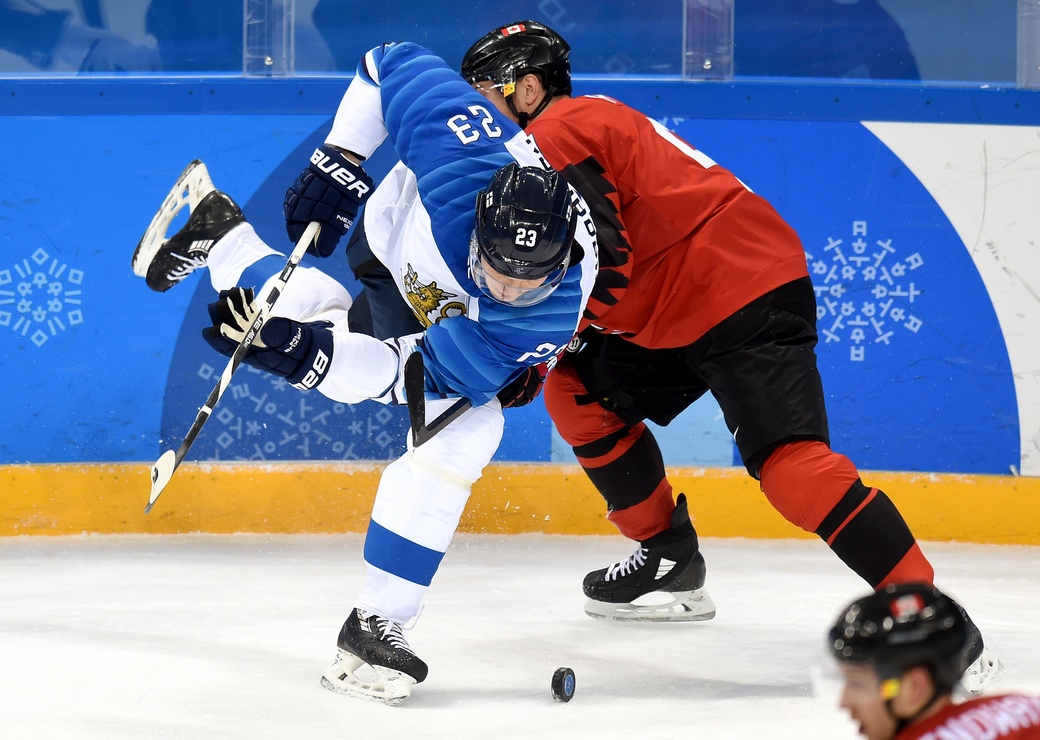 Sweden was the hot favorite to go on to the last four, but Germany sprang a huge surprise. Two quick goals in the first period saw the Germans ahead through Christian Ehrhoff and Marcel Noebels. Sweden hauled it back to 3-3 in the third, with Anton Lander and Patrik Hersley among the scorers, but Patrick Reimer delivered a stunning overtime winner to send the Germans through.

Even then, Reimer's night was not over – the goal was reviewed, just to keep the nerves jangling. “I knew right away they couldn't call that off,” he said. “I was pretty confident but it was an intense 30 seconds or minute waiting for the official call.” 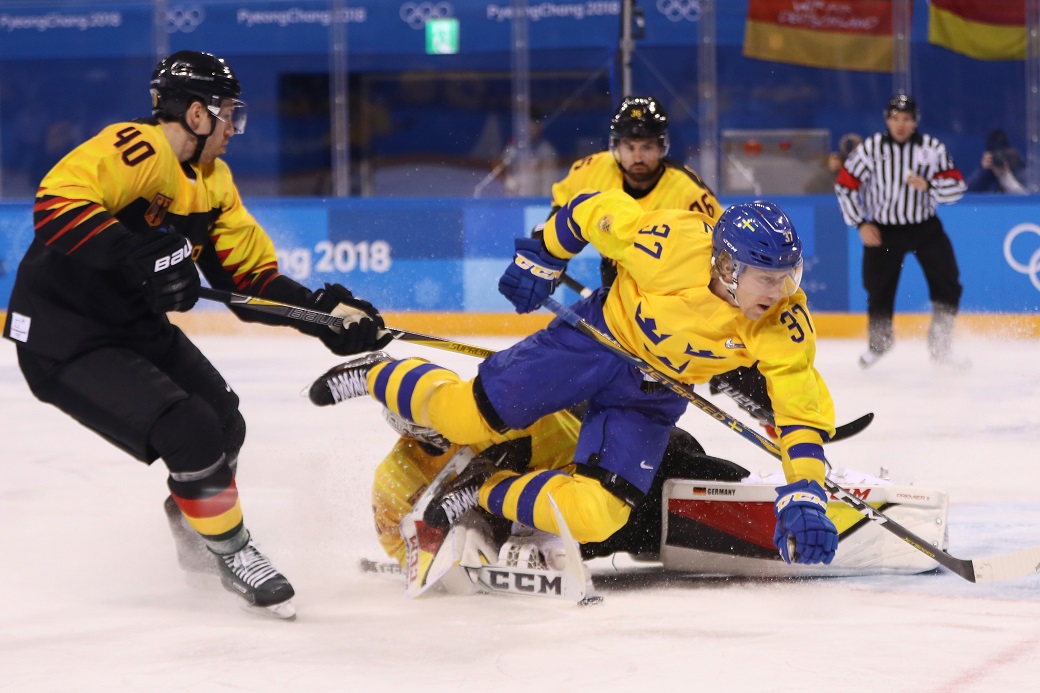 The women’s bronze medal game ended in a narrow, painful defeat for Russia against Finland, denying the team its first ever Olympic medal in the sport.

The Finns won a hard-fought battle 3-2 to claim third place in the competition. Goals from Olga Sosina and Lyudmila Belyakova weren’t enough to save the game against a Finnish side that took its chances.

Despite the loss, head coach Alexei Chistyakov believes that the tournament has further raised the profile of the women’s game – and called on hockey bosses to get behind the future development of women’s hockey across the country.

“We had some real positives from the Games, but its clear to everyone that we don’t have enough teams in the Women’s Hockey League,” he said. “In several hockey regions, the directors don’t pay enough attention to women’s hockey and don’t want to help with its development. I don’t really understand why not.

“It’s clear that, for some men in Russia, hockey is not a women’s game. But I think these Olympics, and the performance of our team as they represented their country, will start to change the minds of at least some of the population.”

Team captain Sosina added: “We really felt the support from our fans today. We had chances to win it, but as you could see, we fell just short. I’m just sorry that we couldn’t live up to our hopes.” 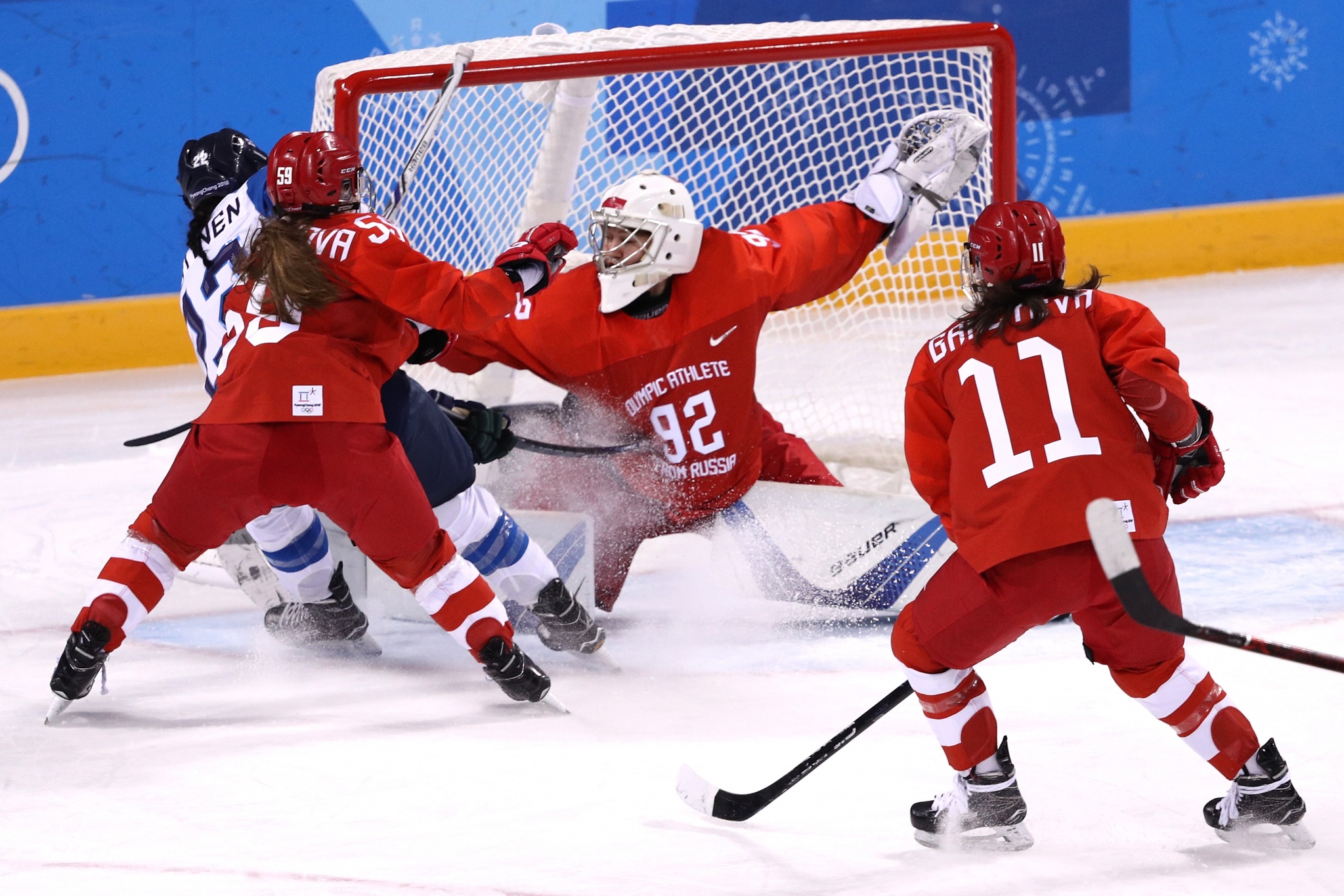