KHL.ru begins its team-by-team review of the tenth season of the KHL Championship with a look back on how the campaign panned out for the men from Kazan, who last month became the first team in history to celebrate a third Gagarin Cup triumph.

Before the big anniversary Championship of the KHL got underway, most of the fans, and certainly, many of the experts, predicted that when spring came around the Cup would be held aloft by either SKA or CSKA. On paper, the rosters of the Petersburg and Moscow Army Men did indeed look impressive, and their battle for supremacy in the Western Conference resembled a skirmish on the eve of a war, but of course, hockey is played on ice, not on paper, and on Sunday, the 22nd of April, 2018, Ak Bars Kazan became the first three-time winner of the Gagarin Cup. How did the team from Tatarstan do it? 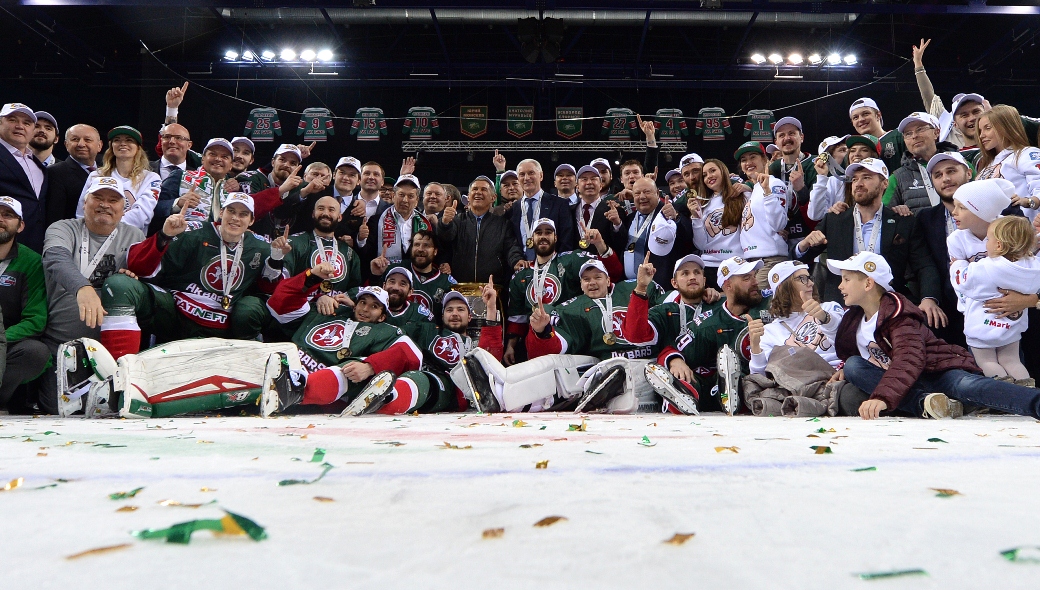 The consolidation of the Kazan roster during the summer of 2017 caused many to ponder whether the glass was half-full or half-empty. On the optimists' side, the experience of Andrei Markov would be invaluable, but pessimists simply noted that he was not getting any younger. Yes, Stanislav Galiyev was undoubtedly a talented player, but the forward had made little impact in North America. Another plus point was the arrival of fresh talent departing Novokuznetsk, but few of them were tried and tested at the top level. Finally, the return of Danis Zaripov delighted all in Kazan, but his homecoming was marred by a positive drug test and the resulting suspension.

The regular season began, and the team lived up to the Jekyll-and-Hyde nature of the preseason predictions, stringing together four regulation time wins in the first four games before suffering a 0-5 hammering at home to HC Sochi. There were more slips and pitfalls to follow – a convincing defeat by Lokomotiv, shutout losses against CSKA and Neftekhimik, surprise reverses against Sibir and Severstal, and even some bad patches: five defeats in six matches in November, then four from five in December, but the discerning observer could see that Bilyaletdinov and his staff were sculpting and honing a team with its predatory eyes on the knockout stage. 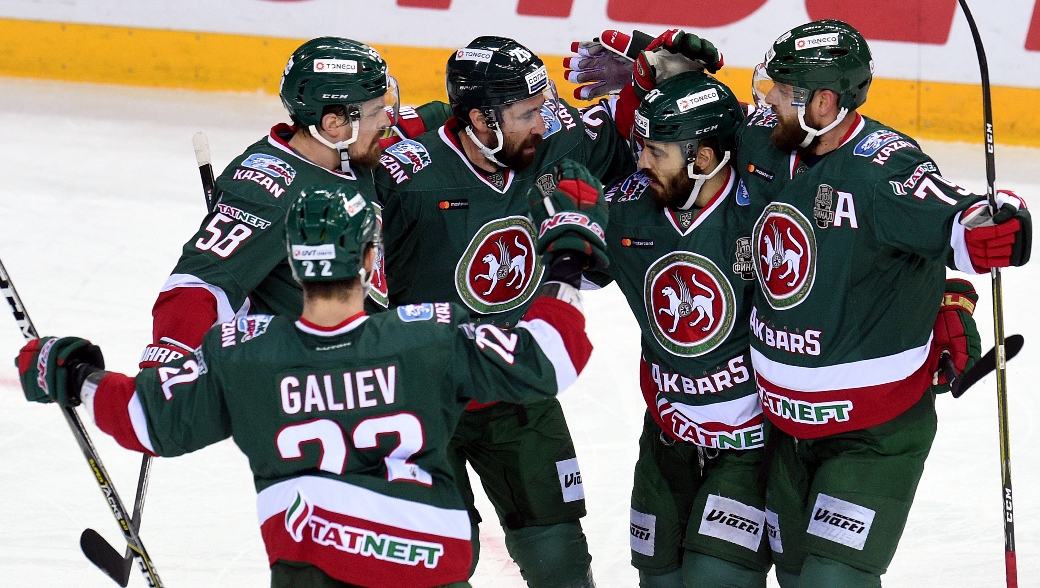 With each passing game, local boy Emil Garipov grew in confidence and this spread to the skaters in front of him. Stanislav Galiyev gradually grew accustomed to the larger rink and forged an understanding with one of the best centers in the League – Vladimir Tkachyov. The Foreign Legionnaires – Jiri Sekac and new arrival Anton Lander – justified the club's faith in them. An exonerated Danis Zaripov returned to the ice, and despite an injury-and-Olympics-enforced absence totalling two months, Justin Azevedo was back and hungry for goals. All these factors came together and propelled Ak Bars to first place in the Eastern Conference.

In the opening round of the playoffs, the Kazan team faced the tigers of Amur, who had sharpened their claws during the fierce battle for qualification. The Khabarovsk Men proved to be worthy opposition, but Ak Bars progressed unscathed and then conquered an even greater danger: Sergei Mozyakin and the men from Magnitogorsk. However, by this time the White Leopards had gained momentum, and after losing only one game to the men from Steel City, Ak Bars charged into the Conference final and swept Traktor aside in four games. 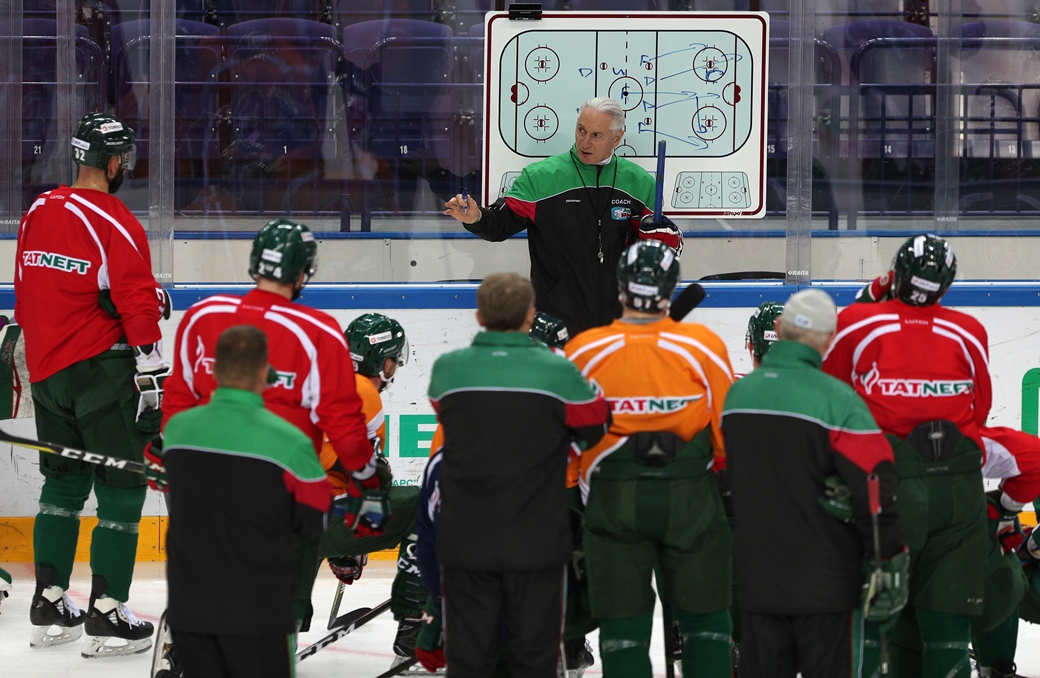 By this time, Azevedo had already secured for himself the title of playoff MVP, Garipov seemed invincible between the pipes, Galiyev, Tkachyov and Zaripov were combining like a Swiss timepiece, the defense was highly disciplined and captain Alexander Svitov was holding everything together. The final and most formidable hurdle, CSKA, was defeated with ruthless efficiency, and the club which had captured the first and second Gagarin Cups celebrated victory in the tenth jubilee Championship.

The coaching wizardry of Zinetula Bilyaletdinov seems to know no bounds. No-one can win every time, all the time – that, at least, is something on which most sports fans can agree – but to keep a team so fiercely competitive, to the extent that it has been a near-permanent contender every single year, and for a decade, is a truly remarkable feat of coaching. His only break from his labor as Ak Bars boss came when he was asked to coach the national team, but he soon returned and his trophy cabinet now displays three Gagarin Cups – a record matched by Oleg Znarok, admittedly, but the Ak Bars boss won all his silverware with just the one club. 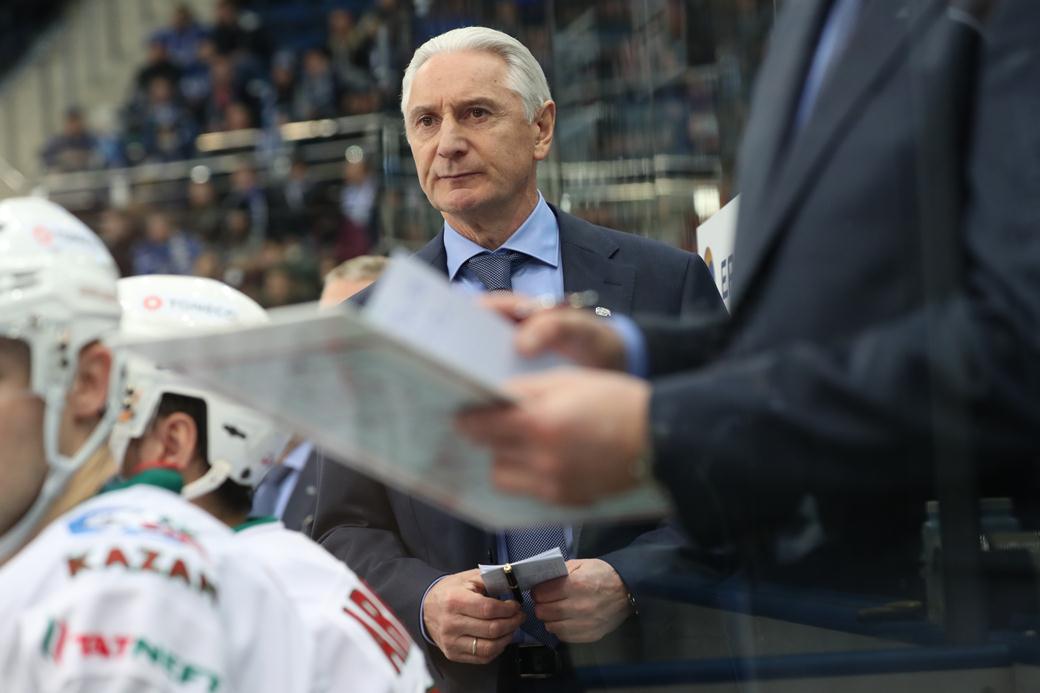 Curiously, over the whole of the Kazan team's victorious playoff campaign, the opposition was only kept off the scoreboard twice – in the very first and the very last, decisive game, and we are bound to name the latter as the champion's finest match of the season. Another curiosity – on both previous occasions when Ak Bars won the Gagarin Cup, the series was settled by a shutout victory. This time around we were treated to a truly epic battle, with the Army Men throwing everything at the Kazan defense, only for Canada's Rob Klinkhammer to strike the killer blow at the other end in the 42nd minute.

This category is particularly hard to fill, as Ak Bars produced such relentlessly powerful and disciplined hockey in the playoffs. For a truly awful night, we have to go back to early September, and that shock 0-5 thrashing on home ice at the hands of HC Sochi, which included a torrid final 14 minutes in which the men from the Black Sea struck four unanswered goals. Garipov, by the way, kept his place between the pipes, and was on the receiving end of all five goals.

In the regular season, 26-year-old forward Stanislav Galiyev tallied 12 goals in 52 games, and in the playoffs he scored 10 in 19 outings, thus becoming the top sniper of the knockout stage for the spring. Galiyev fully justified his decision to return to Russia, a step he took last summer after 10 years in North America, where he was unable to claim a regular first-team place with the Washington Capitals. Before the season got underway, he told KHL.ru: “I want to win the Gagarin Cup in my first season, and why shouldn't it happen?” Why indeed. Stanislav certainly chose the right team.

As for the top scorer and MVP of the playoffs, Justin Azevedo was already an established star, as was Danis Zaripov, who claimed a record fifth Gagarin Cup. 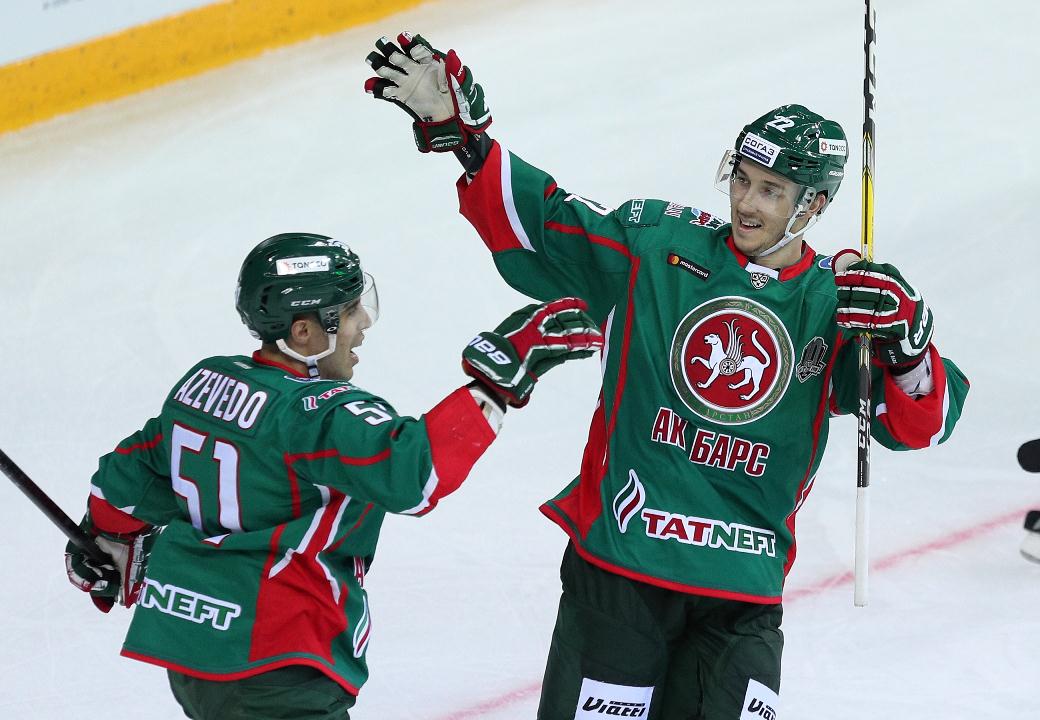 This category is even harder to fill than the “worst match” nomination, given the success of the Ak Bars collective and a coach known for instilling disciplined team play. In an interview given after the end of the playoffs, Zinetula Bilyaletdinov himself confirmed this: “I have always and will always defend all of my guys. They're my players, in my team. People who give their all to hockey. I cannot work any other way.” And this is strongly the case when everyone, without exception, played his part in the team's stunning success.