KHL.ru continues its team-by-team review of the tenth season of the KHL Championship with a look back at how the campaign unfolded for the reigning champion, SKA Saint Petersburg, a firm favorite among the experts, but whose attempt to defend its crown foundered in the Western Conference final.

SKA went into the season firmly established as the favorite among favorites. Few of the pundits predicted problems for Petersburg's Army Men, despite the possible pitfalls during an Olympic season for a roster studded with stars who would be on regular international duty, and that strange, recurring curse in KHL history where the winners of the marathon that is the regular season invariably stumble in the sprint that is the playoffs. Nor were there any problems with major changes in the roster. Granted, the NHL attracted Evgeny Dadonov and Vadim Shipachyov (soon to return), but the only other departure was Steve Moses, while the new arrivals could also be counted on the fingers of one hand – in came Maxim Karpov, Sergei Kalinin, Vladislav Gavrikov, and Sweden's David Rundblad.

SKA, as reigning champion, hosted the curtain-raiser for the new season, the Opening Cup, and secured a confidence-boosting 4-2 win over CSKA. Few could have foreseen what followed, even among those pundits certain of SKA's success. The victory over Moscow's Army Men was the start of a record-breaking 20-game winning streak, 17 of which were wrapped up in regulation time. The run of victories was eventually halted by Sergei Zubov's HC Sochi, who pulled off a surprise triumph at the Petersburg Ice Palace. The men from the Black Sea later added insult to injury by defeating SKA again in the return match in Sochi. To no-one's surprise, the gap at the top of the standings opened up by this stunning run was never to be seriously threatened. SKA stormed to the regular season title and amassed 138 points, a full 14 ahead of the nearest rival, CSKA. 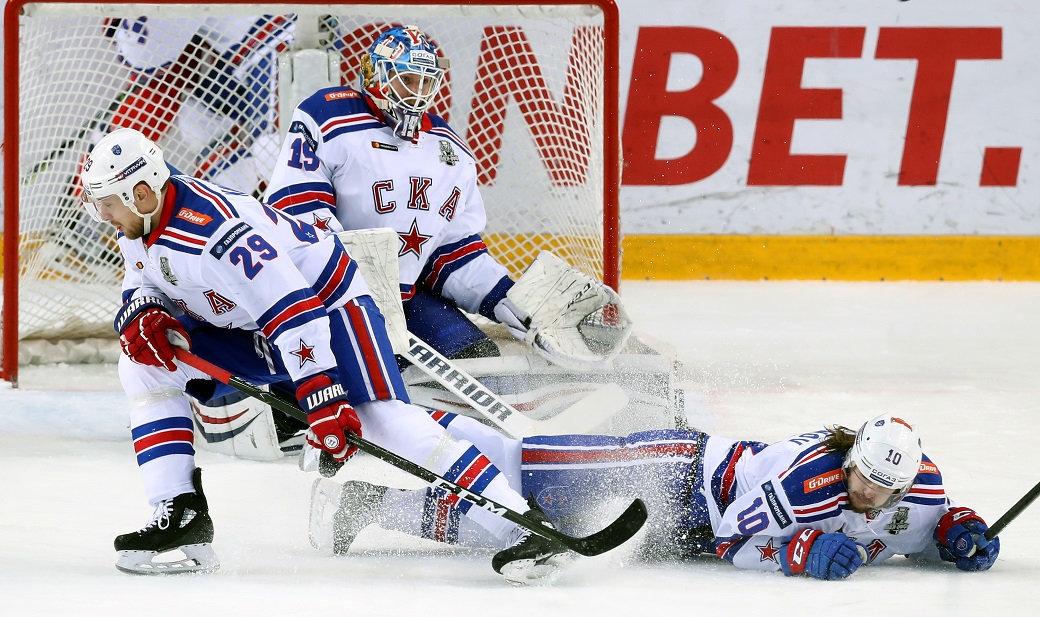 In the first round of the playoffs, SKA encountered Severstal, a team whose ambitions were so modest that an eighth-place finish was celebrated as a minor miracle. No-one gave the Cherepovets collective a chance of progressing any further, and indeed, SKA duly recorded a 4-0 series sweep, but to their eternal credit the outsiders, led by young coach Alexander Gulyavtsev and captained by the highly experienced Dmitry Kagarlitsky, fought tenaciously, and twice (in Games 1 and 3) even took the Petersburg Men to overtime. 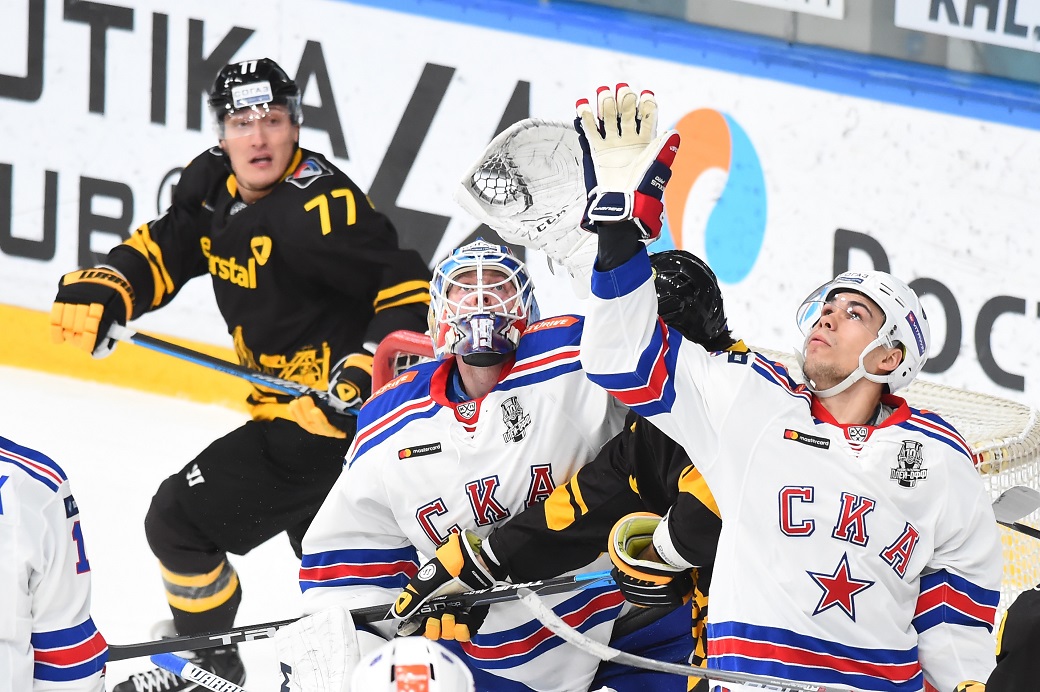 The Conference semi-final was a re-match of the Conference final of the previous year, against Lokomotiv, this time under the stewardship of Dmitry Kvartalnov. The Gagarin Cup holders started in fine fashion, inflicting a 4-0 defeat on the Railwaymen, but Game 2 resulted in a surprise 2-1 win for the visitors. That was to be the end of the intrigue in the series, however. Mikko Koskinen was in majestic form guarding the Petersburg Army Men's net, and in the next three games he allowed only two goals as SKA clinched a 4-1 series win.

The battle for Western Conference supremacy was, aptly enough, contested by the Army Men, SKA and CSKA, and it produced some classic encounters. Game 1 ended with the Muscovites celebrating a cheeky 5-4 overtime win at SKA's Ice Palace, but after leveling the series, Oleg Znarok's men took revenge with a resounding 5-2 win at CSKA's Moscow home. Igor Nikitin's men hit back, tied the series, and then it was Lars Johansson's turn to produce goaltending heroics, keeping SKA off the scoreboard in Game 5 to allow Kirill Kaprizov to score the crucial goal and leave the Muscovites just one victory away from the Gagarin Cup final. That success duly arrived in Game 6, thanks to Mikhail Grigorenko's killer overtime goal, and SKA's defense of its crown was over. 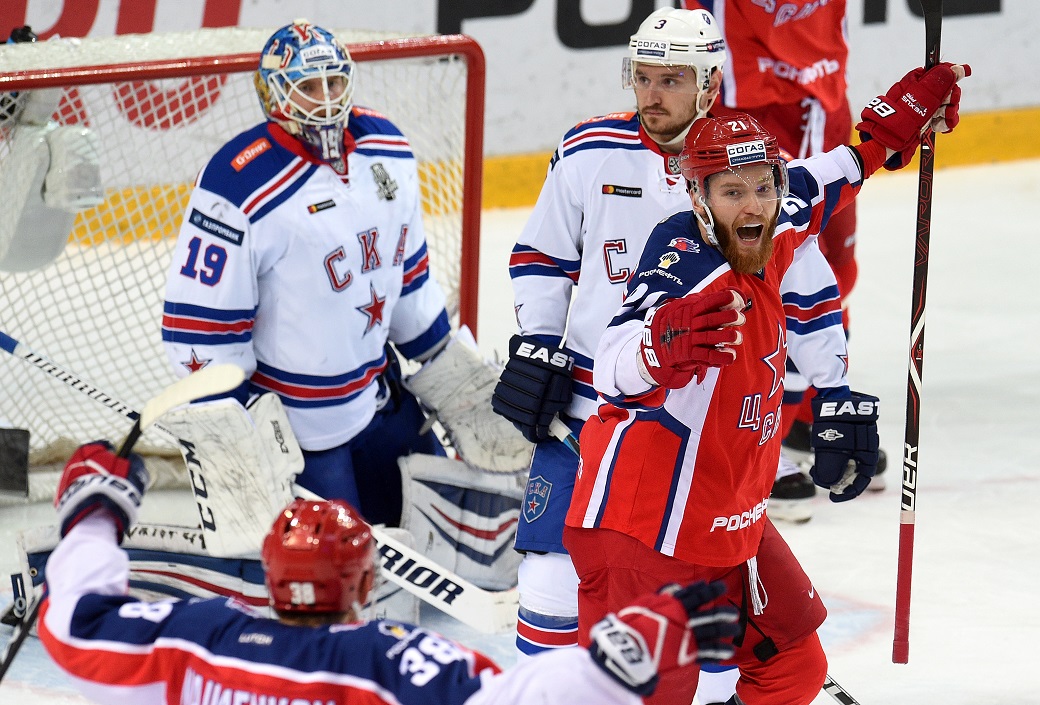 This was the second season in which Oleg Znarok combined the role of SKA head coach with that of Russian national team boss, and he has now added an Olympic gold to his honors list, one which already includes three Gagarin Cups. The experienced specialist should also be congratulated for putting together such a talented, entertaining, and winning team at SKA, even if this season he had to watch as Zinetula Bilyaletdinov led Ak Bars to glory and joined Znarok as a three-time KHL champion. His workload next season will be a little lighter now that Ilya Vorobyov has taken the national team's reins while Oleg has accepted a role as consultant. 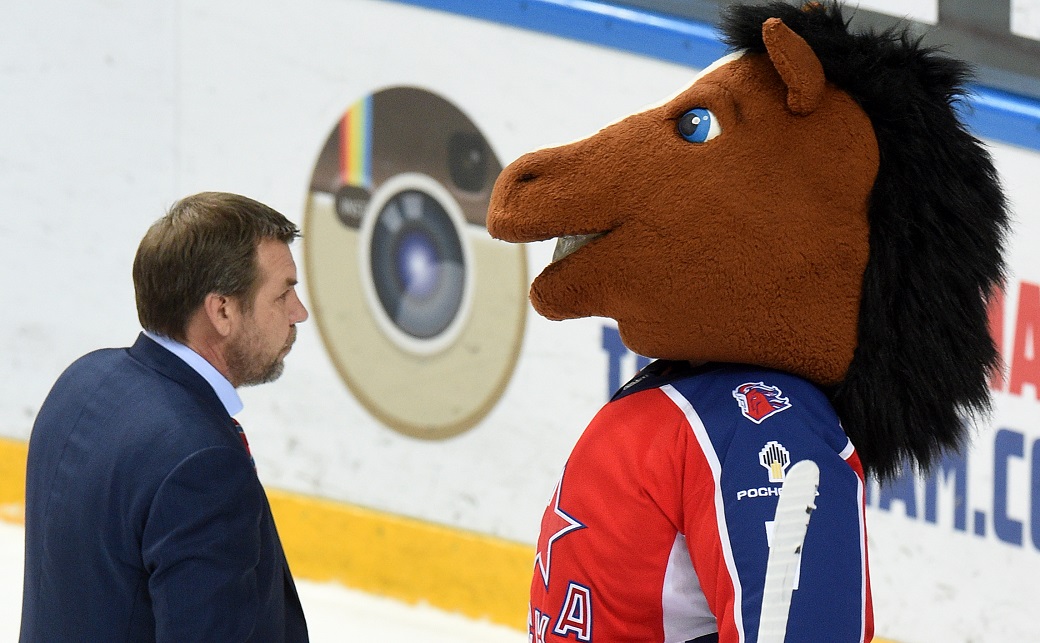 In a season of so many victories, it is a tough task to find the best, but one of the most resounding wins came in that classic Western Conference final against fierce rival CSKA. On March 2, Game 3 of the series took place in Moscow, with the teams tied at 1-1 following the two opening skirmishes in Petersburg. After Patrick Thoresen's 17th-minute strike gave the visitors the lead, Kirill Petrov leveled the score within two minutes, but this proved to be a false dawn for the home side when Jarno Koskiranta restored SKA's lead a mere 68 seconds later.

The second period began as the first had ended, with the Muscovites floored by a left-right combination from the visitors. A 22nd-minute goal by Patrik Hersley made it 3-1, and two-and-a-half minutes later Nikita Gusev added a fourth to send Ilya Sorokin to the bench. Just after the halfway mark, a Mikhail Grigorenko's goal gave CSKA hope, but a late empty-netter from Alexander Barabanov sealed a thrilling 5-2 triumph. If Barabanov had the last word, then the hosts had the last laugh – the next three games went to CSKA, and took the Muscovites into the Gagarin Cup final.

On December 29, SKA played in Minsk, and going into the first interval with a 1-0 lead thanks to a third-minute strike by Yegor Yakovlev, the Petersburg Men could be forgiven for assuming this was to be a routine victory over modest opposition, and possibly the fans' thoughts had already turned to last-minute New Year presents. However, Dinamo had clearly not read the script. They began the second period with a blitz of three goals in 58 seconds(!), with Marc-Andre Gragnani, Jack Skille and Evgeny Kovyrshin inflicting the damage. With his team apparently reeling, Oleg Znarok called a timeout.

It did not help. A little over two minutes later, Justin Fontain hit a short-handed goal to make it 4-1, and an unlikely victory started to look very likely indeed. Sergei Shirokov gave SKA some hope before the second intermission, and the spectators braced themselves for a probable third-period onslaught from the visitor. When that did not happen, the coach decided to pull Mikko Koskinen, but Dinamo responded by scoring twice into the unguarded net – Alexander Pavlovich and Quinton Howden the scorers – before a last-minute face-saving goal from Sergei Plotnikov made it 6-3 to the men from Minsk.

Since making his debut, at the tender age of 18, for Lokomotiv in September of 2014, defenseman Vladislav Gavrikov's star has risen steadily. Already by 2015 he had attracted enough attention to merit a call-up to the national team, thanks to a certain Oleg Znarok, and so it was logical that last year Gavrikov would move to SKA. His account for the tenth KHL Championship reads 14 (5+9) points and an efficiency rating of +21, the second highest among the defensemen, and surpassed only by fellow new arrival David Rundblad. Of course, the proudest moment of Gavrikov's season came in February, when he helped Russia to claim Olympic gold in Pyongchang. 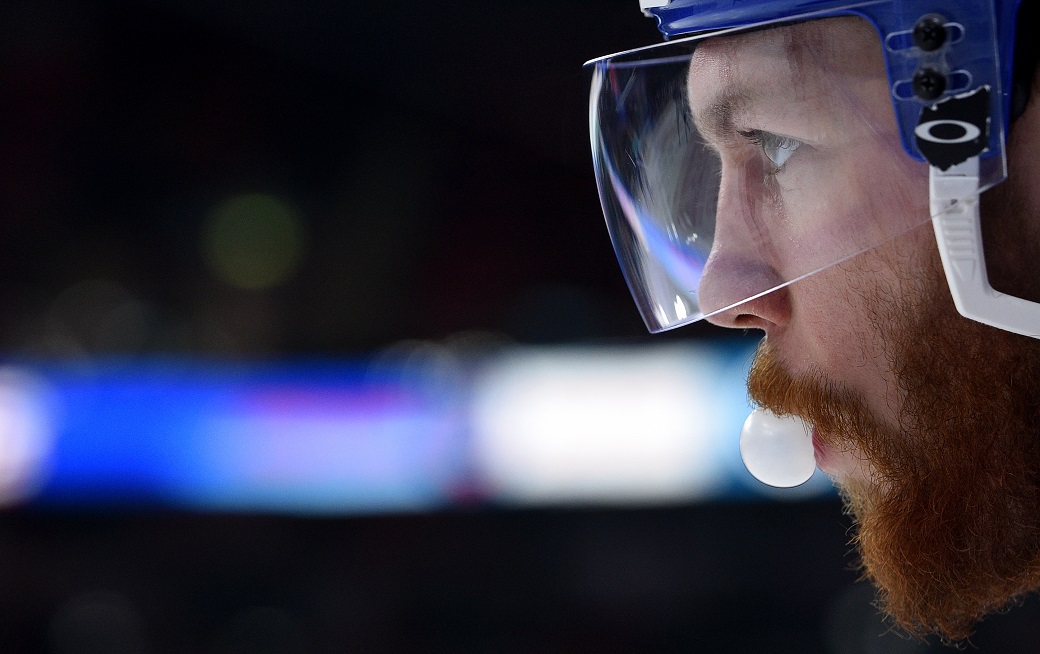 It is fair to say that none of the team deserves such a label. Vadim Shipachyov has every right to be disappointed with his NHL adventure, and on his return he did not receive the ice time he might have desired, but a haul of 25 points from 22 games, including 3 game-winning goals, shows he is as ruthless as ever. Maxim Karpov did not exactly set the world on fire, but he still performed admirably, and moreover, hardly anyone expected him to be given as much playing time with SKA as he had enjoyed in his days with Dynamo.