The annual KHL Closing Ceremony took place Wednesday at Barvikha Luxury Village, near Moscow. As usual, it was a time to celebrate the highlights of the past season and reward the biggest heroes of the tournament for their efforts.

SKA forward Nikita Gusev picked up three prizes on the night: he received a Golden Helmet as one of the six top players for the symbolic ‘team of the year’, was voted ‘Gentleman on Ice’ among forwards for his success and conduct throughout the season and added a Golden Stick as regular season MVP. He had a big contribution to SKA’s goal-grabbing season, helping the team finish as top scorers with 270 goals, and also contributed to many of Ilya Kovalchuk’s 63 points as he won the top scorer award. SKA’s success wasn’t done: Pavel Datsyuk won the services to hockey award. 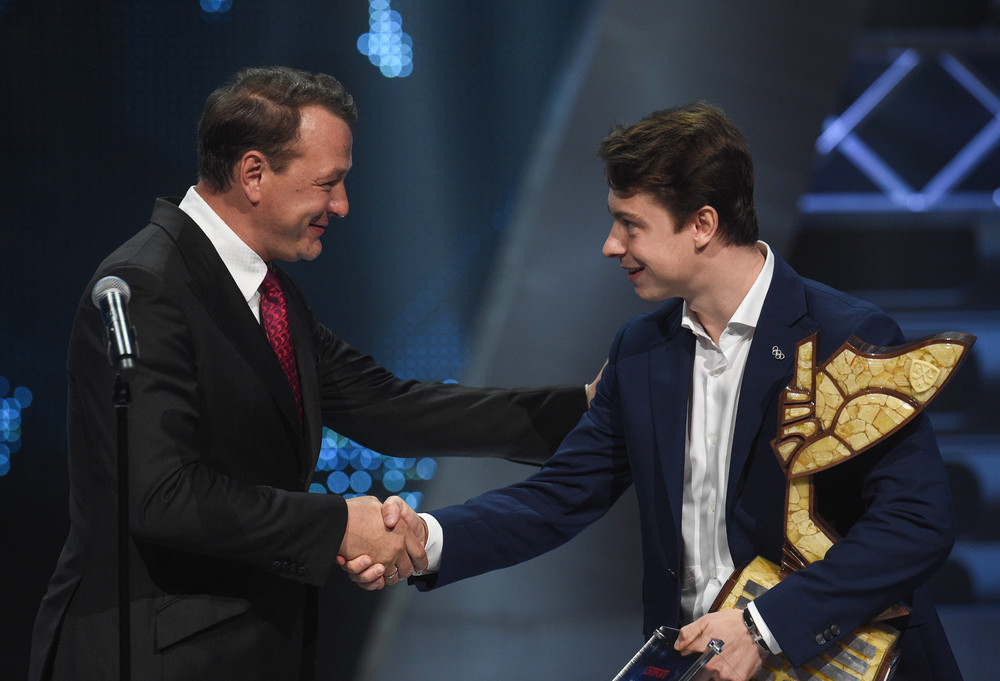 Ak Bars was among the prizes as well. The Gagarin Cup winner saw Zinetula Bilyaletdinov collect the top coach prize while Justin Azevedo won a Golden Helmet and was named playoff MVP. The Kazan club also collected a host of awards off the ice for the quality of its management and medical services. 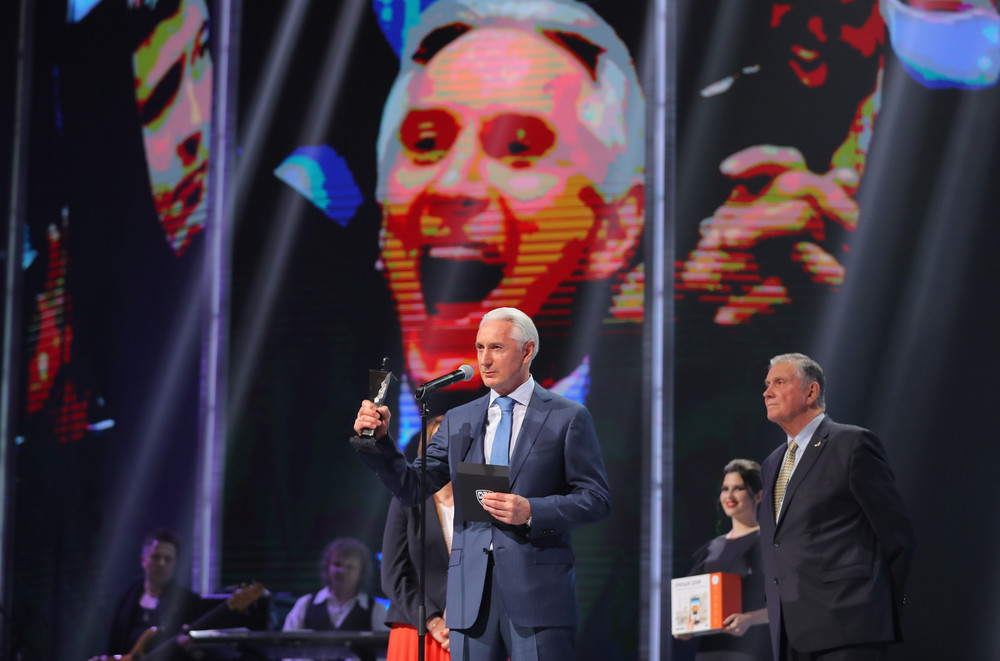 Salavat Yulaev’s season didn’t always go smoothly, but the Ufa organization also had success to cheer. Danish D-man Philip Larsen was the most prolific blue-liner of the season with 38 (11+27) points, while the Nordic combination of Linus Omark, Joonas Kemppainen and Teemu Hartikainen was the highest-scoring line with 42 goals between them. Also in Ufa, Olga Sosina was chosen as the finest player in the Women’s Hockey League for her season with Adigel. 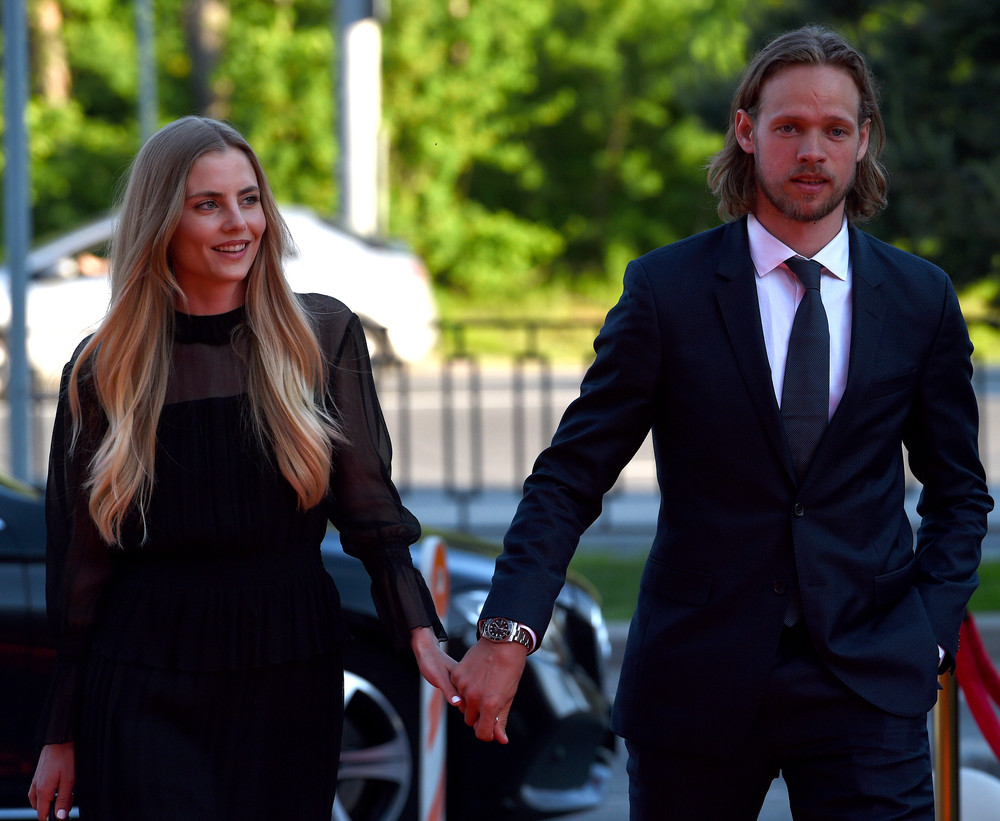 You’ve heard of the Triple Gold Club, the elite band of hockey players who have won Olympic and World Championship gold as well as lifting the Stanley Cup. This season brings us the first member of the Quadruple Gold Club. SKA’s Pavel Datsyuk has won those three awards, plus the Gagarin Cup – the only player ever to do so. In recognition of this unique achievement, Pavel was presented with the Syrius Prize. 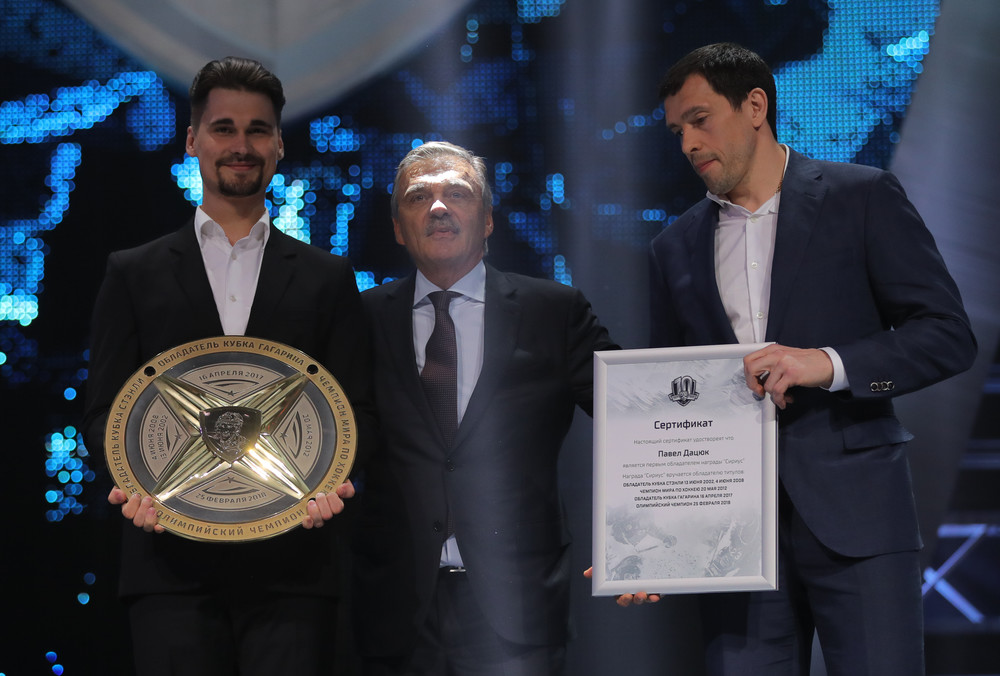 Salavat Yulaev’s Scandinavians were not the only imports to pick up awards. There was Azevedo’s success in Kazan and a first-ever prize for Nigel Dawes. The long-serving Barys forward was the KHL’s top goalscorer last season with 35, and is looking forward to joining Avtomobilist next season.

“It’s a real honor to be part of this 10th anniversary event,” he said. “This is my first award, so I guess I need to keep working! I got the chance to chat with [Avtomobilist defenseman] Nikita Tryamkin this evening and it’ll be good to get to know the rest of my new team-mates. Avtomobilist is trying to put together one of the strongest teams in the KHL and I’m interested in being part of a team that is trying to grow.” 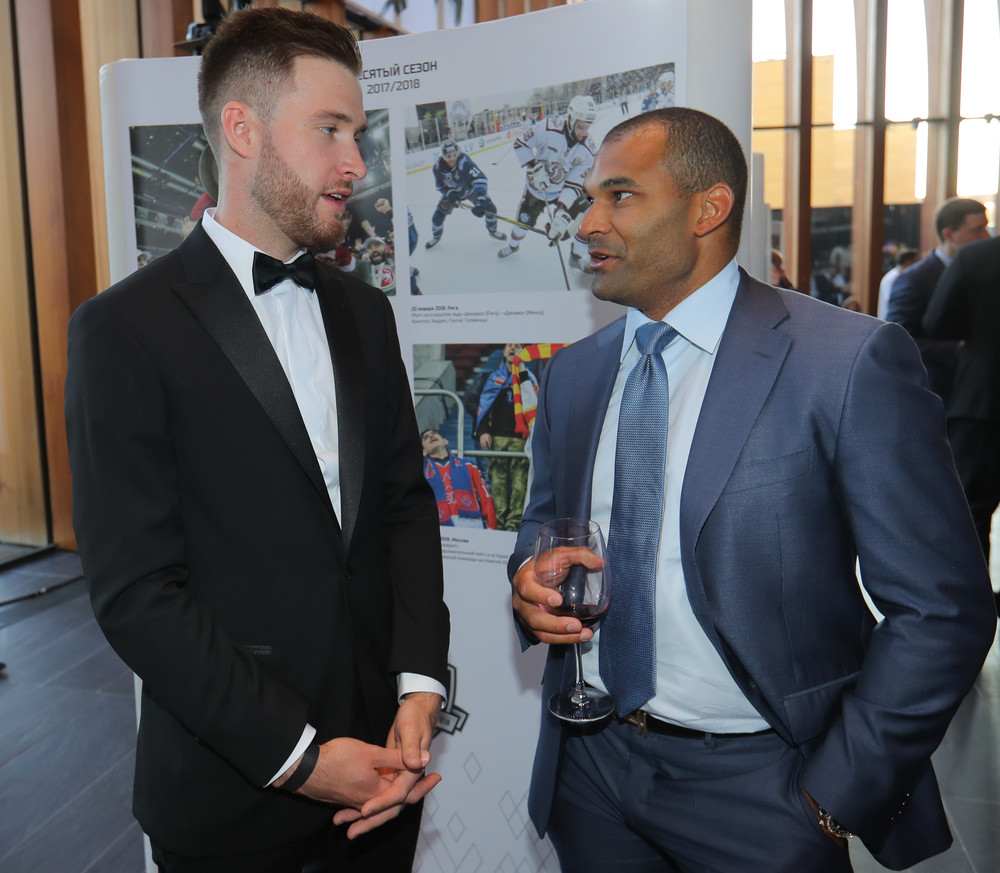 Oleg Znarok, a formidable presence behind the bench for MVD, Dynamo Moscow, SKA and team Russia, is well known in KHL circles. But this show brought his younger brother, Igor Znarok, to the forefront. As a coach working with junior teams in the Traktor organization, Igor was the first man to nurture the talent of Vitaly Kravtsov, winner of the Cherepanov award for Rookie of the Year.

“I’m delighted that Vitaly has won this award and I’m honored to appear on stage with him,” said Znarok. “He fully deserves it and I’m sure there is more to come. Vitaly sets himself the highest standards and has the character to achieve them.”

Kravtsov, meanwhile, remains close to his first coach. “We often have a chat and he still has lots of advice for me, but it was a pleasant surprise to see him here tonight,” the young forward said. “I owe him a debt of gratitude, he raised me into the player I’m becoming.” 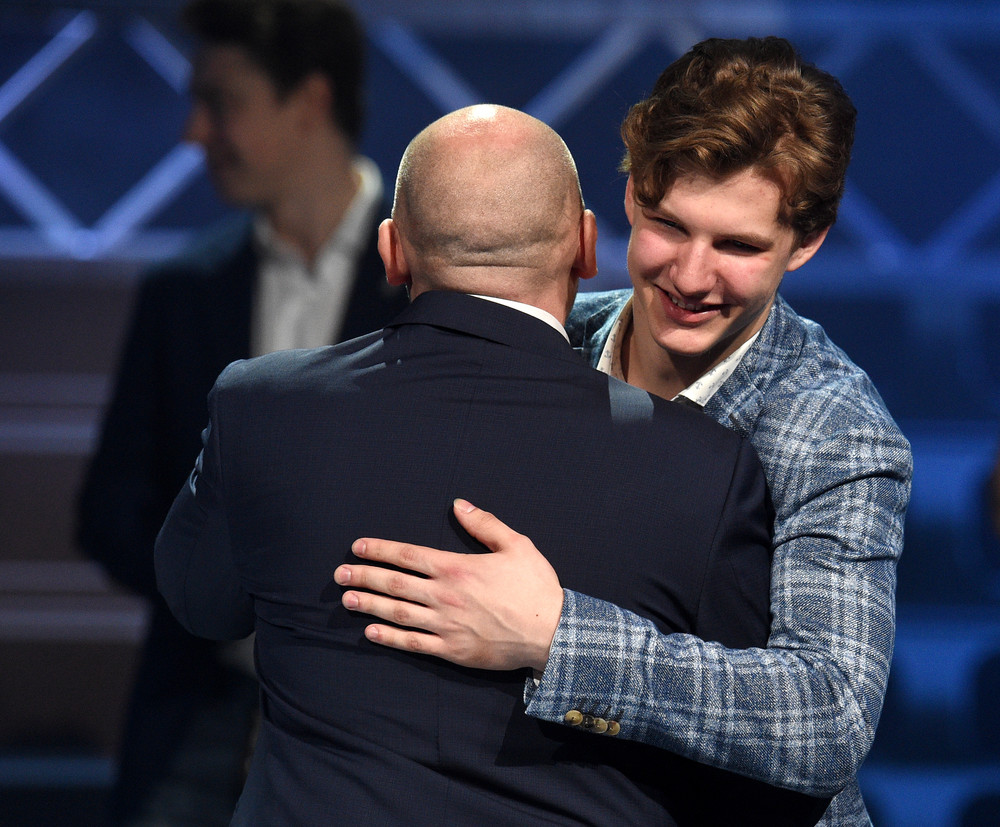 Where it all began …

Znarok was not the only coach to join his protege at the ceremony. In recognition of the vital role played by the unsung heroes of youth hockey teams all over the world, four others took part in the festivities: Gennady Kudrin (Nikita Gusev’s first coach), Alexander Kovalevsky (Konstantin Barulin), Alexander Mikolenko (Bogdan Kiselevich) and Sergei Demenyshin (Nikita Tryamkin). And so, the 10thanniversary KHL season came to its official end looking back to where we have come from as well as facing forwards to an exciting future. 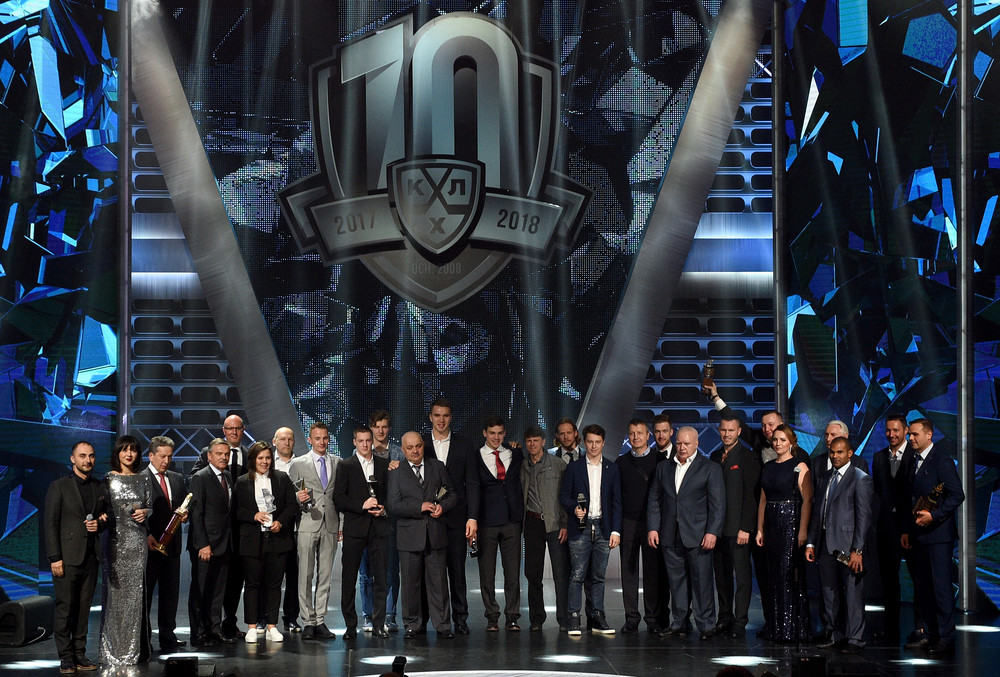