On the way to Vienna. Bernd Brückler

This October, the KHL will come to Vienna for the first time. One month before our first ever face-off on Austrian ice, KHL.ru talked to Bernd Brückler, the first Austrian goalie in the history of the league.

On October 26 and 28, Slovan will play at Vienna’s Erste Bank Arena against two Russian teams, CSKA and SKA. With a month to go, about half the tickets have already been sold for the KHL World Games’ visit to the Austrian capital. 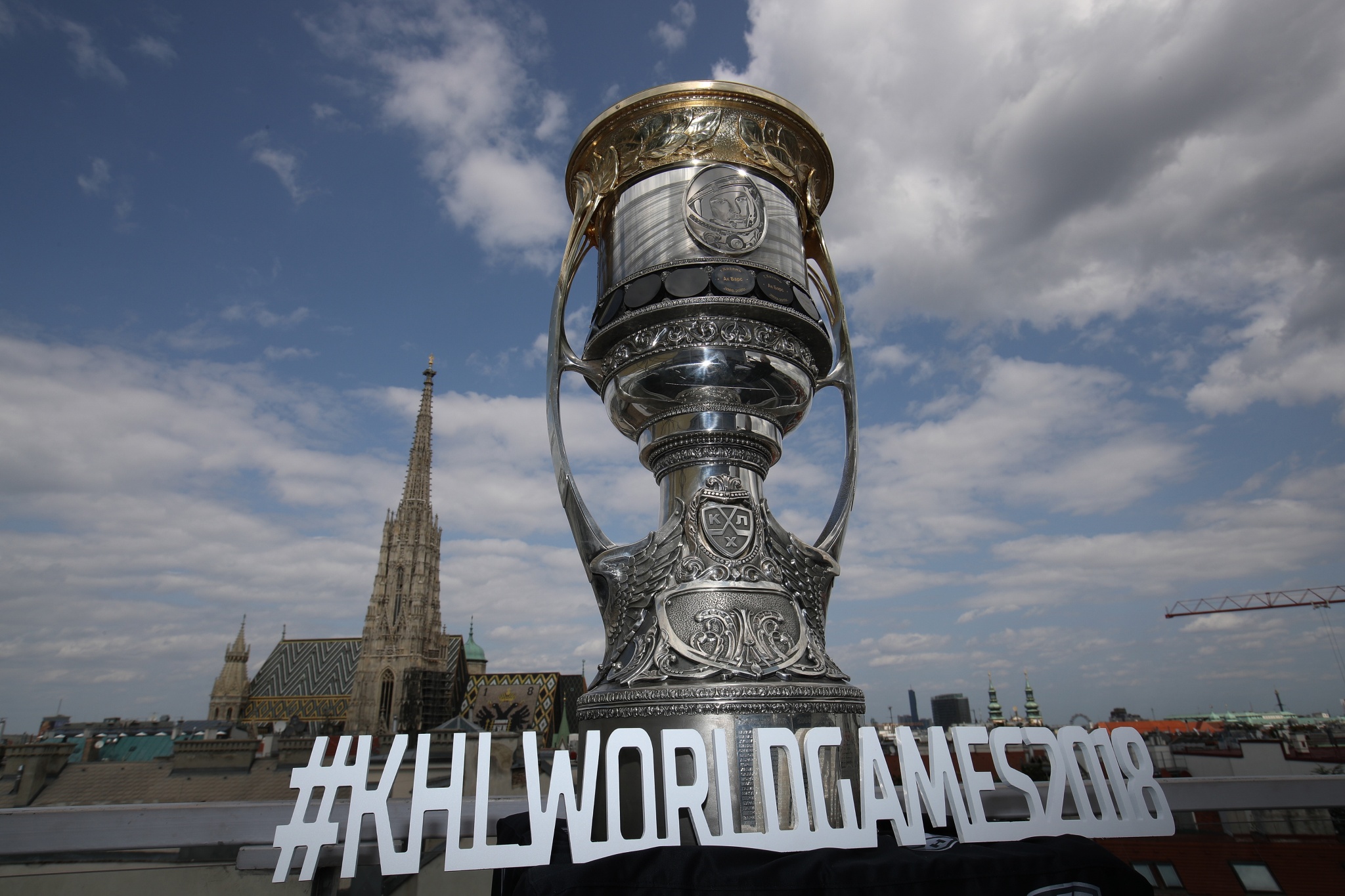 “I’m not gonna lie; I’m excited about these games. Unfortunately, I can only get to the second game of this event. The KHL is getting more and more popular, and it is a nice to see the league paying attention to Austria. People in Vienna have a chance to see quality good hockey and they should enjoy it. The KHL brand is going to Central Europe,” said Brückler.

The goalie is one of just two Austrians to feature in the first decade of KHL action. The first was defenseman Andre Lakos, who was at Traktor Chelyabinsk, the second was Brückler himself. The goalie’s last KHL game was on Feb. 24, 2012. Since then, there have been no more Austrian players, although we should mention that Austrian-born Slovak Marko Dano battled for Slovan from 2012-2014.

“Most of our national team players stayed home and played in the EBEL, there are few in Scandinavia. Probably, some of the players could make a step up, but again they are now exactly where they should be. Our hockey is still growing; we are trying to make our national league better. The national team has been up and down at every World Championship, but this season they stayed in the elite pool.” 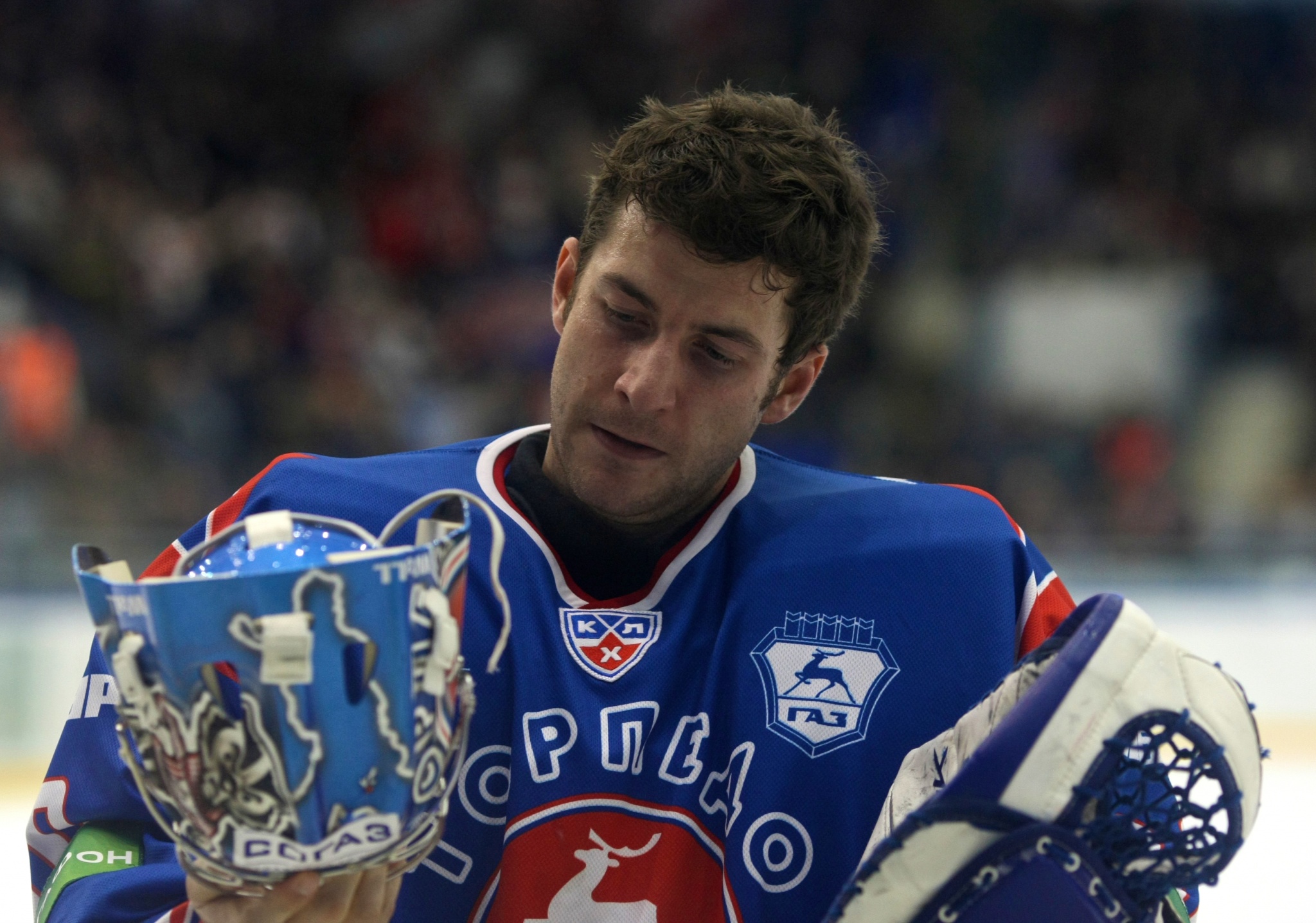 It was excellent life experience

Brückler started his career at his hometown club in Graz and then spent time at the University of Wisconsin playing alongside Joe Pavelski. Back in Europe, he played three seasons for Finland’s Espoo Blues in 2006-2009 before taking the chance to go to Russia.

“I was playing Finland, looking for some offers from Russia. I knew that KHL was growing and it was a high-quality league. So it was a great opportunity for me. I spoke with Andre Lakos, the first Austrian player in the league, but mostly with the guys on my Finnish team. At Espoo, I played with Mikko Koskinen who had a great career in KHL and then moved to North America. For me it was clear that he is very talented goaltender, but also had incredible mental strength. He was so good! He has the right attitude if he allows a goal, for him it does not matter was it good or bad-luck goal.”

“I cherish my time in Russia,” he added. “It was three seasons, I started a fourth, but then they let me go. I’ll never forget this time. I played with so many talented guys, but I should mention one. Try to guess!

“Of course, it is Vladimir Tarasenko. He was a friend of mine that time. I always knew that he would be a special player. It wasn’t just about his skills, but the hard work. He has a really good attitude to his game. My time in Russia was an excellent life experience – and not just about hockey. I was part of some good organizations, they treated me extremely well”. 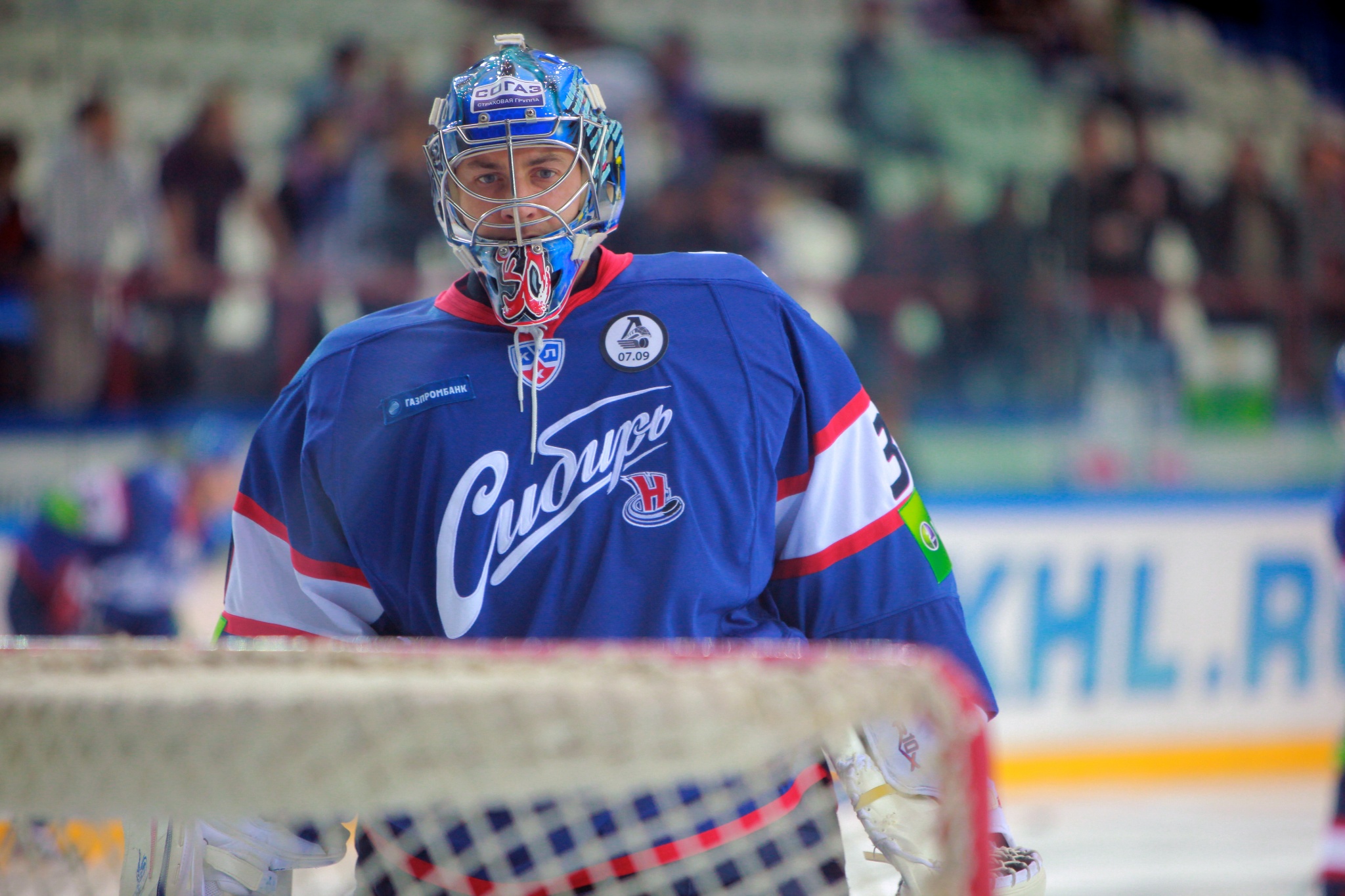 Brückler retired at 34 after playing the 2015-16 season in the EBEL with with Klagenfurter AC. But he’s still active in hockey, working as an agent and doing some TV. His former goaltending colleague Alexander Fomichyov also works an expert at KHL TV.

“I have a family, three young kids. We needed to be in one place and I was journeyman for many years, so it was a time to settle. Working as a TV expert at games and a hockey agent go together nicely. I still get around the rinks, mostly I have players in Central Europe, no one in the KHL yet.

“I used to be involved in stock trading, I follow the markets, I am interested in it, but I’m still much more passionate about hockey. I am not surprised that Alex became a pundit too. He is a smart person, well spoken; I knew that he would have bright future after hockey”.

“A record? Most assists! It is a strange record, but I’ll take it! Somebody will break it, records are always broken. Anyway, I do not consider it as a goalie record”. 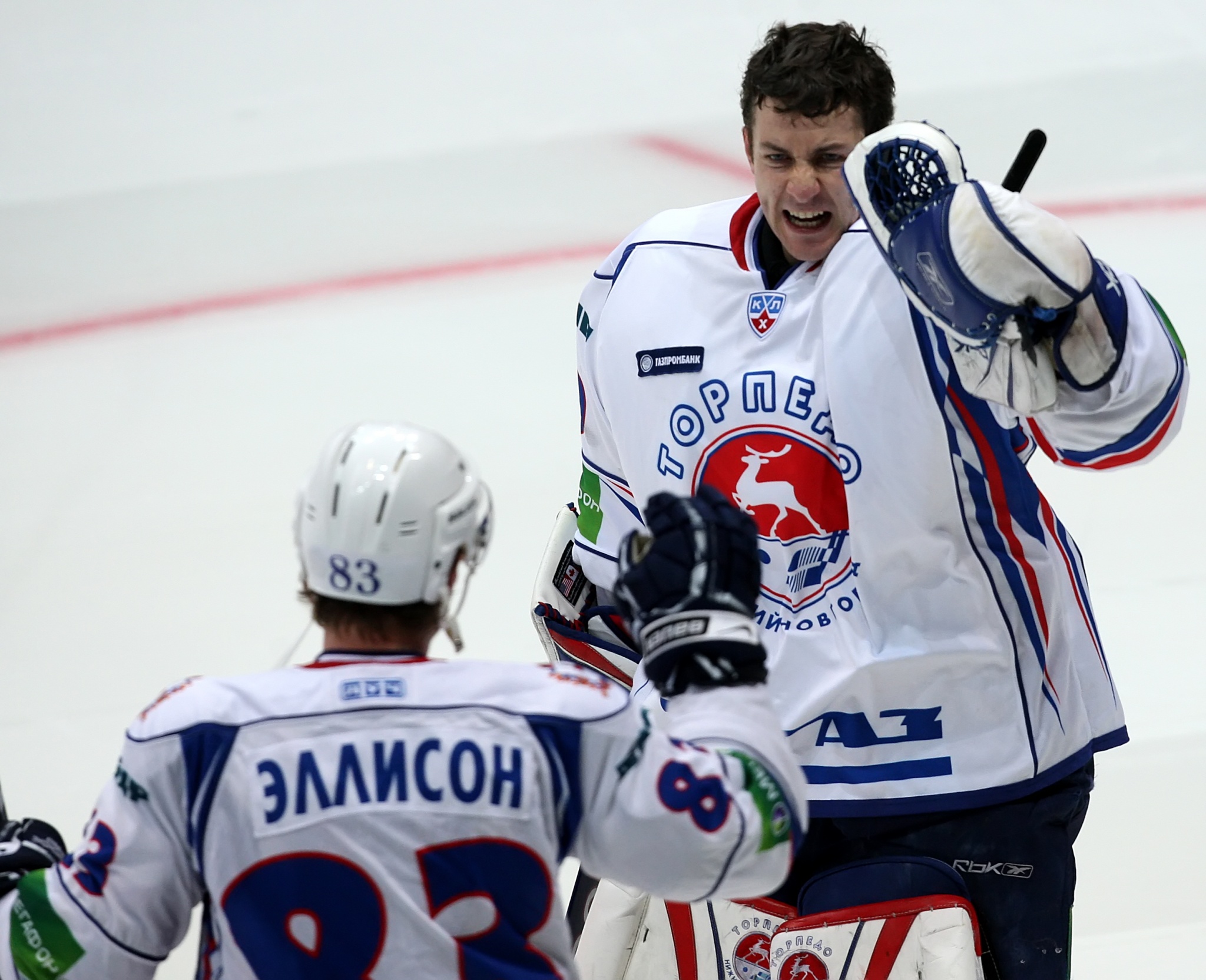 After his career in the KHL Bernd Bruckler wrote a book ‘This is Russia’. It’s been translated into several languages, but not yet into Russian.

“I still want to publish it in Russian; it’s not about making money, it’s just for hockey fans. Maybe I would write one more book, but it would be not about Russia, it is a closed story.

“When I was in the KHL I had a blog in one of the newspapers. It was kind of a diary of my first year at Torpedo. Everybody seemed to like it, it was a Western player talking quite positively about his experiences here and enjoying Russian culture. Then we had the tragedy with Lokomotiv and I realized that I could write a book about my experiences in Russia.

“I think that in the West it was seen as positive feedback, but in Russia maybe some people though it was better for me to keep my mouth shut, take the money and go away. But that’s life, it’s not always wine and roses.

“About the ‘baza’, [the training camps at some Russian clubs where players would live away from family and friends], that was a strange experience. My wife was pregnant, and I couldn’t go and see her. I just stared at those white walls. That’s it. I can’t say anything more, it’s just my experience. I don’t know what it was like for Vladislav Tretyak, how he felt about it. It’s just my experience.

“Overall, I am very happy with my career. I was able to play abroad, I got a university degree and I spent some time in Finland and in Russia. I’ve had a good career in hockey, and it’s still going.” 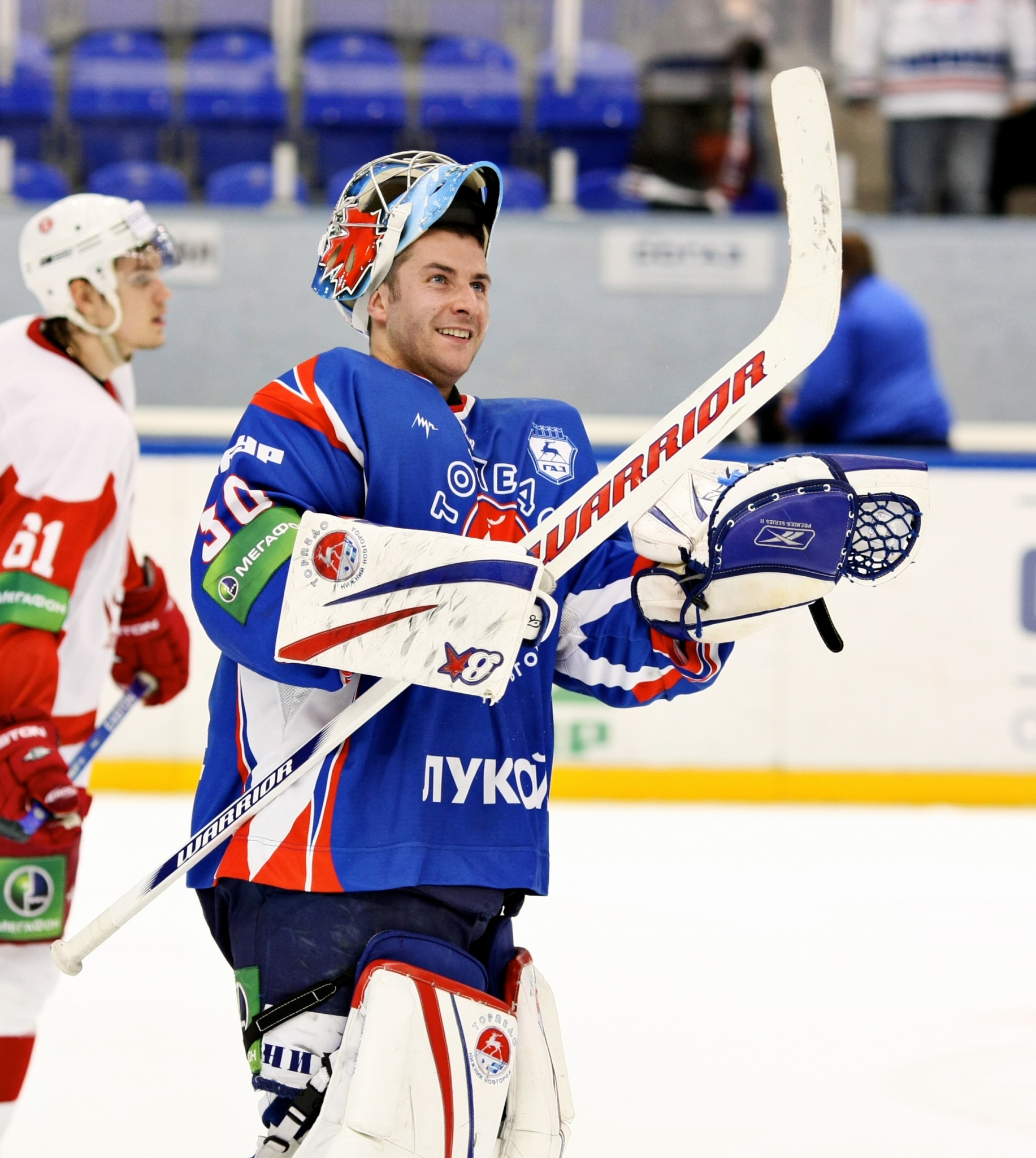