Torpedo signs off with a win

Torpedo finished its mini-tour of Great Britain with a 5-2 victory over Team GB in Sheffield, with Anton Shenfeld leading the way. Shenfeld scored twice and his line was constant problem for a home team that struggled to live with the speed and skills conjured up by the KHL club.

Britain got off to a perfect start: Mark Richardson put his team in front after just 17 seconds and might have extended that lead when Robert Farmer – Saturday’s hat-trick hero – got through on Nikolai Molkov in the Torpedo net. But Shenfeld brought Torpedo level late in the frame, capitalizing on good work from Mikhail Varnakov down the left channels to go five-hole on Jackson Whistle, Britain’s understudy goalie.

In the second period, Torpedo took control with three unanswered goals as Britain ran into penalty trouble. Early in the frame, Viktor Shakhvorostov put the visitor in front off a Pavel Makarenko feed before Daniil Ilyin set up Yegor Ogiyenko for a shot that looped into the net off the goalie’s helmet. Shenfeld’s second came on the power play with Varnakov once again involved in another slick passing combination.

For many in the home crowd, it was turning into a disappointing send-off for the team. However, the excitement on the faces of the children in Sheffield Arena as the hits thudded into the boards and the game picked up speed highlighted the lasting value of these exhibition games. Irrespective of the results, it gives a chance for more hockey fans across Europe to experience the quality of the KHL at first hand.

The final period saw GB produce a more competitive game. Kirill Urakov added a fifth for Torpedo but the last hurrah went to the host after local hero Ben O’Connor fired in a point shot that was tipped past Molnov by Brett Perlini. 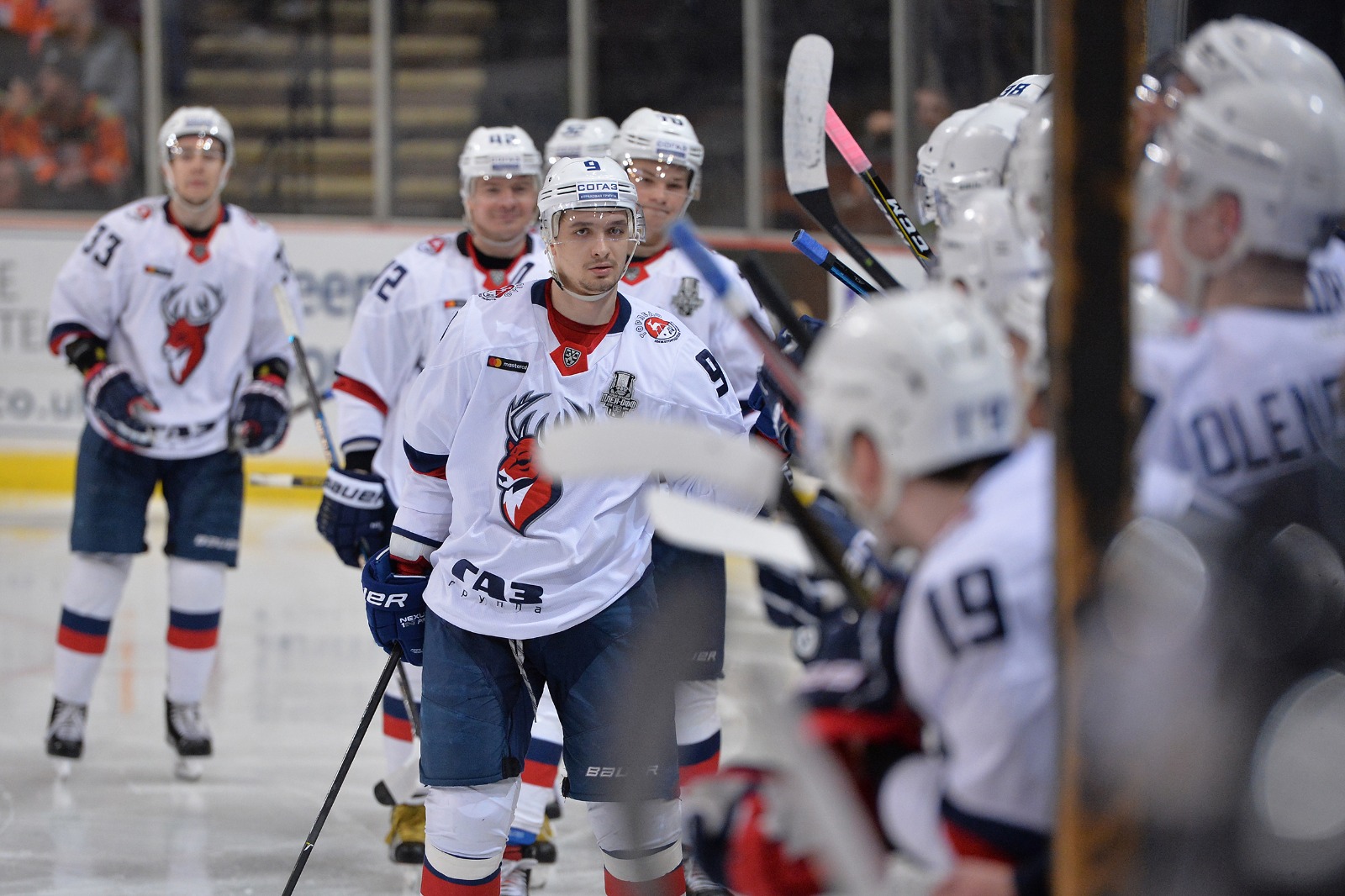 We just approached things a bit differently because we wanted to make sure we finished our season with a win. Today we played more of the kind of hockey we’d like to see during the season. Both games were a good opportunity for our younger players, who didn’t get much ice time, to show what they could do.

This was my first time in England, it was an interesting experience to see how our guys played and to get a look at their national team. You don’t always get chances like this. Before yesterday’s practice it was good to see how many kids were training, playing the game. And the atmosphere was good in the game. It was great to see Russian flags in the arena and the British fans got behind their team well.

We really liked the games. We got a chance to look at our depth, our leading reserves. I’m happy with the outcome. Of course we wanted to win both but from a professional point of view it was important to get a look at our reserves. We really enjoyed the whole trip, thanks to the KHL for giving us this opportunity.

We weren’t ourselves tonight. The first period we played OK, we got a great start and in the third period we were OK but in the second period we were really poor and we gave up three of four goals. Against good teams we can’t afford to do that. We can’t switch off in periods. We did it last night at times but our offense was a bit better. We’re going to need to be switched on for the whole 60 minutes when we get to Slovakia.

These games certainly let us know that we can’t just show up and win hockey games. We knew that, but sometimes it’s nice to have it reinforced. We need to buy into our systems, work hard every night and try and get a result.

What did you get out of playing against KHL teams this season?

We beat Riga, we beat these guys last night. It would have been good to follow that up with another win but maybe that’s a good lesson for us. We’re a good hockey team but we have to be switched on at all times.

These kind of games don’t happen very often. Our national team needs this kind of exposure, these tests. We’re playing Canada, the USA, Finland, Germany, who won a silver medal at the Olympics. We’re up against the best in the world and we need good opposition like Torpedo tonight to help us prepare for that.