KHL.ru explains the changes in the ranking parameters for the season just ended.

The 2018/19 ratings represent an objective assessment of our clubs’ performance in all aspects of their hockey activities – sporting results, financial sustainability, and work with spectators to improve the game-day experience. 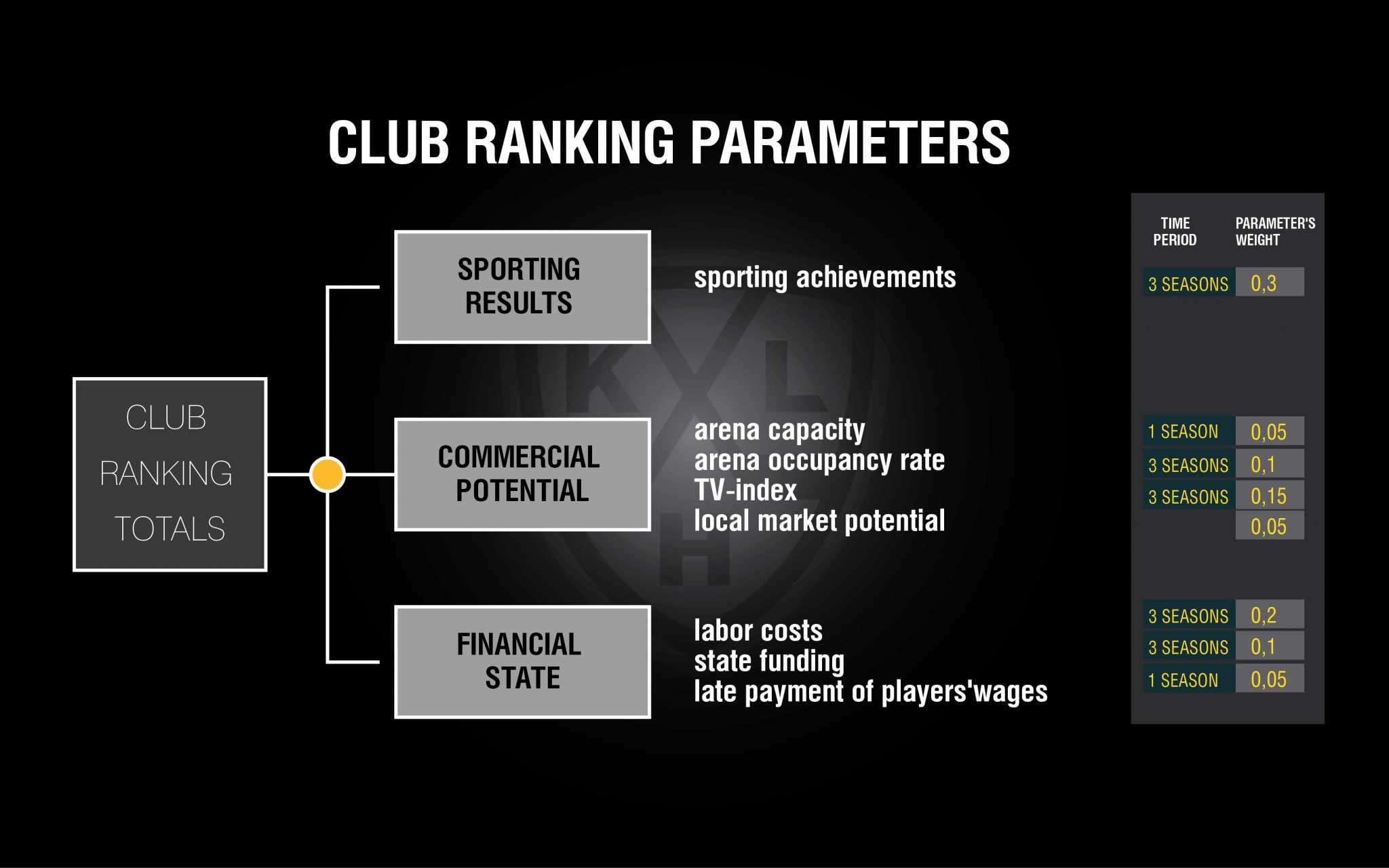 On May 28 at the meeting of club directors, the results for the 2018/19 season were presented (see table 1) 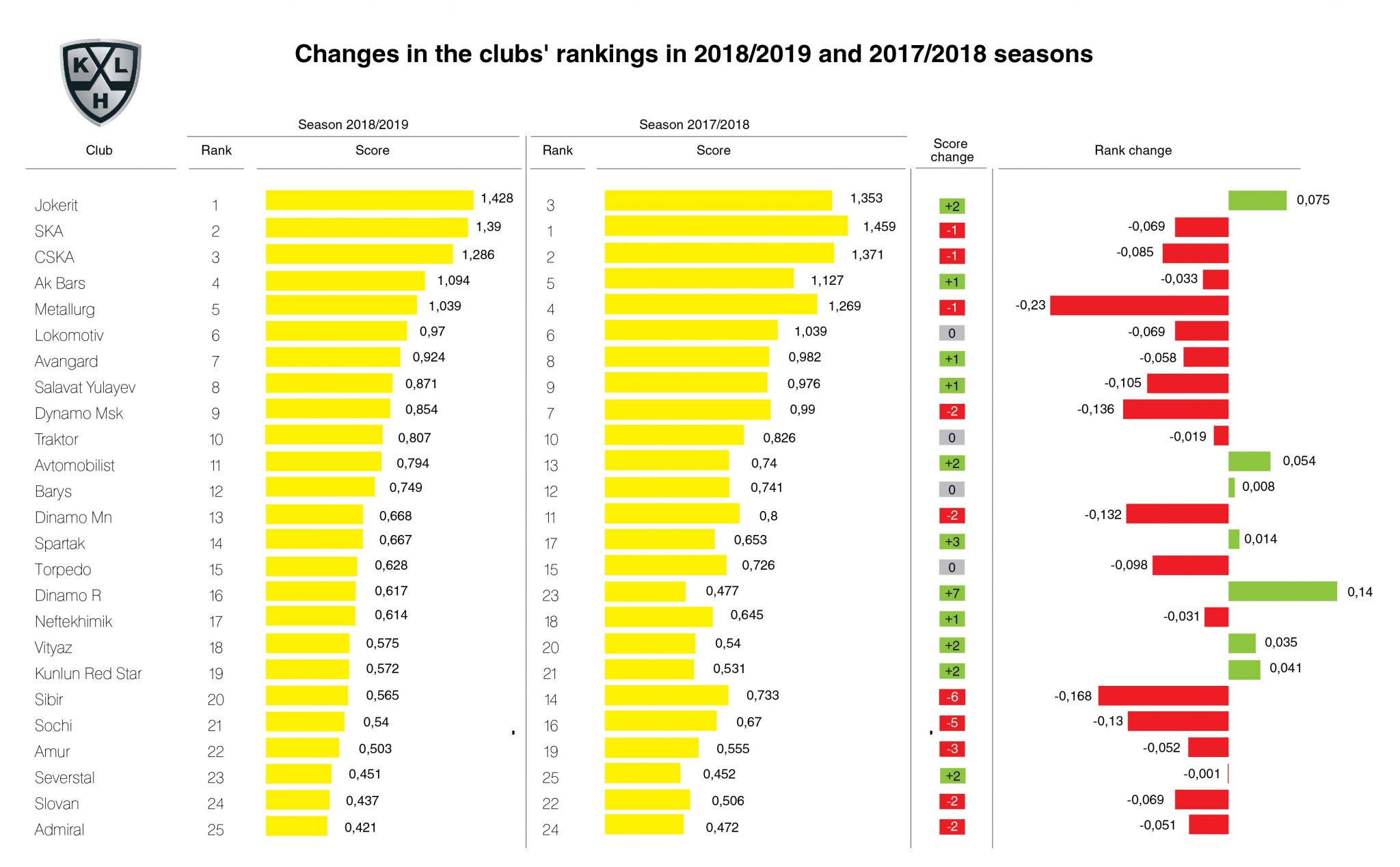 The clubs’ scores are assessed twice a season and any change in each of the eight parameters impacts upon the club’s overall rating. The leading club over the previous two seasons was SKA.

The section takes into account results from the past three seasons, so the current rating goes back to 2015/16. Compared with the previous season there was a change in the median point because in the 10th KHL season 27 teams took part but in the 11th there were 25.

The biggest drop under this parameter was suffered by Metallurg. In 2015/16 the club lifted the Gagarin Cup but last season it finished ninth overall. Other significant drops have affected Sibir (from 7th to 18th), Admiral 13th to 21st) and Slovan (15th to 25th)

Kunlun Red Star played its third KHL season, so the club continues to see growth in this area. Now KRS can gain points from a full three seasons, like all its rivals. In its first season of KHL action, the Chinese franchise reached the playoffs. 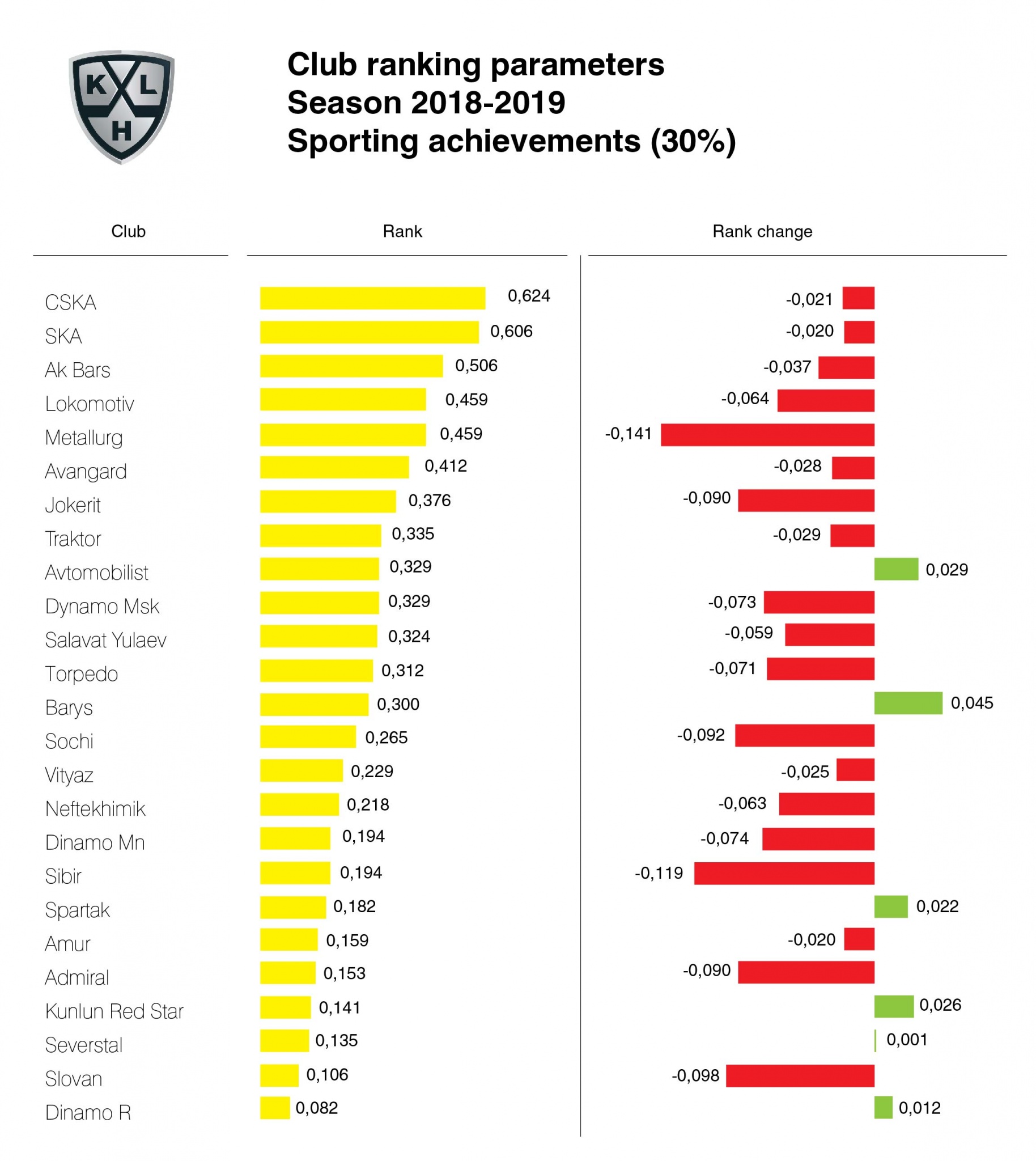 The ‘Sporting Results’ parameter is the biggest single factor in the overall rating. In 2018/19 just seven clubs (Severstal, Kunlun Red Star, Vityaz, Dinamo Riga, Spartak, Barys and Avtomobilist) improved their score in this area. The other teams all lost points. Apart from performances on the ice, this was also due to changes caused by the reduced number of teams.

There was a significant change in the way the TV Index is calculated. This is connected with a review of the contracts with international broadcasters and the decision of the Board of Directors to change the system of TV payments in favor of clubs that attract a larger TV audience. Previously, the TV payments were split 50-50; now the club local to the broadcaster purchasing the rights to the game receives 70% of that licensing fee.

The new methodology has led to improved performances for non-Russian clubs in this area. Jokerit, Dinamo Riga and Slovan have all seen significant improvements. The Finnish club topped this season’s rating, while Dinamo climbed seven places. 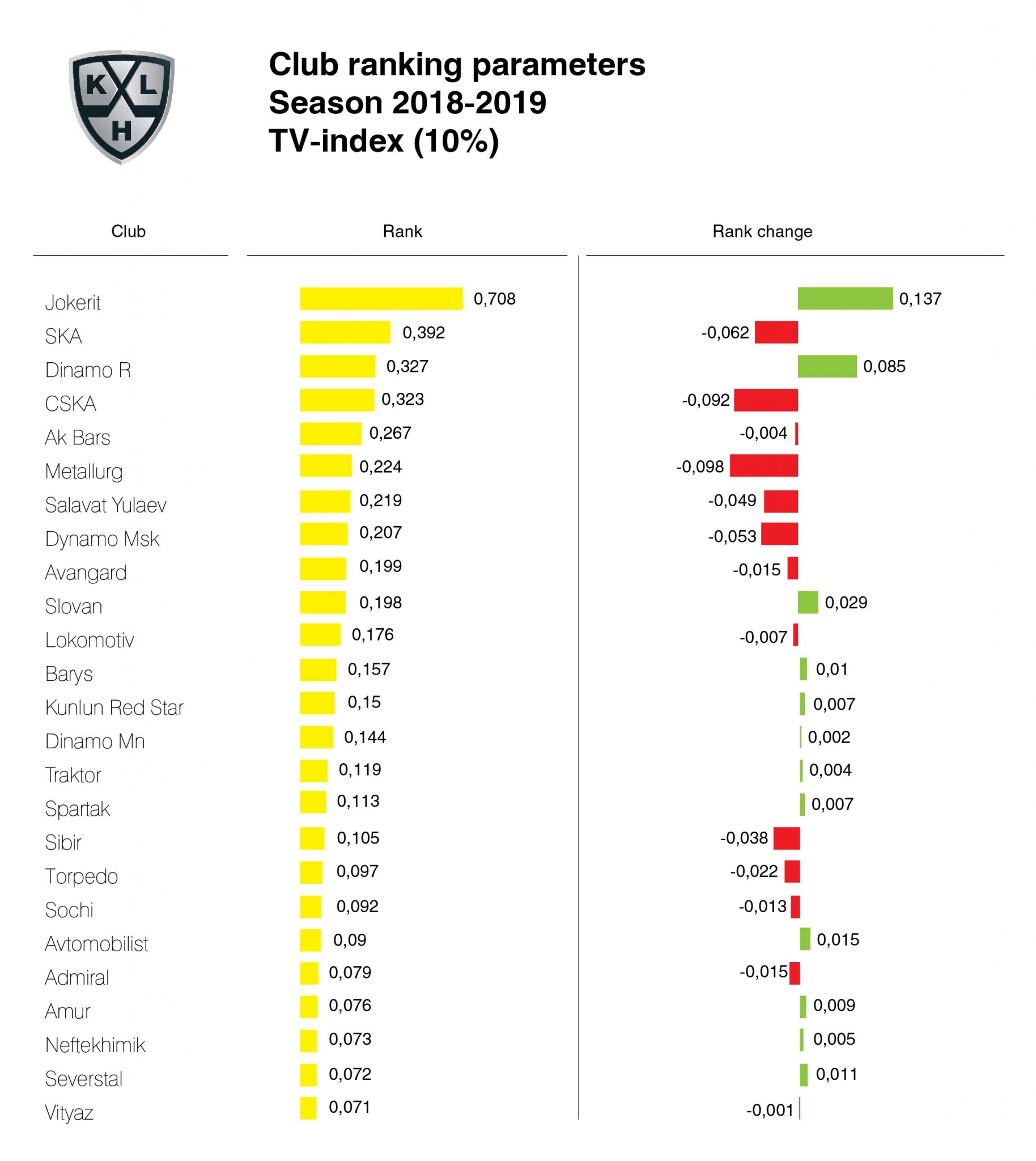 The TV Index accounts for 15% of the overall ranking, making it one of the parameters where changes in methodology can strongly influence the overall result. Three non-Russian clubs (Jokerit, Dinamo Riga and Slovan) saw significant growth in this area.

The current season saw a rise in the average attendance at KHL games. The 2018/19 campaign set a new attendance record of 6,603 fans on average. 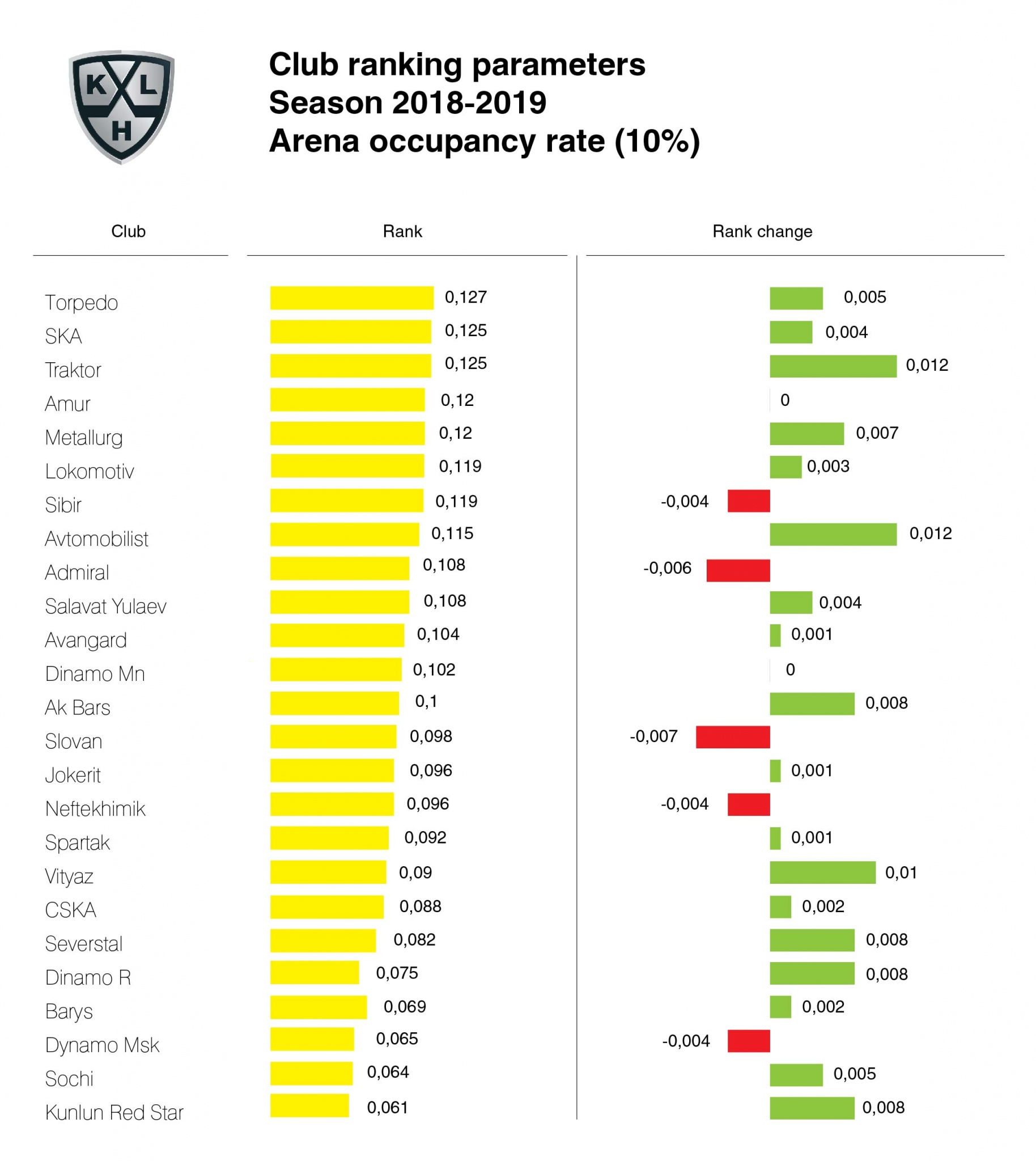 Filling the Arena (weighted at 10%) is an indication of the work of the club’s commercial team in attracting fans. Last season 18 clubs increased their attendances with the most significant improvements coming at Traktor and Avtomobilist. The following clubs saw a decline in this area: Admiral, Slovan, Sibir, Neftekhimik and Dynamo Moscow. Amur and Dinamo Minsk scored the same as in the previous season.

There were a few small changes in this parameter due to a large number of games played at alternative arenas. SKA played one game at the Gazprom Arena soccer stadium, Jokerit played some games in Tallinn while Spartak went to Mytishchi. Slovan and Dinamo Riga took part in the KHL World Games project, staging home games in Vienna and Zurich. CSKA moved to the CSKA Arena, Avangard played the whole season in Balashikha and Dinamo Minsk played a few games at the Chizhovka Arena. 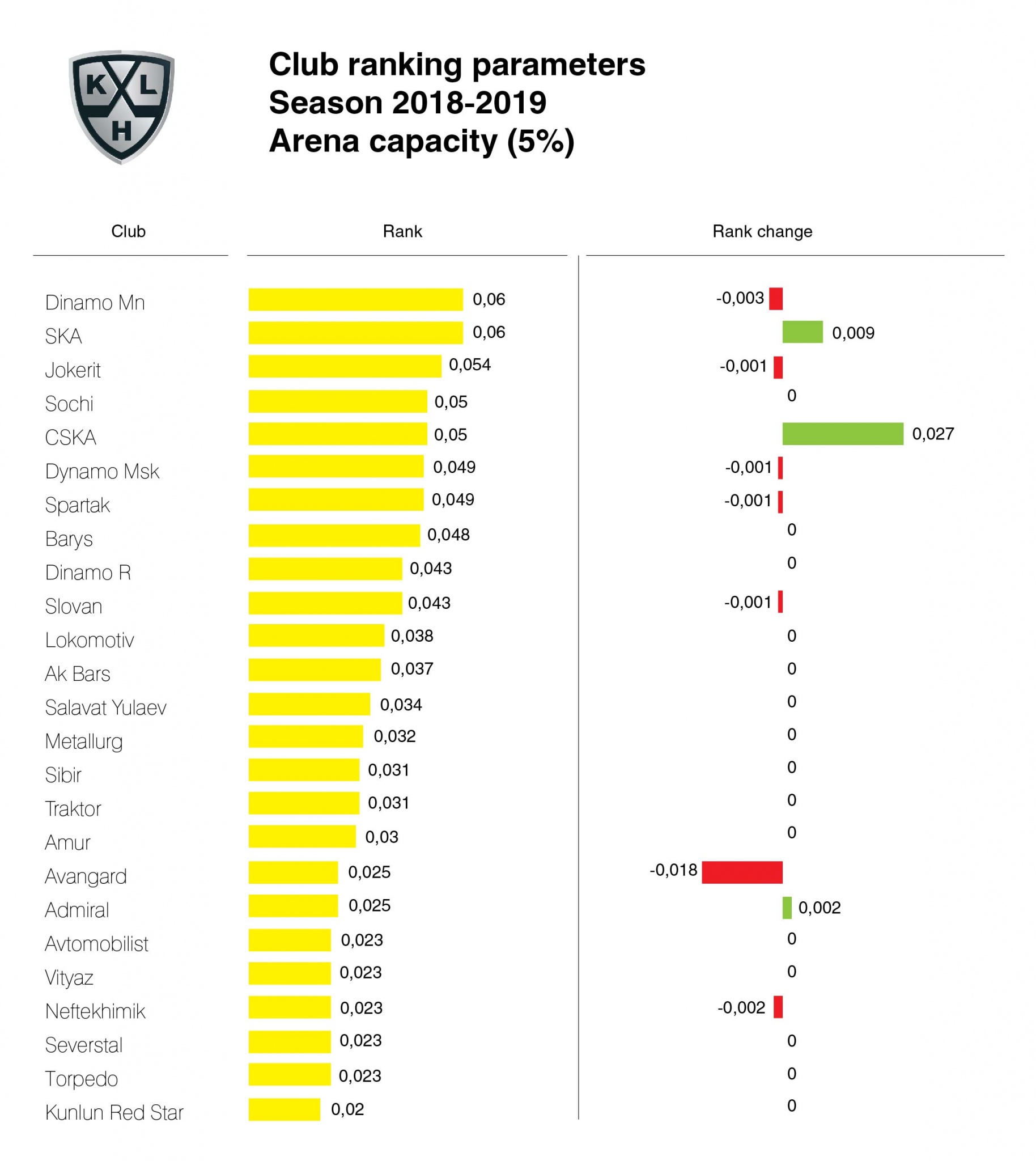 In this category the scores for every club remained the same. The leaders include Avtomobilist, Dinamo Minsk, SKA and the four clubs in and near Moscow – CSKA, Dynamo, Spartak and Vityaz. When calculating these figures, the rating does not only consider the population of the city and the proximity of rival KHL teams, it also factors in the populations of neighboring communities. The highest scores go to teams with a potential market of 2 million people. Next season Kunlun Red Star is set to play all its games in Beijing, so the club could potentially gain a top score in this parameter. 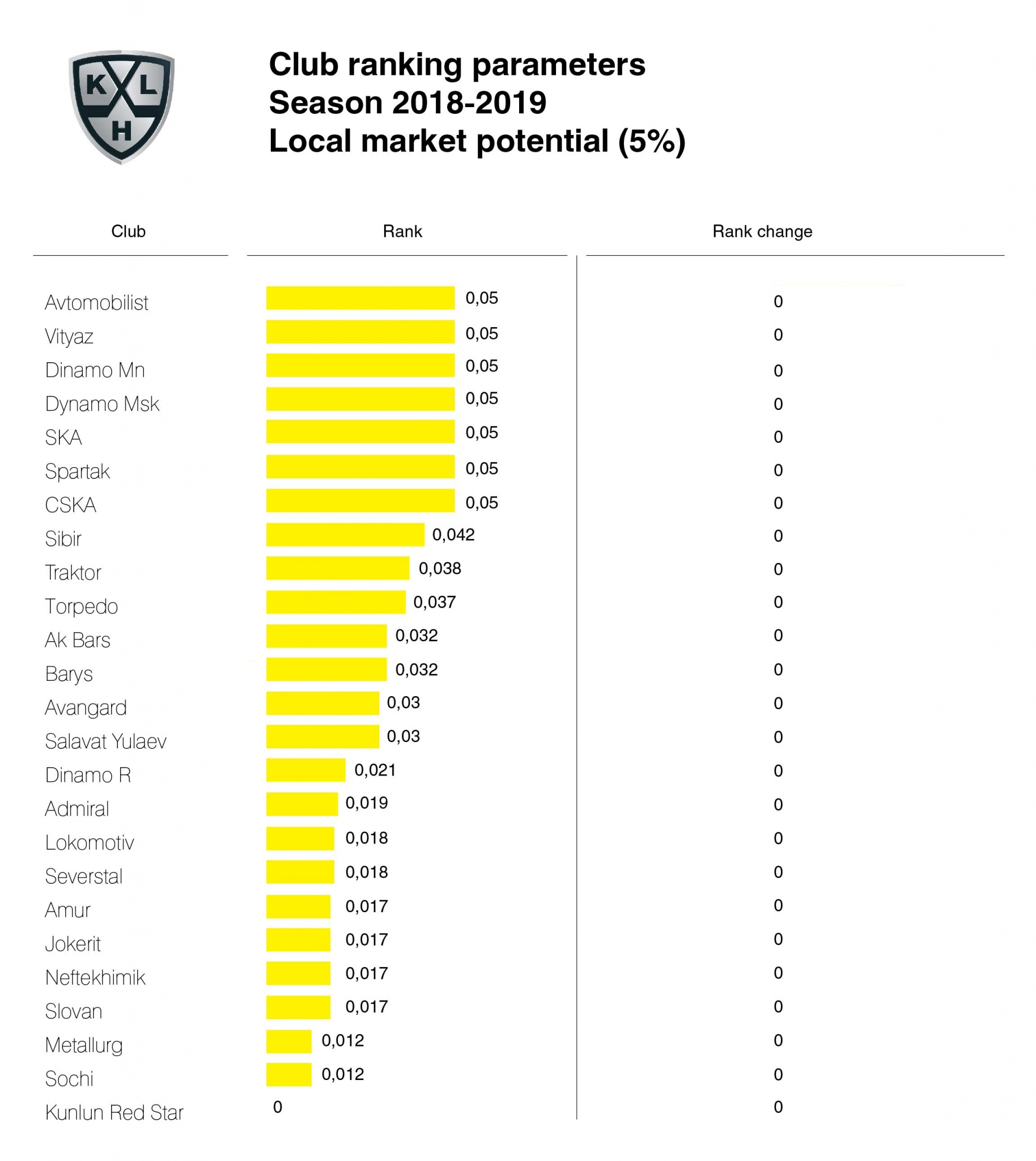 Several clubs saw their scores fall in this category. This is due to changes in the average playing budget, which climbed from 650 million rubles (US$10.1 million) to 707 million (US$10.9 million) in the current season.

The average salaries are calculated with reference to a number of factors, including whether the team reached the playoffs and the average payroll. This figure should lie between 500 million and 1,000 million rubles. Dinamo Minsk, Sibir, HC Sochi and Admiral saw significant changes last season. 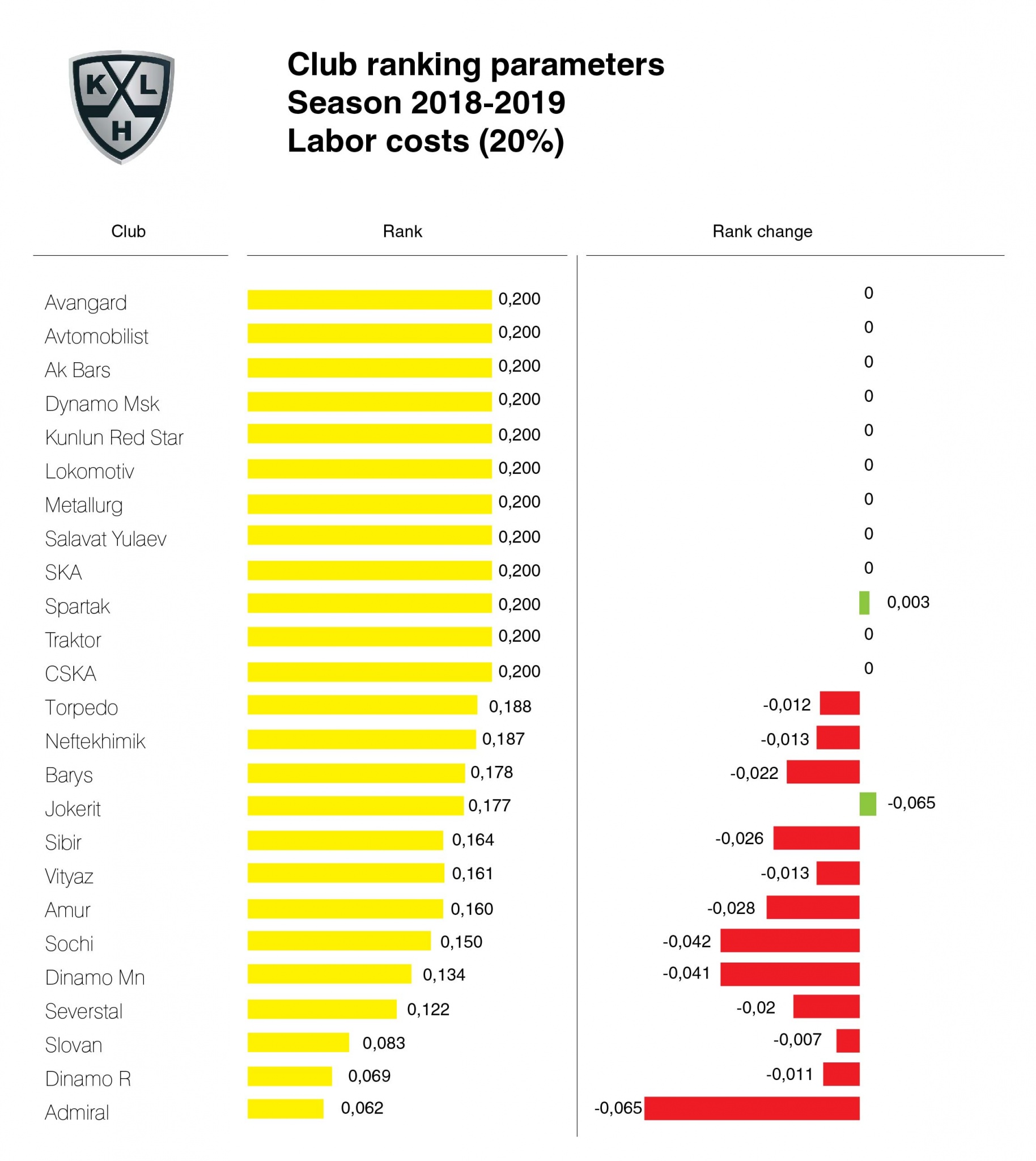 The player salaries parameter is the second most important in the overall rating, weighted at 20%. Only two clubs, Jokerit and Spartak, showed an improvement here. The Moscow team achieved a maximum rating, along with 11 others. The remaining 13 teams had reduced salary costs, with the biggest drops at Admiral and Sochi.

This parameter shows which clubs are turning away from funding from government organizations. In the 2018/19 season, six clubs (Slovan, Sibir, Neftekhimik, Dinamo Riga, Torpedo and Metallurg) improved their scores. 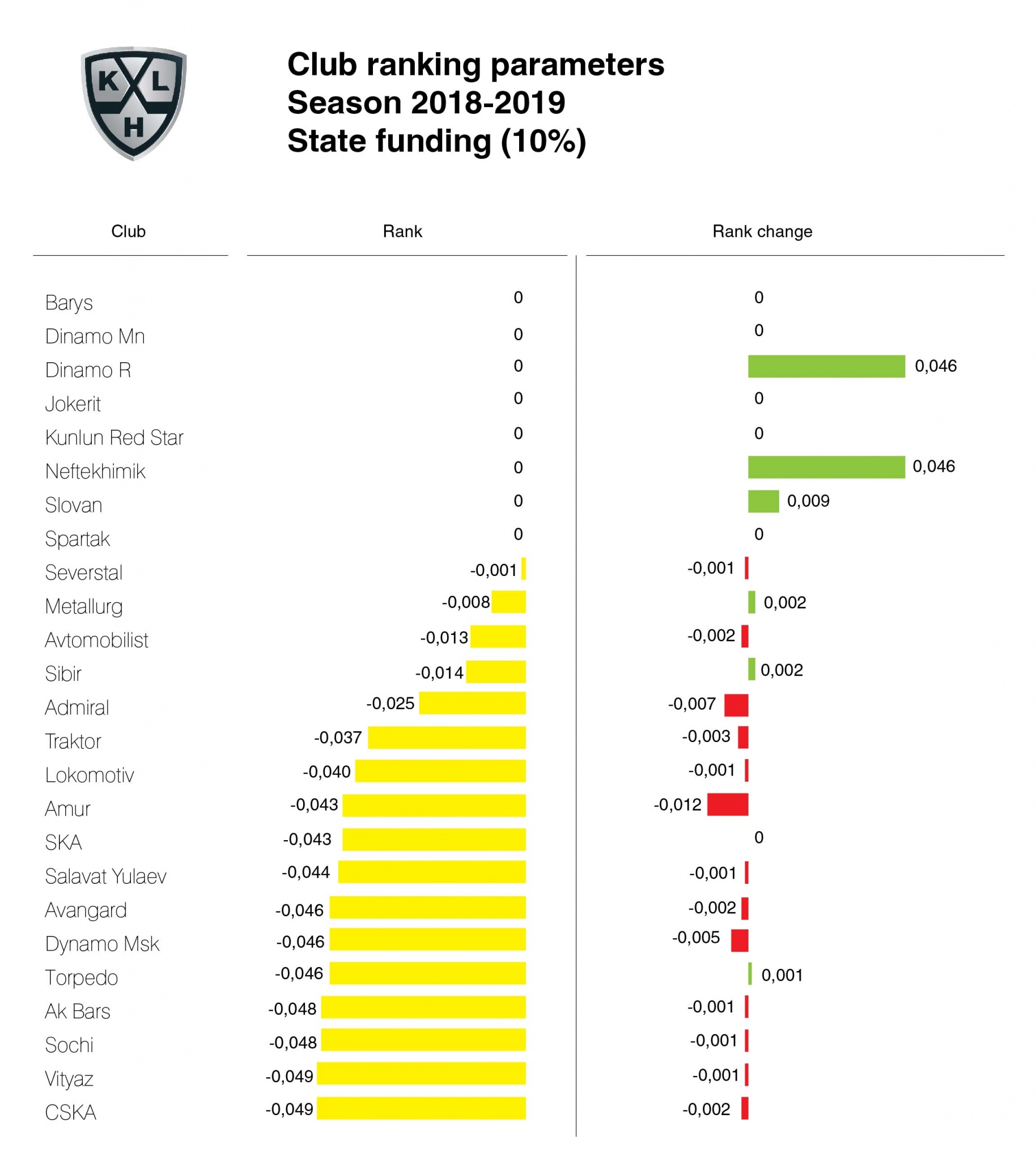 In general, we are seeing a trend to reduce the level of funding from state budgets or state-owned companies at KHL clubs.

There were also positive signs in respect of paying wages to players on time during the 2018/19 season. Eight clubs posted improved figures in this area, reducing the total number of delayed payments compared with the previous season. At the same time, Barys, Spartak and Amur had more delayed payments while Traktor and Dinamo Minsk also showed worse results than in 2017/18.

The league sees this as a crucial issues and clubs which delay salary payments by over two months are subjected to financial penalties. The introduction of a range of measures has ensured that financial discipline in the KHL has improved significantly. 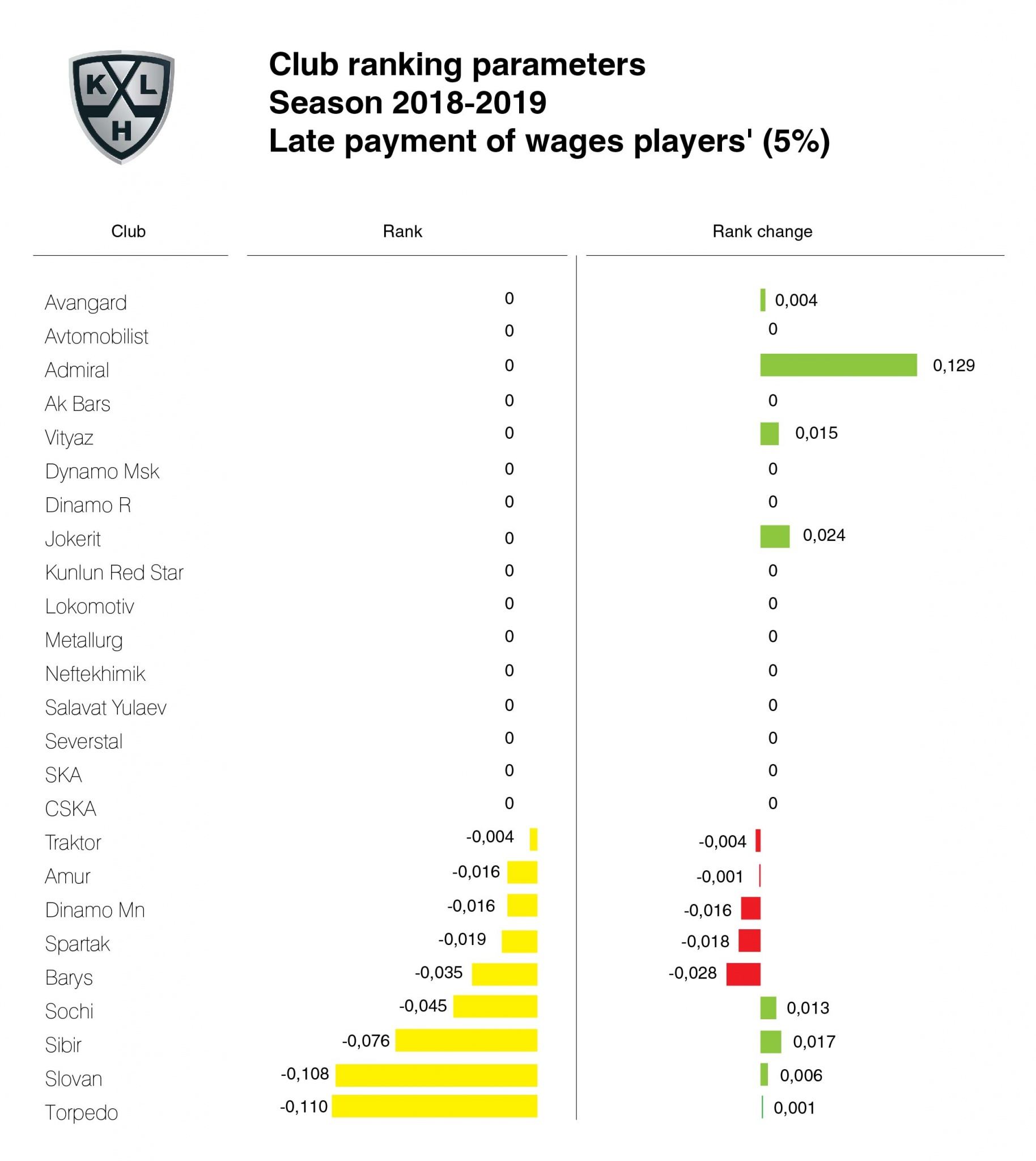 In 2018/19, nine clubs had delays in paying their players’ salaries. At three clubs – Sibir, Torpedo and Slovan – these delays were more than 150 days. In addition, there were delayed payments at Traktor, Spartak, Barys, Dinamo Minsk, HC Sochi and Amur. On the flip side, Jokerit, Vityaz, Admiral and Avangard improved compared with last season and had no delays in paying players.