Eric O’Dell: I’m planning to shave only in late April!

The 29-years-old Canadian forward is at his fourth season in the Kontinental Hockey League. He was among HC Sochi’s best players, but this summer Eric O’Dell opted for a new challenge and signed with Metallurg Magnitogorsk. He is ready to do whatever it takes to win the title with the Ural team. In this KHL.ru interview, O’Dell talked about his story, the Olympic games, and his expectations for the new season.

"In the end, I picked hockey"

Eric O'Dell was born in Ottawa, the Canadian capital. "I started playing since my early childhood," the forward recalls. "My father put me on skates. Then I got into Ontario minor leagues. I started with the Ottawa Sting, then I went on with the Jr. Senators. I won the U18 WJCs in 2008, and one year later I first played in the AHL. I then spent a few seasons in the NHL, when I played for Winnipeg and its farm team. And now I'm here! It was a long journey but very exciting. I met so many great persons, and I found friends with whom I'm still in touch."

Just as many other Canadian kids, O'Dell started playing outdoor in the long Canadian winters. "We had a country-side rink," the forward explains. "After school, my brother and I gathered with our friends and started playing there. We would go on until we could physically see the puck – we would get home only by then. And it was just the same, day after day."

An exceptional athlete, O'Dell also played other kinds of sports in his youth. "I was also playing football, the one we call soccer," he explains. "I loved it, and I was hard to stop! A bit later, I also played rugby, and once again, I was excellent. However, in the end, I picked hockey. The school was requiring more and more time; thus, I had to make a choice." 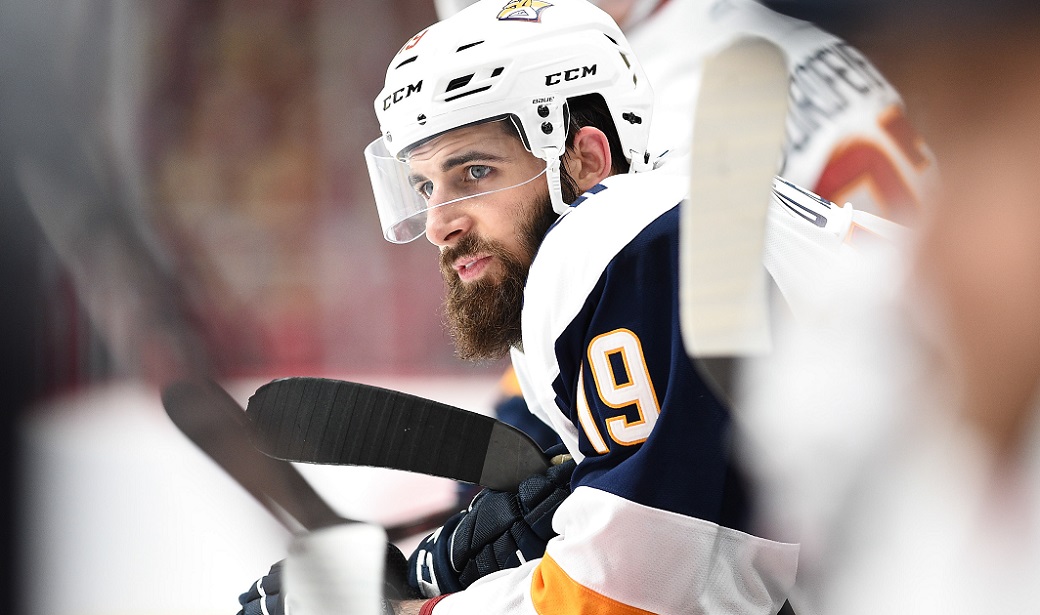 "What impressed me the most wasn’t architecture, but the kitchen!"

In 2008, O’Dell visited for the first time the country that will be the one where he would play the best years of his career as Team Canada won the U18 WJC gold medal in Kazan, Russia. "It was my first time in Russia," O’Dell recalls. "I didn’t know what to expect. It was my first time so far from home. We were such a great team, pretty much everyone on that team was grown up together. It was hard, I didn’t know anything about Russia. But we had a great time."

In that tournament, O’Dell had 4 (1+3) points in seven games for Team Canada. "We visited the Kazan Kremlin and the Kul Sharif Mosque. However, what impressed me the most wasn’t architecture, but the kitchen! We had a chance to visit a factory and everything was incredibly tasty!"

The forward is very proud of having won that medal. "In my father's office, there's a little family museum, where he holds all my trophies and jerseys. That medal is in the best place."

We had a country-side rink. After school, my brother and I gathered with our friends and started playing there. We would go on until we could physically see the puck.

O’Dell represented Canada only another time, at the 2018 Olympic Games in South Korea. "It’s hard to describe the Olympic Games’ atmosphere with your own words," says the Canadian, who grow up idolizing Joe Sakic and his Colorado Avalanche team. "You get whatever you need as the organization is simply fantastic. When you get to the Olympic village, and you see those guys with medals hanging at their neck, you literally see dreams turning into reality. I was glad to be there with Canada, so was my family to support me. Representing your country at such a level is incredible. When I got back home, I had the feeling that the whole of Canada was proud of us."

The next Olympic Games are scheduled to take place in Beijing in 2022. However, the forward doesn’t want to speculate. "It’s still very far!" – he says with a laugh. "Anything can happen. Maybe this time around the NHL will participate. Or maybe it will not. We’ll see."

After lining up for three years with HC Sochi, O’Dell decided to move East and signed with Metallurg Magnitogorsk – one of the traditional KHL powerhouses. "I started thinking about moving after last season ended," O’Dell recalls. "I had several offers. At once, Brandon Kozun called me and said that he accepted an offer from Metallurg. After that call, it was easy to decide. I know that Metallurg is a great organization that is always a contender for the Gagarin Cup. This was the most important factor for me. Each game here is played to reach the top goal. And I think that we have good chances to reach it."

Like most of the other foreigners, O'Dell consulted with his countrymates before moving to a new team. "I talked with Matt Ellison – he's one of my best friends," he explains. "He loves both the city and the team. After talking with him, everything was just easier, including for my wife. She was a bit skeptical about moving – you know, in Sochi, you have a warm climate and the seaside. My wife and my kids were happy there. However, my family understands that winning the Cup is my career's main goal, and thus, they supported my decision to move to a team where I have a great chance of doing it."

Opposed to Sochi, in Magnitogorsk, the winters may be severe. But O'Dell isn't scared about it. "We are from Canada! We're used to low temperatures. When I was in Sochi, I really missed the snow in winter." O'Dell's family hasn't settled down on the Urals yet – they will in November. However, they will be celebrating Christmas home to get back supporting Eric during the playoffs. 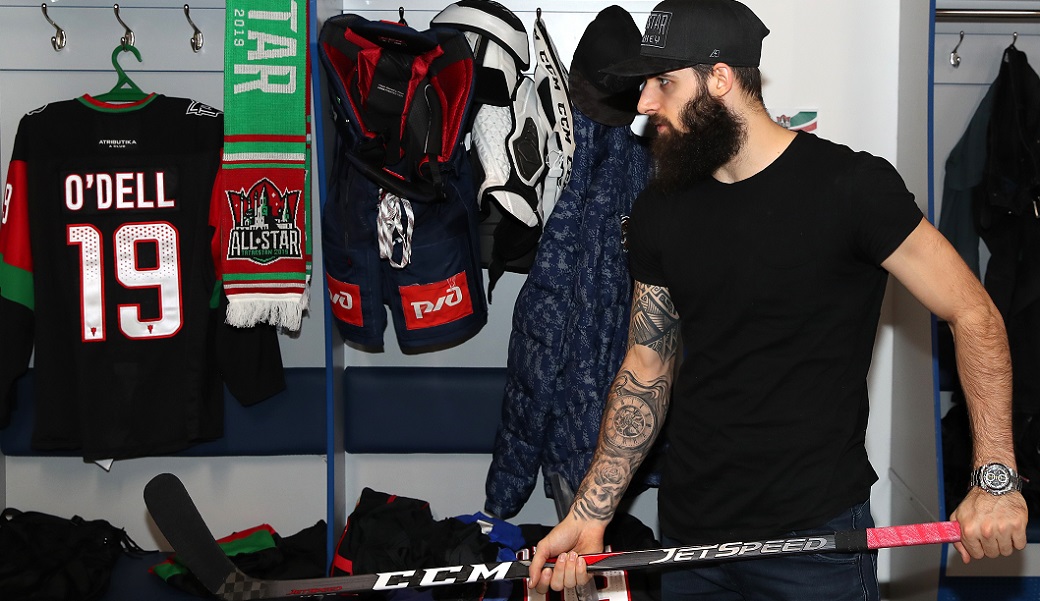 As he is at his fourth season in the League, it is possible to call O'Dell an expert on KHL. "Here, hockey is played at a very high level," O'Dell explains. "I am lucky to be playing here. I enjoy working here in this League. I really love it. Yes, at first it wasn’t easy to get used to the constant flying. However, now it’s a routine already, and I have no problems whatsoever. Moreover, the hardest trip, in the Far East, it's just once a year."

The forward is now discovering Magnitogorsk. "Of course, I can’t say that I fully studied the city yet," O’Dell admits. "I mostly spend time at home. Sometimes I visit a restaurant. There are in Magnitogorsk many great places where the plates are delightful. I also visited a couple of malls. I get to know better the city every day. Magnitogorsk is not a big city, and accordingly, it's everything near. A lot of people know each other. I love it!"

I understand something, on the taxi, at the restaurants or when I go shopping.

As tradition dictates, next week Metallurg players will visit the Magnitogorsk Iron and Steel Works – the team's main financer. "I really don't know what to expect from the visit," O'Dell explains. "However, many of the players told me that it's an incredible experience! It must be great to see with your eyes how such a huge factory works. I have the utmost respect toward the work of so many people, among the ones a whole city was built. They are our fans, and we feel responsibilities toward them. We need to remember them and to play for them."

In Magnitogorsk hockey is the number one sport and other than the Metallurg umbrella, there is a women's hockey team called the Night Witches. "What a name!" – O'Dell smiles. "It's great. Women's hockey is an Olympic sport – I watch their games, and I enjoy them. Women's hockey makes progress every year. Only in Canada, there are a couple of new pro teams every season. I think that if things keep on going this way, the sport will soon achieve new heights." 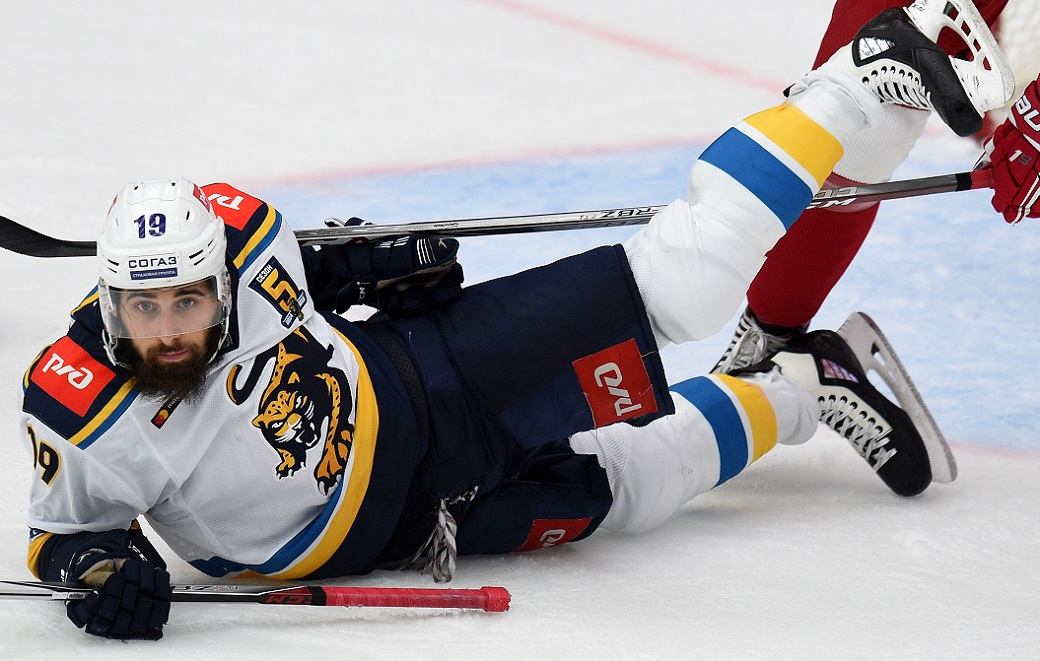 Eric was born in a megapolis, but it doesn't look like he's out of place in Magnitogorsk. "Pretty much the opposite," O'Dell explains. "When you live in a big city, you only have time to get home, eat, and watch some TV. Distances and traffic jams won't allow you to see your friends that often. Here it's all within reach and much more comfortable."

As in Magnitogorsk hockey is so popular, it’s unavoidable that players, especially the foreign ones, are recognized and asked for photos and autographs along the town’s streets. "Maybe I get recognized because of my beard!" – he adds.

Even if today's world is getting smaller and smaller, the language barrier is still a challenge in Russia, especially outside of Moscow and St. Petersburg. In three years, O'Dell made some little progress. "However, I know only the minimum. I understand something, on the taxi, at the restaurants or when I go shopping. Of course, I know all the swearing. Seriously speaking, learning Russian is very hard. The language has another alphabet, other rules."

The veteran of more than 150 KHL games used to be a fishing enthusiast. "It's true, but I don't fish for a lot of time already," O'Dell admits. "On summers, I mostly focus on my kids and family – I really miss them during the season. However, I know that in the team many players enjoy fishing. If they call me, I'll join them!"

As his move to Metallurg confirms, O’Dell set only the highest goals for the upcoming season. "I am here just to win! We have a solid roster with many good players in all positions. Reliable goalies, a solid defense, and a powerful attack. All the guys are real professionals."