On Friday, the 6th of September, at a meeting of the KHL Board of Directors in Moscow, approval was given to the distribution among member clubs of profits earned from the sale of TV rights to matches in the Championship. The total sum shared out between the League’s teams amounted to more than 419 million rubles, over $6 million, subject to Russian Sales Tax.

The amount in US Dollars may differ from the one indicated in the article, in connection with the changes in the ruble/dollar rate. The amounts are translated in US Dollars according to the 06.09.2019 exchange rate.

The KHL began the distribution scheme in the 2014-15 season, deciding that the proceeds obtained from the sale of television rights should be shared among the member clubs.

The proceeds are shared according to the following formula:

- a fixed and flat 30% rate is evenly distributed among all the participants;

- a further 40% is distributed among all the participants according to TV demand; and

- the remaining 30% is distributed among all the participants according to performance.

The teams with a higher demand in TV rights received a larger sum. There is a direct correlation between the clubs’ income on the results of sales of TV rights to international and regional licensees and the territory of the respective team.

To calculate the distribution of the cost of a license for a game between two teams, the following procedure is defined

If the broadcast of the games bought from the territory of the club, the club got 70% of licence's cost of distribution.

Jokerit received the highest sum due to the TV demand with 31,3 million rubles (over $475 thousand) – an almost two-time sum if compared with the second place, Dinamo Riga. Payments to clubs based outside the Russian Federation are not subject to VAT. 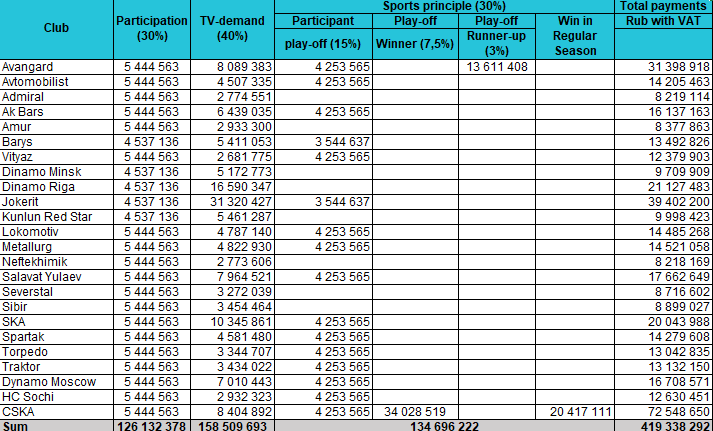