Board of Directors to introduce a salary floor from 2020/21

The KHL Board of Directors caught up with the progress of various working groups at a meeting on Friday, Sep. 6 in Moscow. Among the questions under discussion were changes to the tournament structure, loan deals for players and the introduction of a salary floor for KHL players starting from the 2020/21 season.

As part of the process of automating the collection of advanced statistical data in real time, the KHL has installed new equipment in the arenas of all 24 KHL clubs. In addition, every club has been given smart pucks and chips that will generate the stats from every game.

All clubs will have free access to a basic stat pack that operates in real time. This will enable the coaching staff to analyze the performance of their team and the opposition. The new system will be operational in every game this season and is already offering information about the leading players in a host of entirely new categories.

419 Million for clubs and a new Board of Directors

For the fifth season in a row the League distributed the monies earned from the sale of TV rights among the member clubs. The KHL encourages all clubs to use these funds to improve their arenas and enhance the game-day experience for supporters.

The biggest payment went to last season’s champion, CSKA. The Army Men received 72.5 million rubles (US$1.1 million). Next on the list was Jokerit with 39.4 million, of which 31.2 million came from its televised games. Click here for full details of payments to clubs.

Changes to the KHL championship format

The KHL covers a huge geographical area and is attracting the interest of many new teams. Questions about changing the format of the KHL championship are being explored in advance to ensure there is a clear plan – especially from a sporting and logistical point of view – to accommodate new clubs from different regions.

The working group held a face-to-face meeting in July and then sent out a further survey of the clubs. Each club had the opportunity to share its opinions about the future of the competition. A clear majority of teams stated that they would like to see all teams continue to play each other at least once a season. The working group’s findings will be taken into account as the league expands.

Following a survey among the clubs and a face-to-face discussion of the issue, the Board of Directors has decided to create a mechanism to manage loan deals for players.

We need clear rules that can be applied to everyone. The league is following what is happening and there is a full record of player trades and questionable transactions. ‘Hidden loans’ really do exist. We understand that we don’t need to go after everyone; instead we need clear rules that establish the restrictions on players and terms. All of these issues should be worked out and submitted to the next meeting of the Board of Directors.

The Board of Directors took the following decisions:

From 2020/21 the floor will represent 30% of the overall salary cap. The percentage will increase season-by-season. 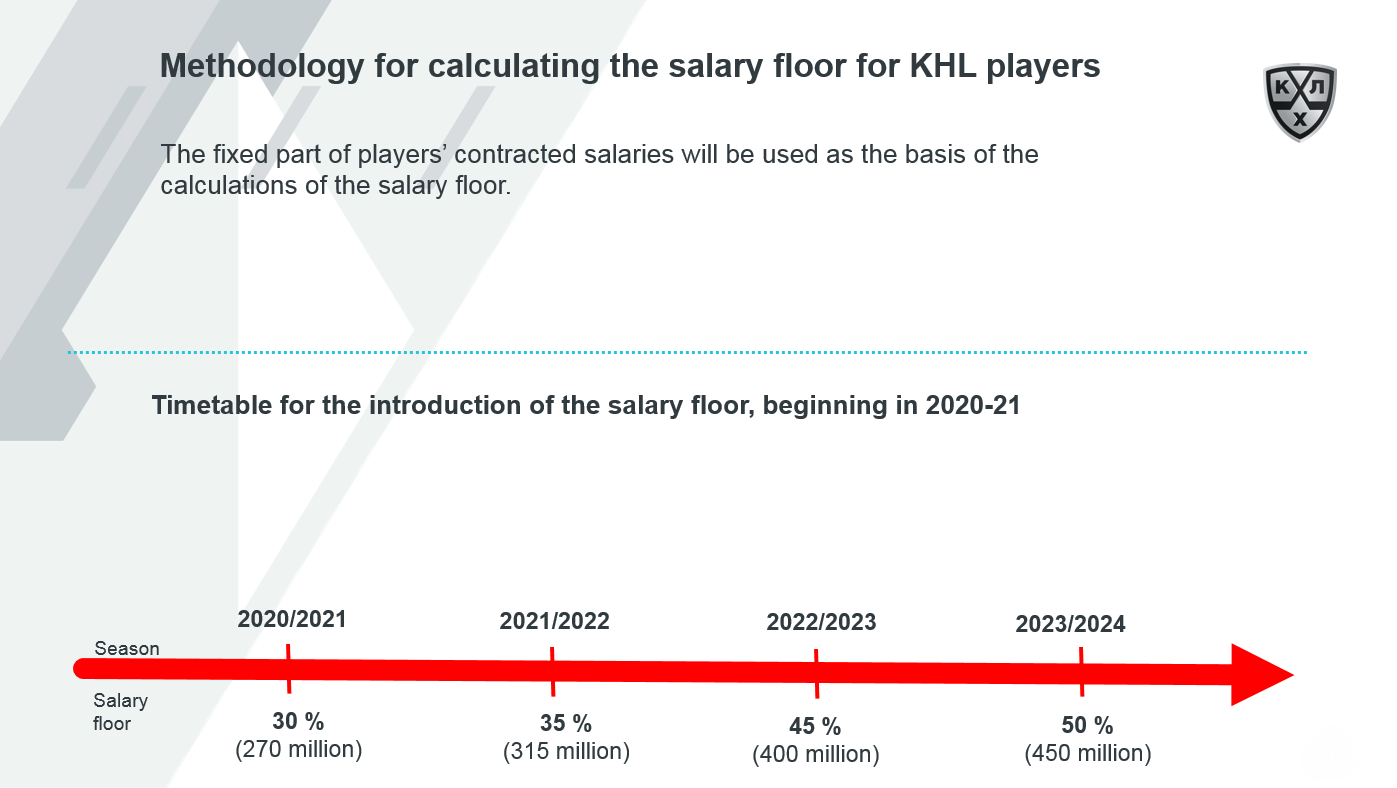 When approving the participation of teams in future KHL championships, clubs will need to meet one further standard. That standard will define the minimum permitted expenditure on salaries, and also individual and team bonuses. In 2020/21 this should be 35% of the salary cap of 315 million rubles.

Teams that fail to meet the salary floor requirements will face sanctions. The first and second offenses will lead to financial penalties, a third offense will see the club removed from the championship.

In memory of Lokomotiv

On Saturday, September 7, in memory of the tragic air disaster in Yaroslavl eight years ago, the KHL and its clubs will hold special memorial events. At the four games in Helsinki, Sochi, Khabarovsk and Novosibirsk, 44 Lokomotiv Yaroslavl scarves will be displayed in the tribunes – one for each of those killed on Sep. 7, 2011.

All eight teams will take to the ice with memorial patches on their game jerseys. In addition, each arena will create a memorial zone and the games will start with a minute’s silence.