Linus Omark: The Green Derby is always a remarkable game

The KHL star, Salavat Yulaev's leader and one of the most creative players in the league, Linus Omark, tells KHL.ru about his team's goals, the upcoming Green Derby in Davos, the best Christmas gift, his future, and much more.

Currently, Salavat Yulaev is on the fourth spot in the Eastern Conference standings and is getting ready for the next games, among which there will be the Green Derby in Davos on Dec. 23. Linus Omark currently leads the team with 33 (8+25) points. The 2019-20 campaign is Omark's fifth season in Ufa. 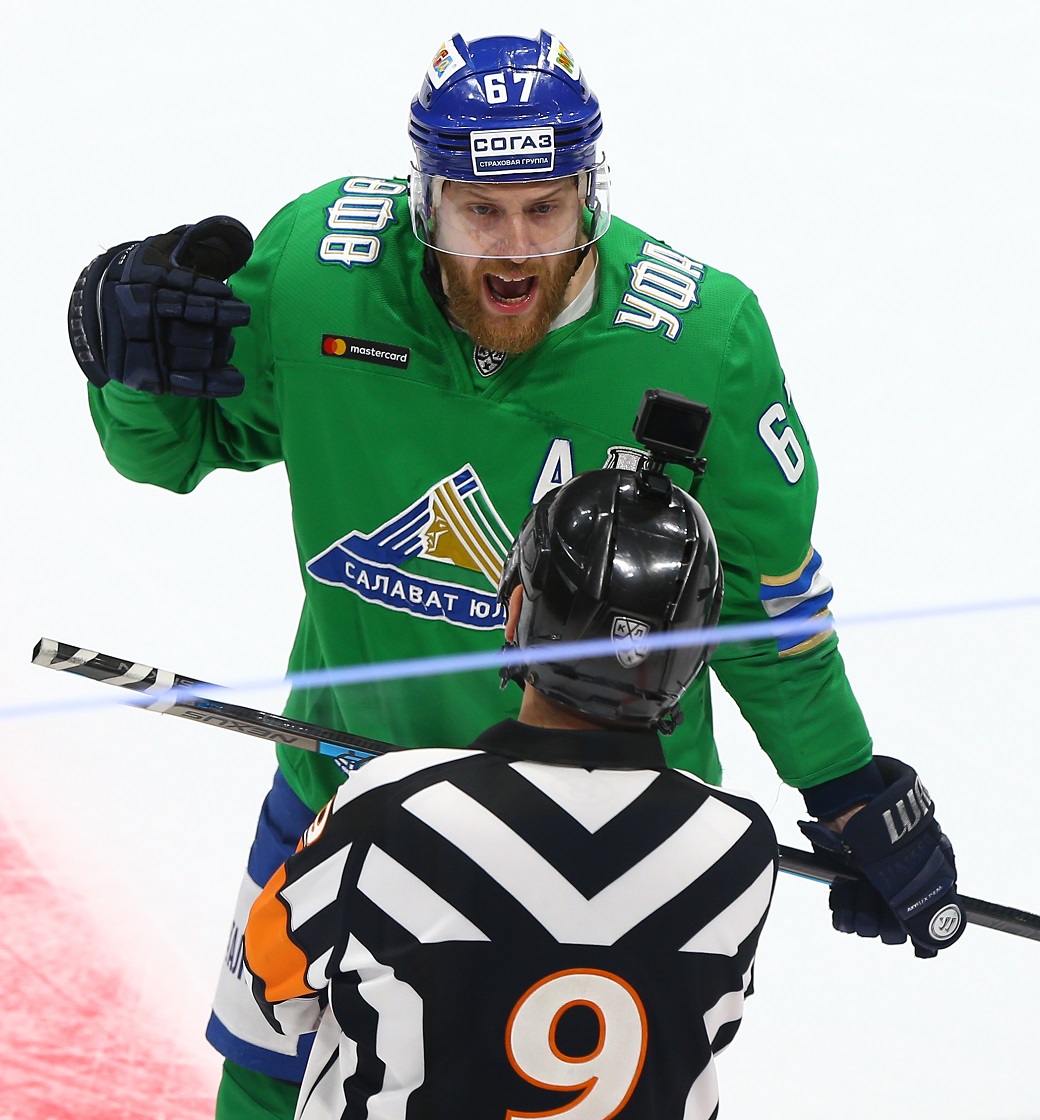 "I can't say that we are satisfied with our results"

The KHL regular season has reached and surpassed the halfway mark, and Salavat Yulaev is currently bond for a playoff spot with the home advantage. However, Omark is not happy yet. "I can't say that we are satisfied with our results," the Swedish forward says. "We lack some consistency; however, I don't think that we had bad series if we exclude a four-game scoring streak between November and December. The playoffs are to start in two months, and we need to start showing our best hockey as the fight for the cup approaches."

Despite its roster, Salavat Yulaev lies in the second half of the powerplay standings, primarily because of many problems in the first few games of the season. "I think that the problem is that at first, we rolled our lines during powerplay stretches," Omark tries to explain. "When you're playing the powerplay, the trust is essential, and you need to know that you're the number one and that you're responsible for the result. Recently, we started playing more with the man advantage, and the goals arrived. It's much better to have this kind of problem now than during the playoffs." 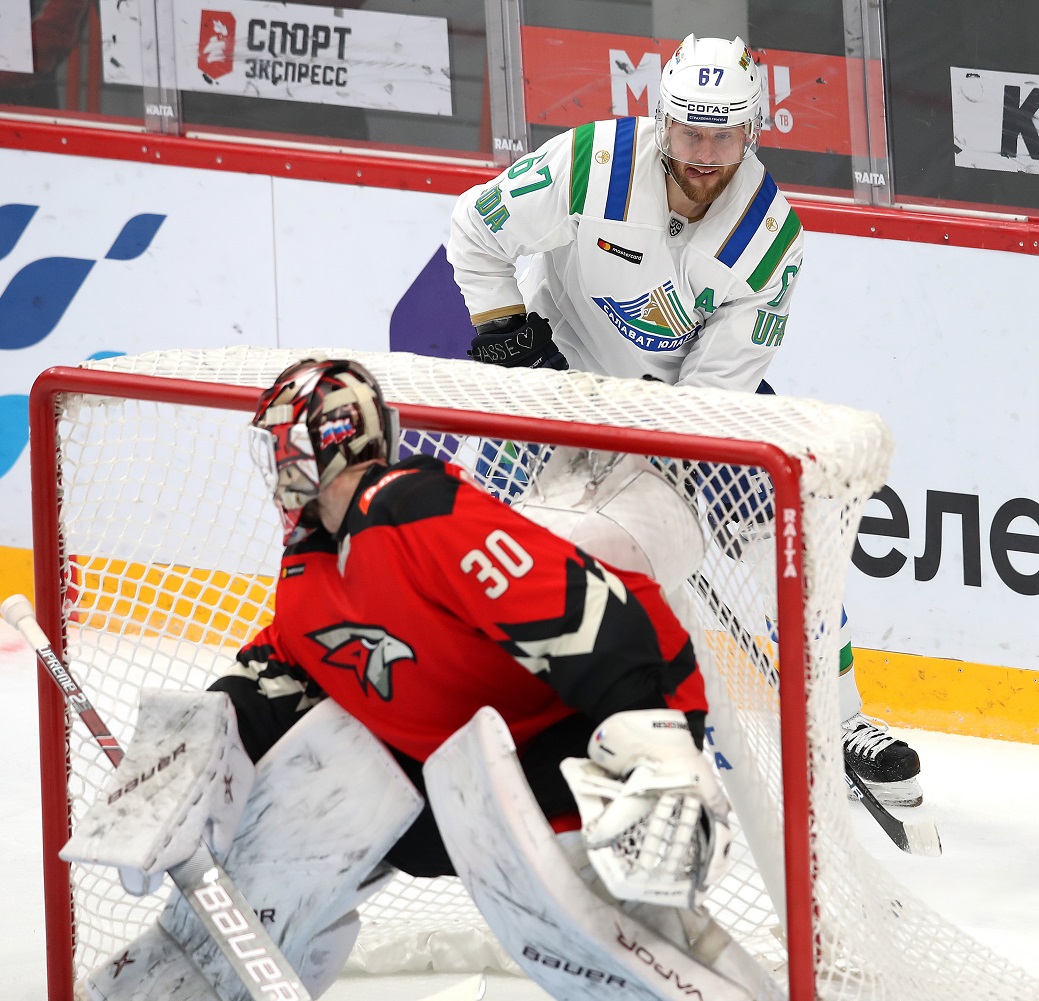 In the summer, Salavat Yulaev decided to change its trainer, signing Matias Sarvela. "Last year we had a fantastic trainer, Jarmo Koivisto," Omark recalls. "But now Matias is working with us. He brought a lot of energy to our team. He's young and smart, and a great trainer. I was surprised to see his professionalism, and I hope that he's in Ufa to stay."

Recently, Salavat Yulaev had a busy schedule, with 13 games in 25 days. "In November and December, we had a lot of games," agrees Omark. "I like tight schedules, but when it's like that, it's hard to play every game at your hundred percent – this is physically impossible for any athlete. Matias helps us, and I try to rest my body."

In these moments, the family helps. "We live all together in Ufa. When I step into my home, I try not to think about hockey at all. I play with my kids and spend some time with my wife. Spending time with my family helps me relaxing and getting my energies back." 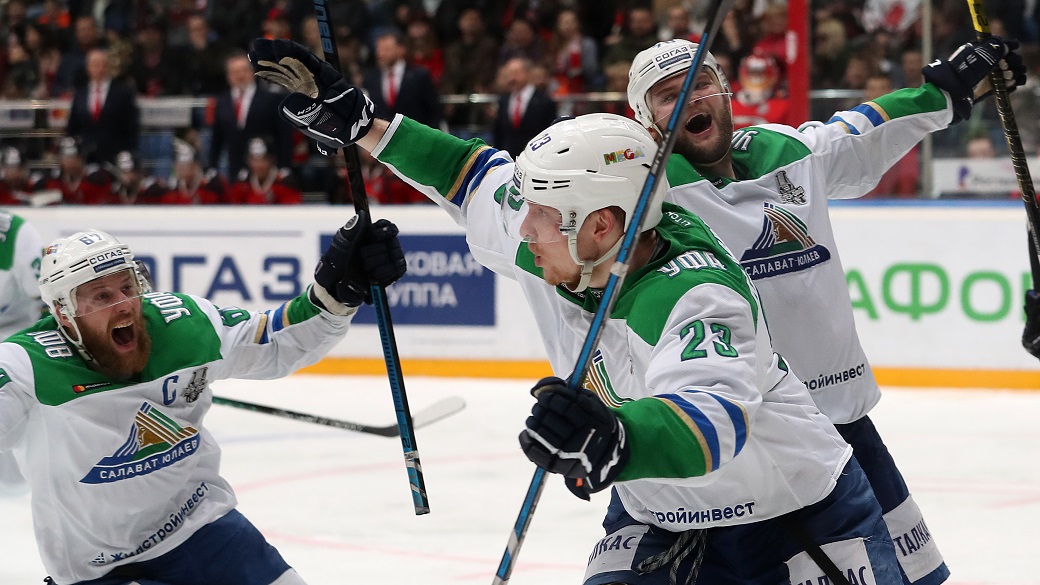 Generally a high-scoring team, Salavat Yulaev has recently seen the lamp behind the crease lightning less often, if excluding the 9-1 triumph over Dinamo Minsk. "It's hard to try and explain why," Omark says. "Our goal is to win each game, no matter the score. As I said already, with so many games, it's hard to be in good shape every time. We have a fantastic team with a lot of excellent players; thus I'm sure that things will turn out just fine."

As it is often the case with Tsulygin, Omark doesn't have constant linemates. "I can play with any player," he says. "It makes no difference to me. Of course, Hartikainen and I close each other for a lot of time, and we love playing together. Kemppainen left the team, and Manninen replaced him, and we started well together. However, later the coach decided to play him with Soshnikov, to create a second high-scoring line. This decision was excellent for the team. Anyways, it's up to the coaches." 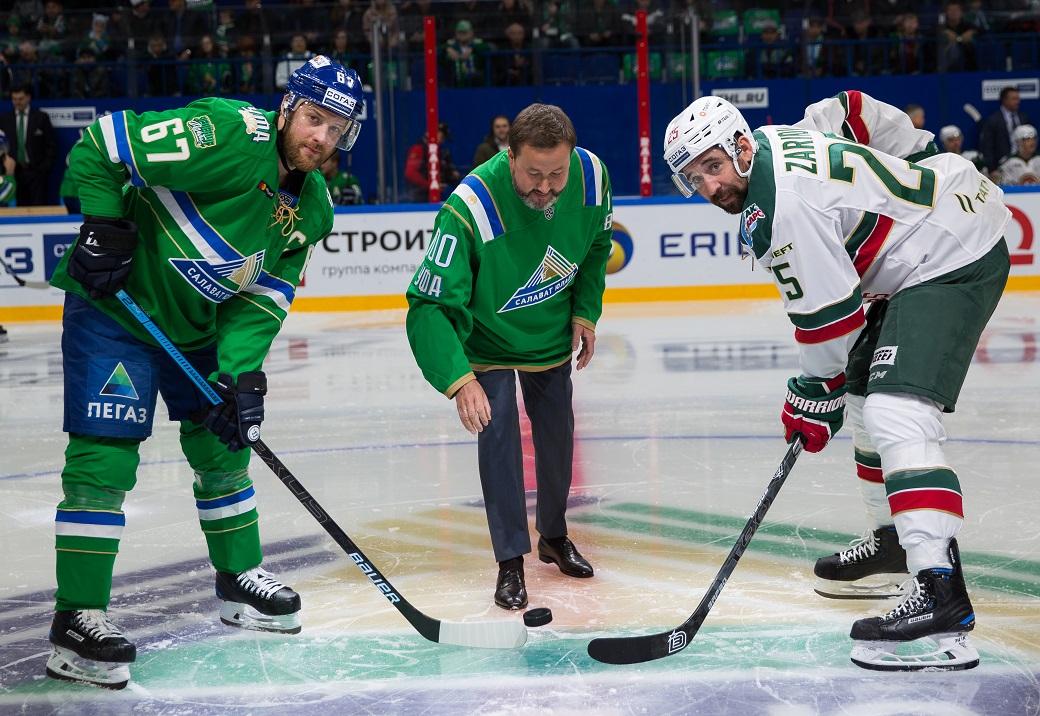 Losing Kemppainen, with whom Omark played excellently last year, was perhaps a blow for the Swedish forward. "Kemppainen did an excellent job for us," he confirms. "He's a big boy, very good in the slot. His game allowed Hartikainen and me to play an efficient passing game. We had a fixed set of roles in that line. Joonas worked very hard in front of the crease and the corners, and I'm sure that he misses us as well."

Many of Ufa's opponents declared to have learned Omark's line game and perhaps playing became harder for them. "If they learned our game to the end, then we would have stopped scoring," he explains. "But they don't have a chance anyway," Omark adds with a hearty laugh. "If talking seriously, I think that everyone knows the way Hartikainen and I play, we like to go behind the opposition's crease. Many teams try to match us with their top defensemen, but frankly speaking, we are yet to meet anyone better than us."

Despite all of the lines shuffling, Omark is currently Salavat Yulaev's top scorer. Judging by the stats, he is more a playmaker than a goalscorer. However, in his youth, he was scoring more than distributing assists. "Oddly enough, I think that today my shot is much better than when I was younger," Omark says. "However, Hartikainen shoots even better, so I try to give him the puck. Some years ago, I played for Dynamo Moscow with Johan Harju. He's a real playmaker, and he prefers passing over shooting. I had to take the initiative more often. By the way, we are still friends; he is now playing in the Czech Republic." 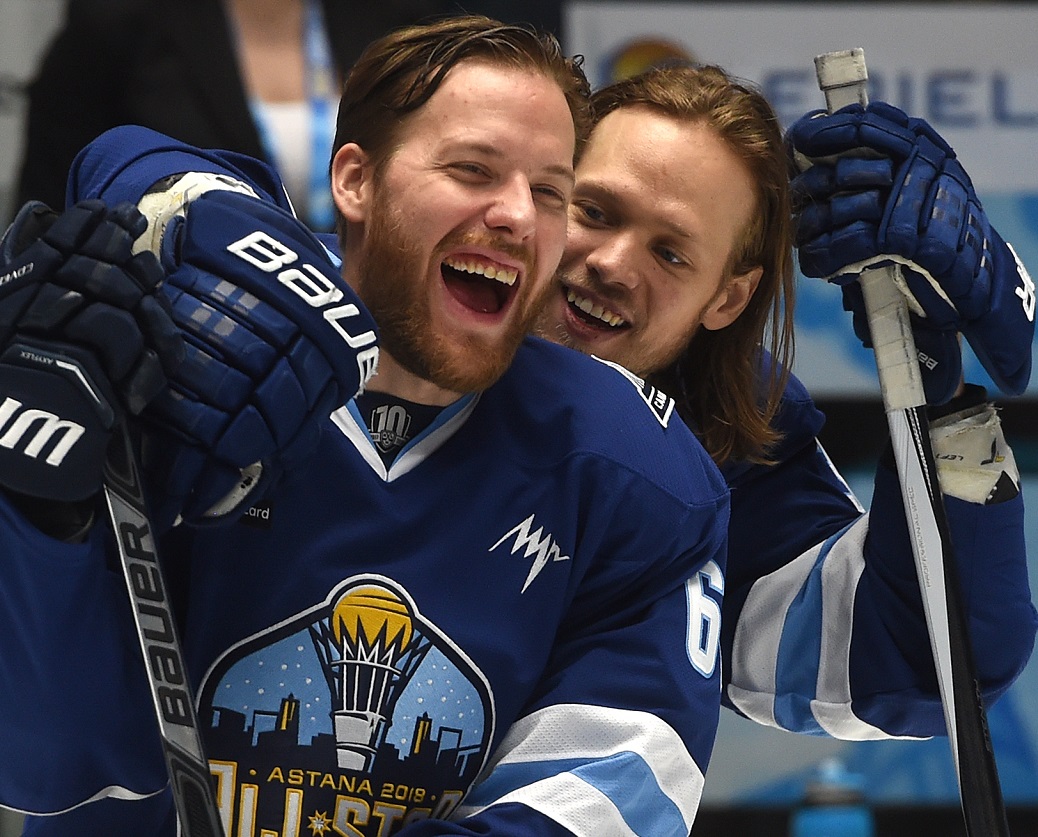 Other than scoring, Omark is now more often involved in scrambles with the opposition, including a fight with Ak Bars' captain Danis Zaripov during one of the Green Derbies. "We really want to win this season," Omark explains. "I try to play more aggressively and crash the net more often. The game will be more physical in the playoffs, and we need to be ready."

Omark's line is usually the one appearing more often in the scoring sheets. "However, we have so many excellent players," he adds. "Soshnikov is currently the top goal scorer in the league. We also have Manninen. The line with Kadeikin, Kugryshev, and Zharkov was the best in the most recent games. We feel a lot of support from our team, and I hope that we will find the ideal balance in the lineup in sight of the playoffs."

Despite Omark's words, Salavat Yulaev's clashes against other top teams more often than not appear in the L column in the standings. "I thought about it. However, we defeated both CSKA and Ak Bars, and when we lost, it was always a close game. We'll soon have a series of games against serious competition, with another Green Derby, then Avangard, CSKA, and Lokomotiv. We can't wait to play those games."

Another very successful player this season for Ufa is Nikita Soshnikov. He returned home after a few years spoiled by injuries in North America, and now is not only scoring goals for Salavat Yulaev but is also a regular for Team Russia at the Euro Hockey Tour. "I think that his secret is his competitive attitude," he explains. "He transmits us a lot of energy. Although he was never considered a top sniper, he shoots and scores a lot. He's a fantastic player, and I'm sure that he will carry on." 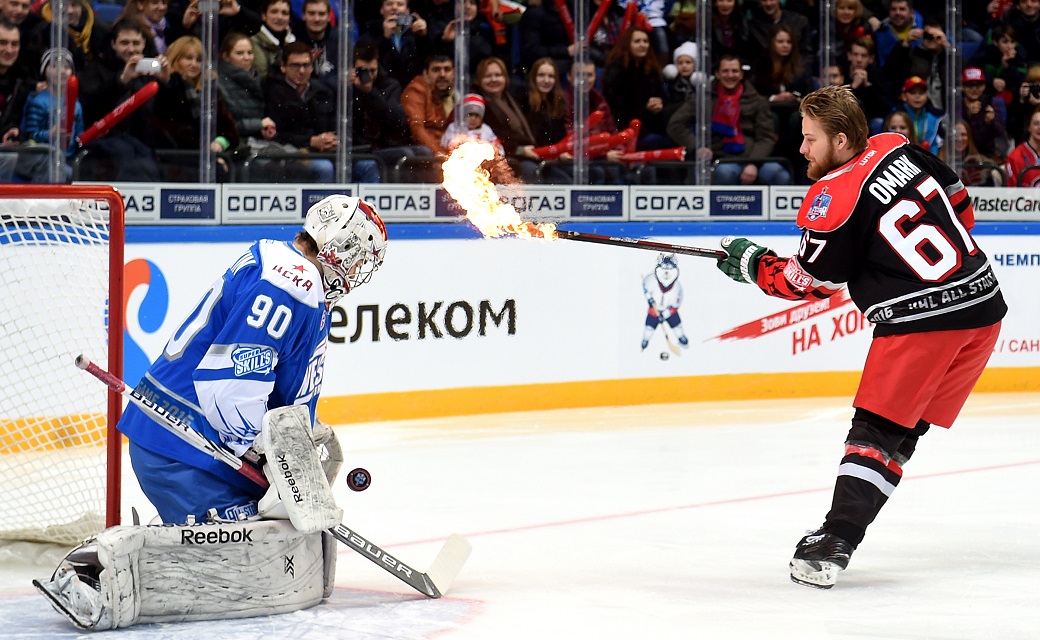 Soon, on Dec. 23, Ufa will face Kazan in Davos for the KHL World Games. The Swedish forward spent the 12-13 campaign lining up for EV Zug of the National League.

"I've picked up an injury the season before, and when it was clear that there would be a lockout, I decided to play in Switzerland for a year. Zug was very interested in signing me. Switzerland is a wonderful country with friendly people and attractive places. That season was incredible, I was playing on a line with Henrik Zetterberg and Damien Brunner. I can't wait to be in Davos for the Green Derby and the Spengler Cup."

Many said that moving a game abroad can have a negative impact on the rest of the schedule. "The Green Derby is always a remarkable game," Omark says. "The important there is to get energy from the rivalry and the crowd. I hope that we can feel the derby's atmosphere in Switzerland. I'm sure that there will be many Russian fans. I already played the Spengler Cup when I was with Jokerit. We had a close matchup in the playoffs against CSKA, so I don't think it harms the rest of the season. Quite the opposite, I am sure that it will help us get the right charge. Some of us will move to Switzerland with their family, and we will celebrate the New Year in style."

Next April, Omark's contract in Ufa will run out. The forward said more than once that this will be almost surely his final year in the KHL. "Chances are still quite high," he confirms. "Of course, if the boards want to renew our ties, I'm always open to talks. But it really depends on my family. We frankly haven't discussed next season yet; therefore, everything is possible." 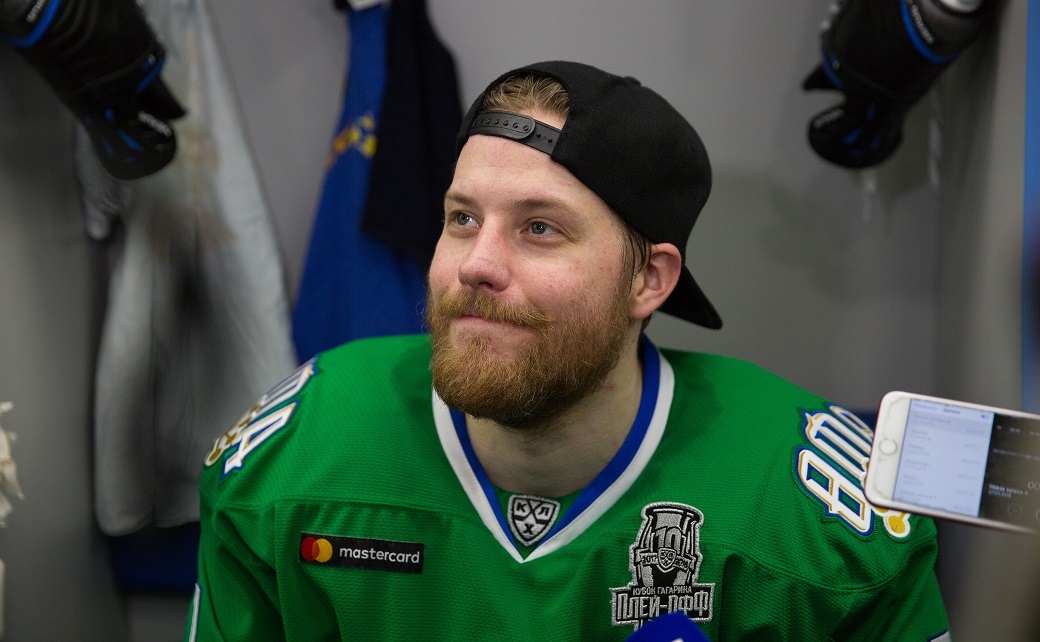 Born on Feb. 5 in Everturnea, Sweden.