Alexei Morozov: ‘We stand by our salary cap’

Alexei Morozov was elected president of the KHL on Feb. 14. He will be in post for an initial four-year period. His appointment was officially unveiled by outgoing president Dmitry Chernyshenko, who is taking on a new role as Deputy Prime Minister in the Russian government.

“I wanted to come so that I could speak from the heart and thank everyone for the five years we spent together,” Chernyshenko said. “Although the KHL is just 12 years old, it is already a significant player on the international stage. A nobody can deny that this is one of the most successful international leagues in the world.”

Chernyshenko and Morozov held a joint press-briefing for media representatives.

Today I’d like to thank everybody who works for the league for all their efforts. From the day I arrived we focussed on two important tasks: reworking our internal processes so that they can operate flawlessly, and creating a strategic plan that is attainable and enjoys the support of the KHL Board of Directors and its chairman, Gennady Timchenko.

Today, the league is in a stable financial position, capable of withstanding any turbulence. We have found an effective working model, without compromise in terms of financial discipline and with zero tolerance for doping. Our refereeing is also developing.

In terms of the quality of our product, we are seeing continuous growth in contracts with our partners. The KHL is attractive to partners. The championship is getting more and more exciting and unpredictable. I’m sure that the salary cap and salary floor will help clubs to make effective use of their resources.

I am in no way embarrassed to hand over the league to a man who, although he is still young, is a legend of world hockey. Alexei Morozov represents all Junior hockey and comes with a spotless reputation. It may be hard for him to remain free of criticism in this role, but I hope he will be able to do that.

In his years with the KHL, Alexei has developed from a successful athlete to an effective manager and has shown an incredible capacity to learn. And it’s great that he is a true hockey man. In the past I have been criticized for not being one, but that was not entirely my responsibility. I was brought in as a manager who needed to gain a swift and detailed understanding of the game. Now, from my new position as deputy PM with responsibility for sports, I’m looking forward to continuing a dialogue with the wider hockey community. We have big plans.

Hockey enjoys a fortunate status. It is the leading sport in our country and we will certainly develop it as quickly as possible. We are joining forces, we are fully unified in our approach to growing the game with the support of the Russian Hockey Federation, the Ministry of Sport and the regional authorities across Russia.

I’d like to start by thanking Dmitry Nikolaevich for all that he has done for Russian hockey and for the level to which he has taken the league. I count myself fortunate to be a part of such a great team! The league is developing and moving in the right direction. I wish Dmitry Nikolaevich success in his new role. Whatever he takes on, he achieves to the highest standards. We look forward to welcoming him back to our events as an honored guest.

After the formalities, the new KHL president answered questions from journalists.

What will be your first steps in your new role?

We have a clear strategic plan – we are introducing a salary cap and salary floor, at the request of the board of directors we are looking to regulate player loans. We will continue this work so that next year we can introduce changes in the regulations that will make life easier for our clubs. In the near future I will be meeting with the KHL vice-presidents with responsibility for various areas. I need to get an inside track on the league’s work. It’s good that Dmitry Nikolaevich’s team will remain in place – it has worked well for several years.

Will there be any changes to the proposed salary cap?

No. We stand by our figure of a 900 million ruble cap (US$14.1 million). This is the right thing to do. It will give teams an equal chance and make the competition more intense, encouraging more fans into the arenas. Every team should compete on equal terms, nobody should have an unfair advantage.

What can you say about expanding the league?

We need to look at the details. However, we are interested in exploring opportunities in Europe and in Asia.

What’s your understanding of the situation around those clubs who no longer play in the KHL? (eg Lada Togliatti, Metallurg Novokuznetsk)

At present, those clubs have no plans to return to the KHL, although in Novokuznetsk they are building a new arena. We will follow their progress, we are always in contact. In general, I intend to keep in touch with all club directors.

How do you anticipate developing the relationship between the KHL and the Champions Hockey League or the NHL?

As you can see, at the moment the NHL is refusing to go to the Olympics and cannot find any common ground with the IOC or the IIHF. We’re trying to find out if it would be possible to stage games between the clubs in our leagues. We’re also working with the Champions League. We have a very full calendar, we only have pauses for the Euro Hockey Tour. To take part in the Champions League we would need to create a separate schedule for one or two teams. In addition, we would need to predict how deep into the competition they might go. That would be hard to do.

What positives do you see from allowing players to go out on loan?

Our research showed that we already have a ‘hidden’ loan market. Why have people playing ‘under the table’ if we can create a framework to do it officially? We will bring forward our suggestions, explain how we envisage this system working and how it can help young players waiting for their chance at a top club to get game time elsewhere in the league before returning to the organization that invested in their development.

How do you see the relationship between the KHL and the Russian Hockey Federation?

We’re planning to meet with the FHR to discuss a range of issues. Hopefully we can resolve all these together and work as one.

How did you hear about the chance to become KHL president?

I had a meeting with Gennady Timchenko and Dmitry Chernyshenko and they suggested me for the role. I discussed it with my family and they supported me. My family is something I can always rely on. 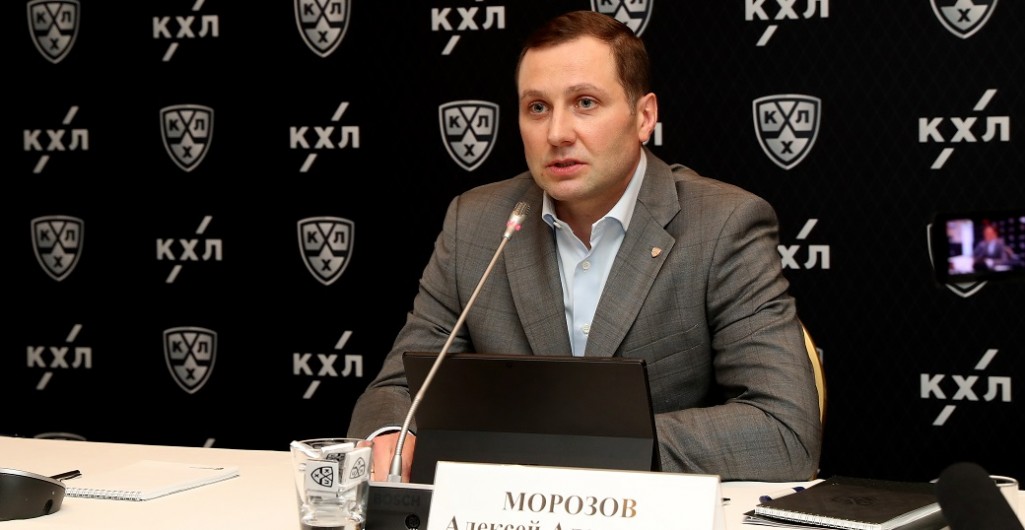 I know Alexei very well as a professional who played in Russia and in the NHL. He captained team Russia; he was a key figure on our country’s principal team. Alexei knows hockey from A to Z. He’s no newcomer to the KHL, he’s been in charge of the Junior Hockey League and he understands very well the league’s development strategy. Alexei has already gained experience and he has the desire to further his professional development. The Russian Hockey Federation has a strong relationship with the KHL and we fully support Alexei Morozov as president.

It’s a big challenge for Alexei. He’s still relatively young for a director and now he has a unique opportunity to bring his knowledge and experience to an interesting and promising project like the KHL. There are several important tasks ahead of him. First and foremost, I’m talking about the need to ensure that our young players remain in Russia and don’t head overseas at a young age. Then there are the issues around the salary cap and the size of the arenas used in the league. In his playing days, Alexei showed that he is a man of great character, a true warrior. I hope that he can bring those qualities to bear as we continue to implement the development strategy that we began a few years ago.

Alexei Morozov is a hockey man in the truest sense. I’m sure that he will cope admirably with this great responsibility. Wherever possible, we will help. The main thing is that Alexei is ambitious, he understands perfectly well what needs to be done. And, by no means the least important factor, he is a genuine authority in the hockey world. He’s played in the KHL, the NHL, he knows very well how the hockey environment works. As for his first steps, let’s wait and see. I’m sure we will see and hear plenty from Alexei in the near future.