June brings a new series, delving into the archives to bring the leading KHL players from the different countries that have contributed to the league since 2008. And where better to start than Canada, the game’s spiritual homeland. Many believe that bringing North American players to Russia is a gamble — but this constellation of stars proves that it can be a big win. Here are the best Canadian performers in a single season.

Most wins in one season

He’s the longest-serving North American goalie in the KHL, and has the most career wins, so it’s no surprise that Michael Garnett claims the most successful season for a Canadian netminder. In 2011-2012, he had 29 wins as Traktor finished top of the table in regular season. It was Garnett’s first season in Chelyabinsk, but he was already very experienced in Russian hockey. Aside from that Continental Cup win in 2012, Garnett also played in two Gagarin Cup finals, but lost out against Ak Bars in 2009 while playing for MVD, then fell to Dynamo Moscow in 2013 while still at Traktor.

Garnett’s closest challenger was Ben Scrivens, who led the KHL in 2016-2017 when he backstopped Dinamo Minsk to 28 victories. That was Scrivens’ first season in the league — although he made earlier acquaintance with Minsk when playing for Canada at the 2014 World Championship. It was also Dinamo’s last visit to the playoffs. Scrivens’ form earned him a move to Salavat Yulaev for the 2017-2018 campaign, and also saw him called up for the PyeongChang Olympics where he helped Canada to bronze. He ended his playing career after that season, aged just 31, and is currently Team Manager at the University of Denver in the NCAA. 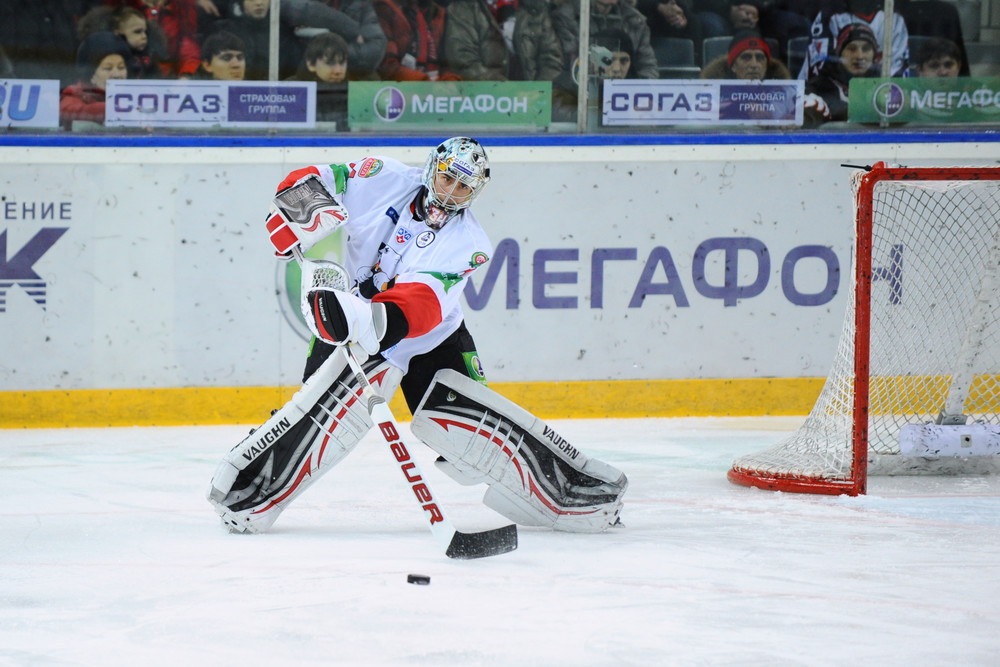 Most shut-outs in one season

Scrivens’ successful campaign in 2016-2017 wasn’t just about leading the KHL in wins. He also set the mark for shut-outs by a Canadian goalie in a single season. Scrivens blanked Dynamo Moscow twice and denied Lokomotiv, Amur, Vityaz, Metallurg Novokuznetsk, Avangard and Jokerit during the season.

Those eight shut-outs beat the previous record of seven set by Curtis Sanford with Lokomotiv back in 2013-2014. Sanford arrived in Yaroslavl as the club returned to KHL action following the 2011 air disaster and played three seasons for the Railwaymen. The best of them came in the middle, with Sanford producing his best stats and helping Loko to the Western Conference final. He retired from playing at the end of 2014-2015 and has been a goalie development consultant for the Utica Comets of the AHL for the last three seasons. 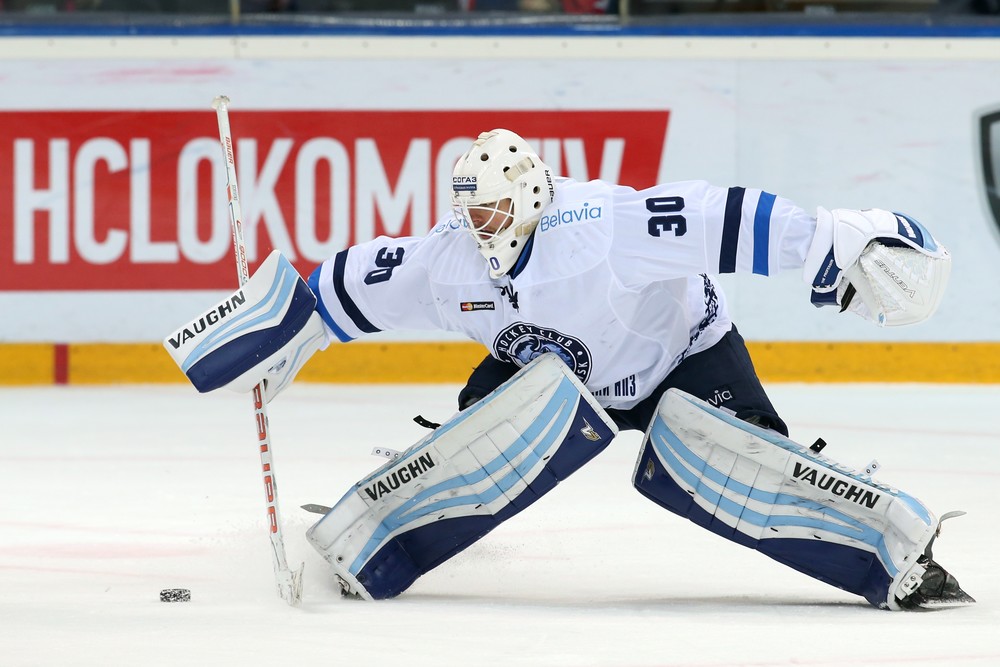 It’s impossible to look beyond Chris Lee and Kevin Dallman when picking out the best Canadian defensemen to feature in the KHL. Lee arrived in Magnitogorsk in 2013-2014 as part of Mike Keenan’s Metallurg revolution and stayed to win two Gagarin Cups and an Olympic bronze medal. More striking, though, after a career that began at a low level in the third division of the NCAA, Lee enjoyed a spectacular late blooming in Russia. When he came to Magnitka, he was just shy of his 33rd birthday, having spent three seasons in Sweden and Germany. But life in the Urals suited him, with two championship seasons and a personal best in 2017 when he compiled a KHL record 65 points from the blue line. That earned him a rare World Championship call-up for Team Canada despite not playing in the NHL, and made him a shoo-in for the Olympic team the following season. Lee hung up his skates in 2018, crowning his career with a bronze medal in PyeongChang.

Dallman, meanwhile, arrived in the KHL right at the start, joining Barys. He liked Kazakhstan so much that he took citizenship, represented the national team and remained at the club until his retirement in 2018-2019 (with a two-year stay at SKA St. Petersburg along the way). All of which made him a legend in Nur-Sultan, where his jersey hangs proudly from the rafters of the Barys Arena. It was a bold step to come to Kazakhstan in the KHL’s first season, but Dallman’s confidence was amply rewarded. He led the KHL in scoring among defensemen in that opening campaign and continued to place among the leaders from then on. He also became an enthusiastic ambassador for the league, his frequent interviews about the positives of playing in Kazakhstan offering a refreshing counterpoint to the complaints voiced by players elsewhere. 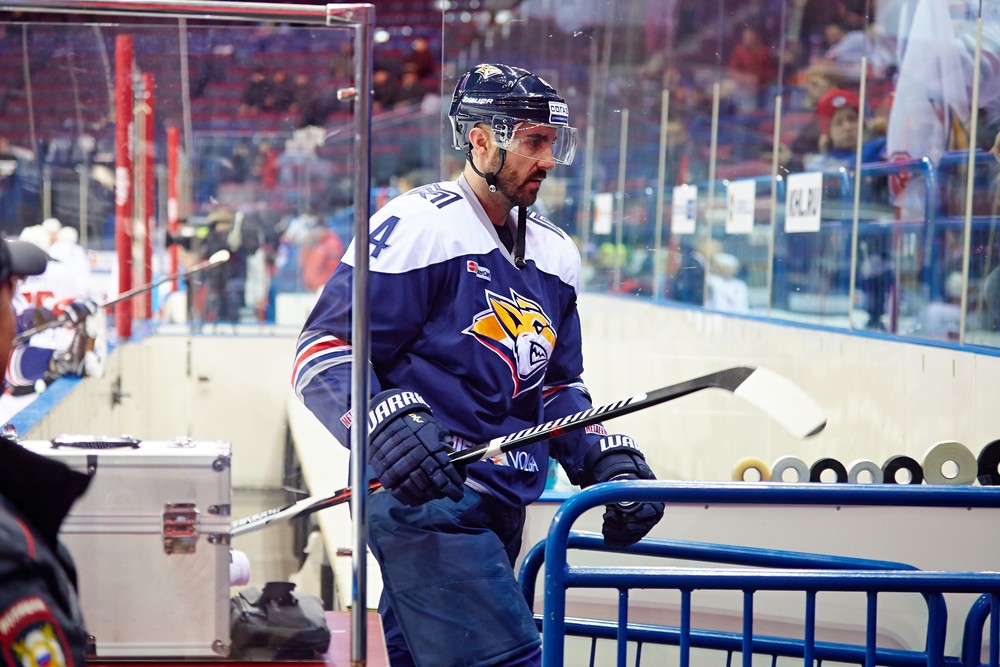 With an explosive shot from the point, it’s no surprise that Dallman leads the way in goals. He set a high standard with 28 tallies in his first season — a total that many forwards would be proud of. His next best return — 18, four seasons later — was good enough for second place on the All-Time list. His closest challengers among Canadian D-men are Chris Lee and Mat Robinson, both of whom achieved 14-goal hauls. 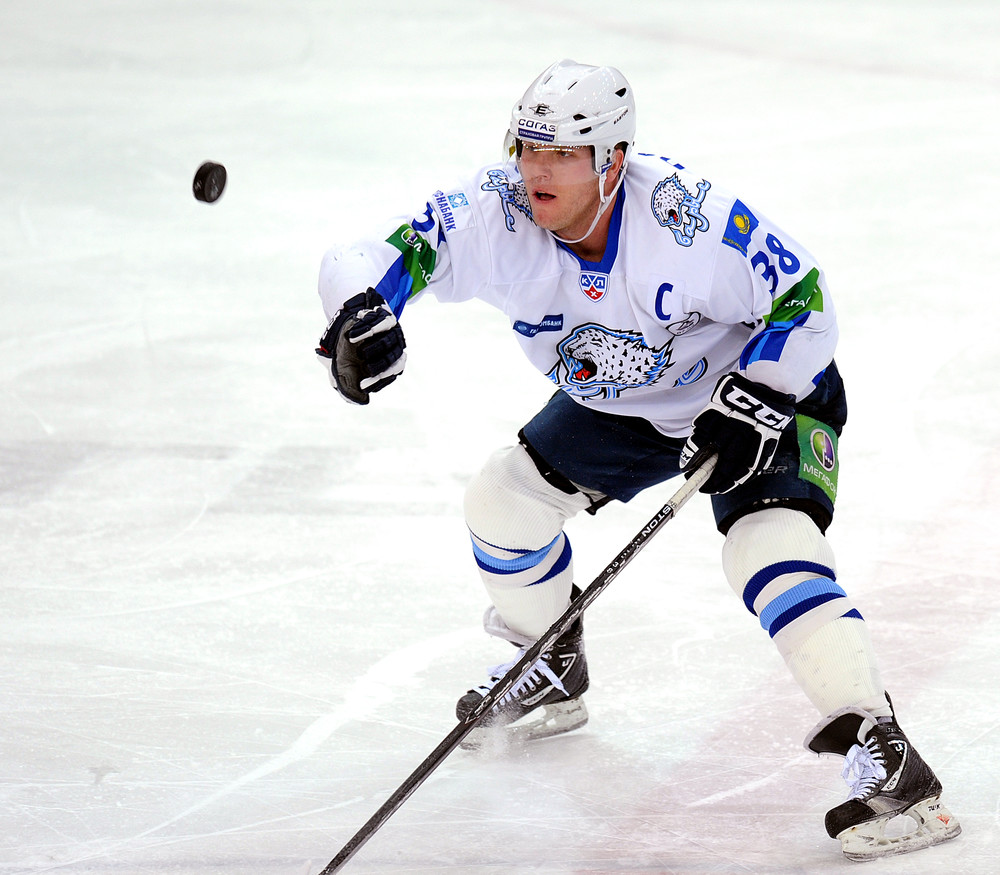 Mat Robinson, much like Chris Lee, is a player who found his hockey home in the KHL. In North America, he never managed more than a handful of AHL games. After coming to Europe, he won a Norwegian title with Sarpsborg before spending two years on a struggling Timra roster in Sweden. But an assured KHL rookie season with Dinamo Riga attracted the attention of Dynamo Moscow and set him on a path that would bring four All-Star calls, an Olympic bronze medal and a long-awaited Gagarin Cup in 2019. Robinson’s best +/- score came this season, beating his previous record of 31 with Dynamo in 2015-2016.

The next Canadian on the list is Ontario native Ray Giroux. A 1994 draft pick for the Flyers, he would suit up 38 times in the NHL for the Islanders and the Devils, but enjoyed his biggest success in Russia. He came to Kazan in 2005-2006 to help Ak Bars win the Superleague before moving to SKA when the KHL was formed. He took part in the inaugural KHL All-Star Game in Red Square in 2009, and the following season saw him produce +28 for SKA. Giroux went on to help Traktor top the regular season table in 2012 and finished his career as alternate captain at Metallurg Novokuznetsk before taking up a coaching role with the Wilkes-Barre / Scranton Junior Knights. 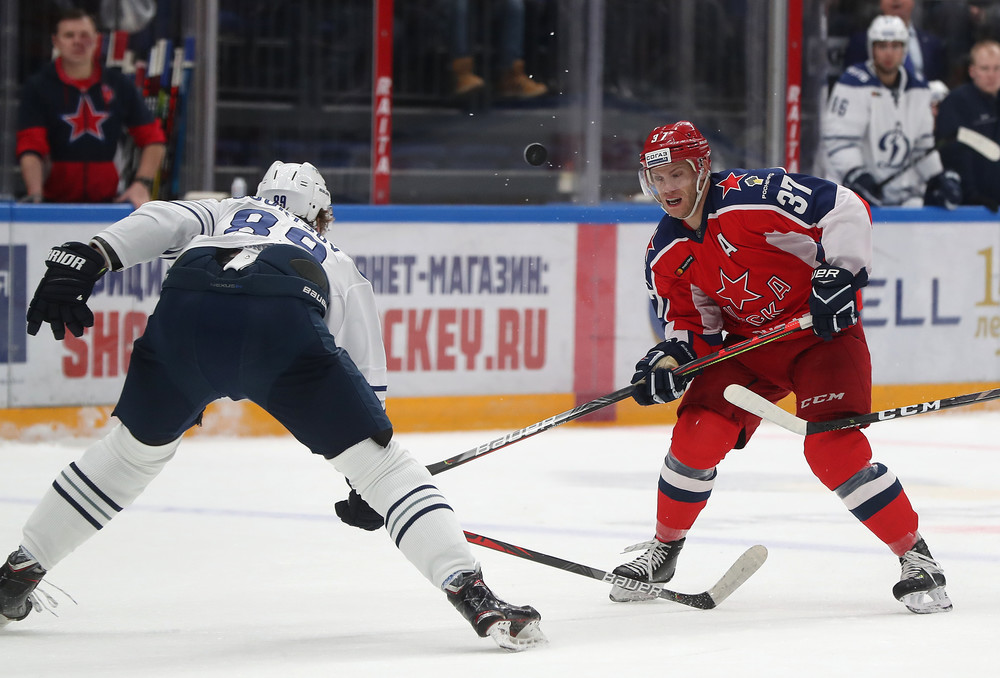 He’s the all-time top scoring import in the KHL and fourth on the list for overall scoring. After nine seasons in the league, Nigel Dawes has secured his status as one of the greats. Like Kevin Dallman, he came to Kazakhstan in search of a new hockey challenge, and like the defenseman he enjoyed himself so much that he ended up taking Kazakh citizenship and playing international hockey for his adopted nation. However, this Winnipeg native’s best season in the league came after he ended a seven-year stint in Astana and joined Avtomobilist. In his first campaign there, he piled up 69 points as the Motormen topped the regular season table in the East. Aged 35, he’s still a potent force with 50 points last season. However, his immediate future is unclear after he opted not to renew his contract in Yekaterinburg.

Dawes also has the second-best return for a Canadian in this league, with 63 points in 2016-2017. The next player to feature on the list is Matt Ellison, one of the stars of Oleg Znarok’s MVD team on its run to the 2019 Gagarin Cup final. Ellison, nicknamed Pushkin for the distinctive beard he wore at that time, also proved to be an enduring classic in Russia: in a career that took in six clubs over 11 seasons, he was always a consistent scorer. His most productive year came in 2014-2015 when he put up 57 points for Dinamo Minsk. 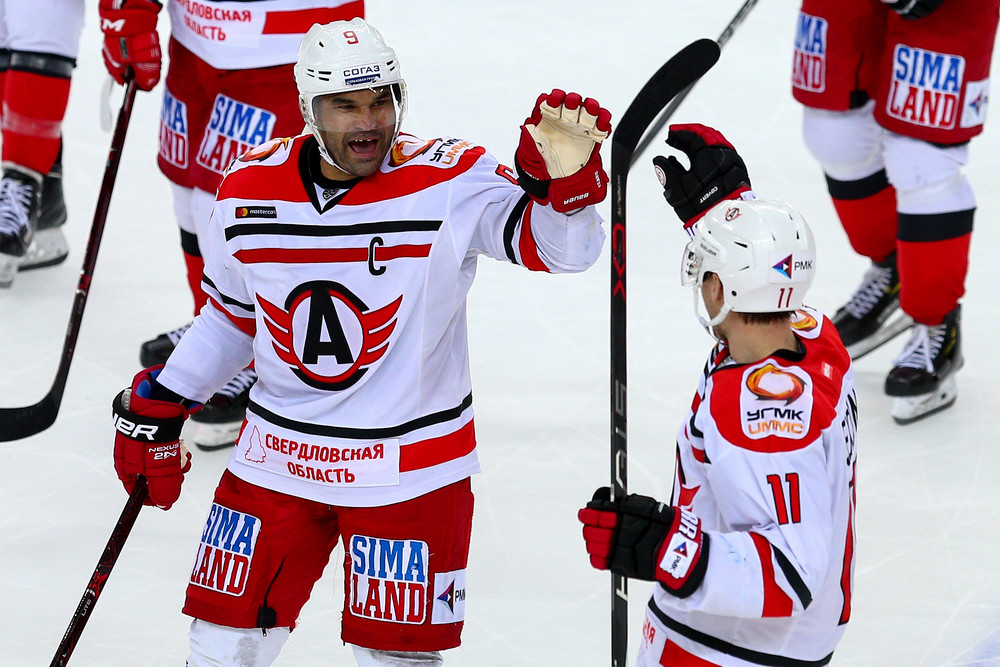 Dawes also leads the way in goals, lighting the red lamp 36 times in his first season as captain of Barys. The following year, he almost matched that feat with 35 tallies in his final campaign in Kazakhstan.

Second place is shared between two players who hit top form with Dinamo Minsk. Ellison potted 26 markers in his second season in Belarus, matching the tally of Geoff Platt in 2009-2010. Platt, something of a pocket dynamo with a flair for the spectacular, settled well in Minsk and took Belarusian citizenship in time to represent the country when it hosted the 2014 World Championship. Platt left Dinamo just before Ellison arrived, but he later played alongside Dawes at Avtomobilist. 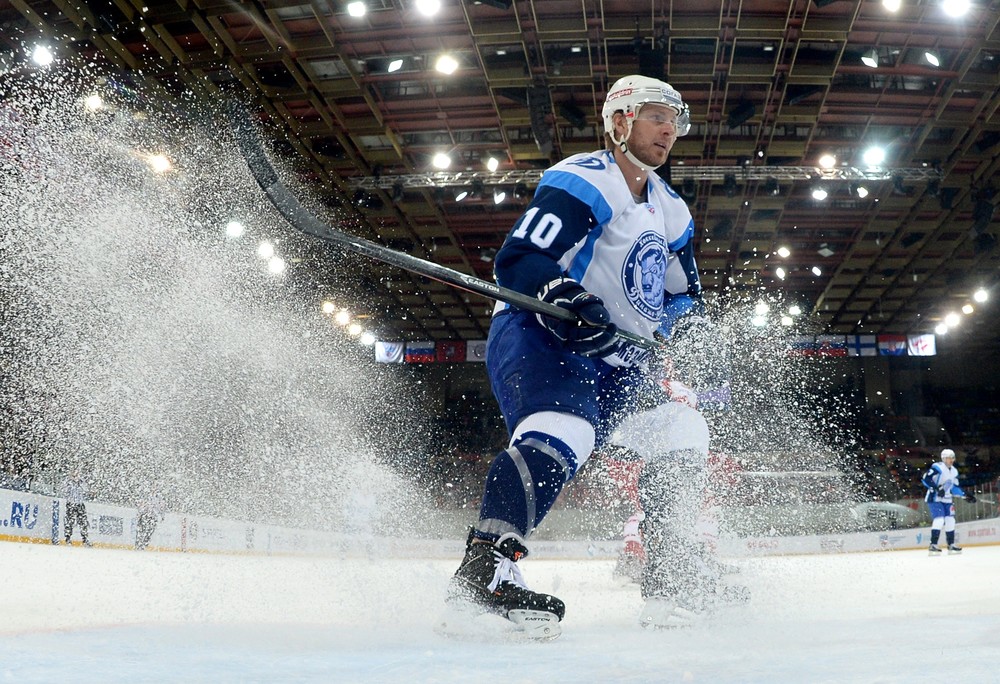 Most assists in one season

When Dawes decided to move to Avtomobilist, it was one of the talking points of the summer of 2018. After so long as an institution in Kazakhstan, the decision to change direction was a bold one. Like Barys, Avto was a team looking to disrupt the traditional powerhouses of the East and it found a forward in Dawes who could move the team up a level. His 41 assists in 2018-2019, part of the best ever points tally for a Canadian in the KHL, set another record for an individual season.

Justin Azevedo first made a name for himself in the KHL when he starred for Lev Prague on its run to the 2014 Gagarin Cup final. That brought him a move to Ak Bars, and another loss in the final 12 months later. His best regular season tally came in 2015-2016, and his 36 helpers make him the second name on this list. But his biggest moments tend to come in the playoffs and in 2018 it was third time lucky when he got his hands on the trophy after scoring 24 (9+15) in Ak Bars’ winning run.

For the purposes of this series, players who took a second nationality after moving to the KHL are counted according to their nationality when they first joined the league. 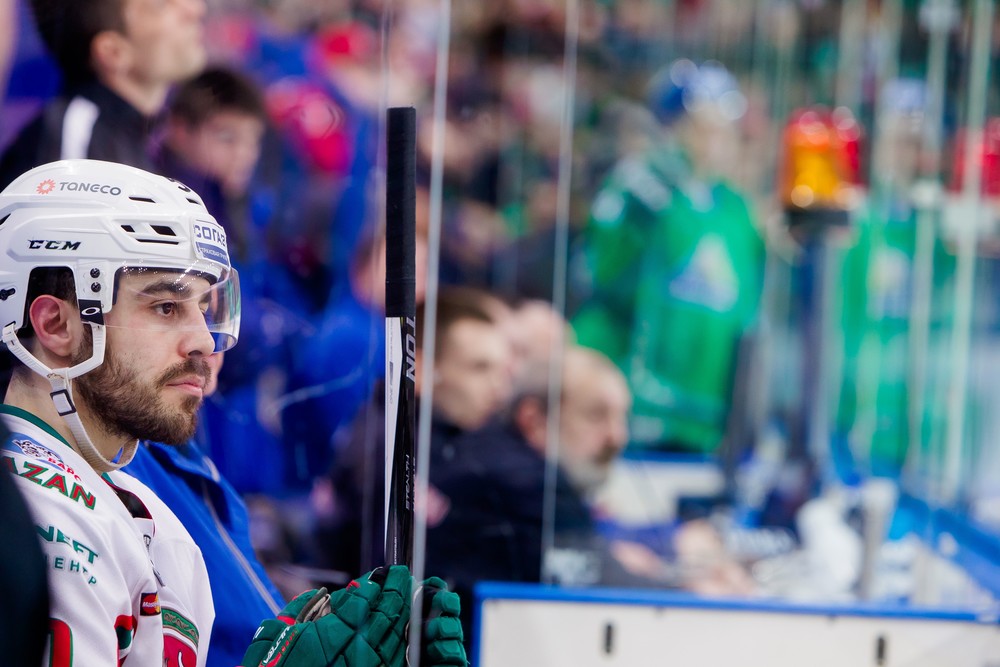