June brings a new series, delving into the archives to bring the leading KHL players from the different countries that have contributed to the league since 2008. Today, the talk is about the United States. Let’s discover the best single-season performance among players who represent the Stars and Stripes.

Most wins in one season

A rare case of an NHL starting goalie who moves to Europe at a relatively young age, Esche played his first year in Russia even before the KHL was established. In the KHL inaugural season, Esche played for SKA, where he had a 19-win campaign and a rare starting position at the 2008 IIHF World Championship. In the next year, he had a record-breaking 29-win campaign and 9 shutouts. At the dawn of the KHL, however, SKA wasn’t a powerhouse, and Esche’s strong regular seasons never translated into deep playoff runs. After two seasons on the Neva’s shores, Esche played a season with Dinamo Minsk, just to retire the next year after spending 2011-2012 in Switzerland. Currently, Esche is a president for AHL’s Utica Comets.

Zapolski spent six years in Finland — three of them with Jokerit in the KHL. In the Finn capital, he had a breakthrough season in 2017-2018, where he also started on goal for the US at the South Korea Olympics. However, Zapolski’s career in the KHL was cut short due to his inconsistency. In his last season in the Finn capital, he lost the starting goalie position to Latvian Janis Kalnins, then signed with Vienna Capitals in the Austrian league. He is currently seeking a team for the upcoming 2020-2021 season. 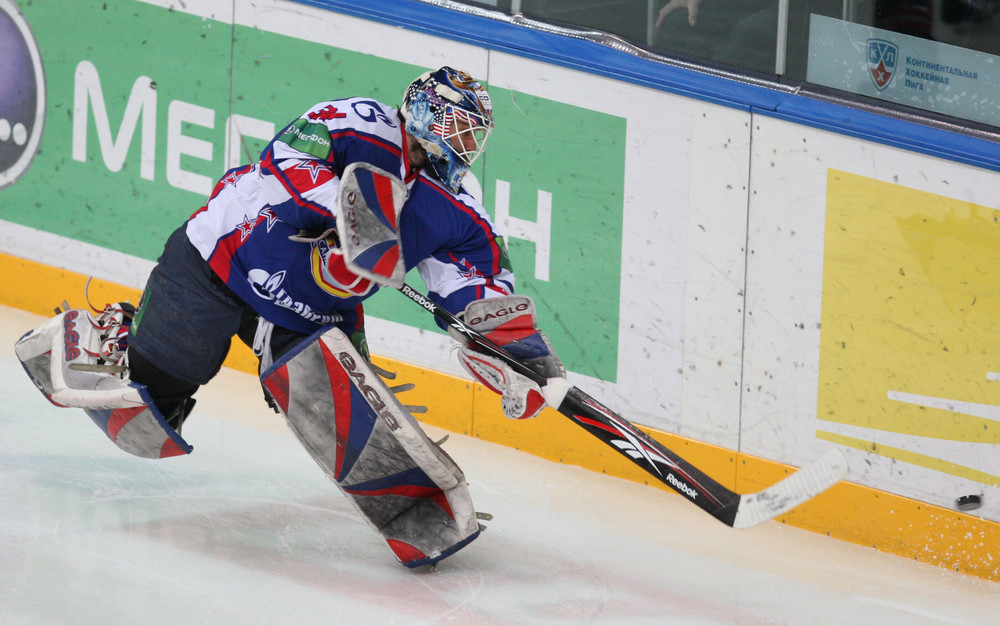 Most shutouts in one season

American goaltenders are a rarity in the KHL, but some achieved excellent results in the league. Other than Esche and Zapolski, Chris Holt was a hot commodity in the first seasons of the league. The native of Vancouver, Canada, who represented the US at the 2003 U18 WJC, was excellent for two seasons in Riga, posting five shutouts and 20 wins in the 2011-2012 campaign. The towering goalie, who is also remembered in Riga for his music skills, played perhaps his best game in Jan. 2012, when he blanked Dynamo Moscow at home in front of a packed Arena Riga as Janis Sprukts scored the game’s lone goal. He made the KHL All-Star Game that year. Holt’s next venture in the KHL was less successful, then he quickly fell off the radar to retire in 2016. 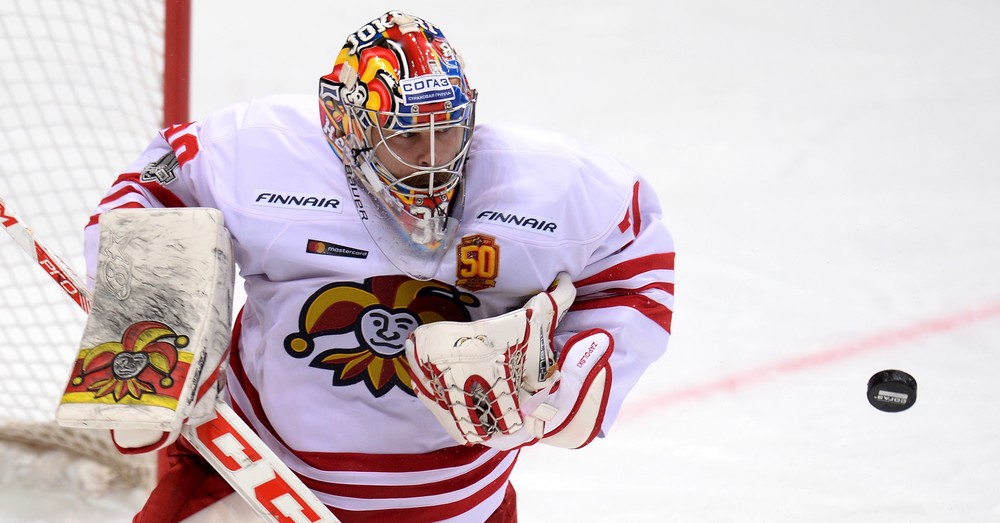 A consummate veteran with plenty of experience in the NHL with the Tampa Bay Lightning, Lundin had his first and best stint in the KHL with Barys. In Kazakhstan, the native of Minnesota played three strong seasons, reaching his peak in the 2014-2015 campaign, when he scored 39 points for the Kazakh franchise. After his fantastic season with Barys, he had another great show the next year, then moved to Switzerland. After one season on the Alps, Lundin returned to the KHL, signing with Jokerit, but failed to get on the scoresheet. After his disappointing stint in Helsinki, he retired in 2018.

In the same period, another offensive D-man from the US — who oddly enough, also played for the Lightning at home — would often appear on the scoresheet. Matt Gilroy had four productive seasons in the KHL, with the best being the 2016-2017 campaign with Spartak Moscow. After scoring 38 points — the most among all the Red-and-Whites players that year — Gilroy moved to Jokerit. He played very well again and represented the US at the 2018 Olympic Games in South Korea. After a further appearance in Switzerland, Gilroy retired. 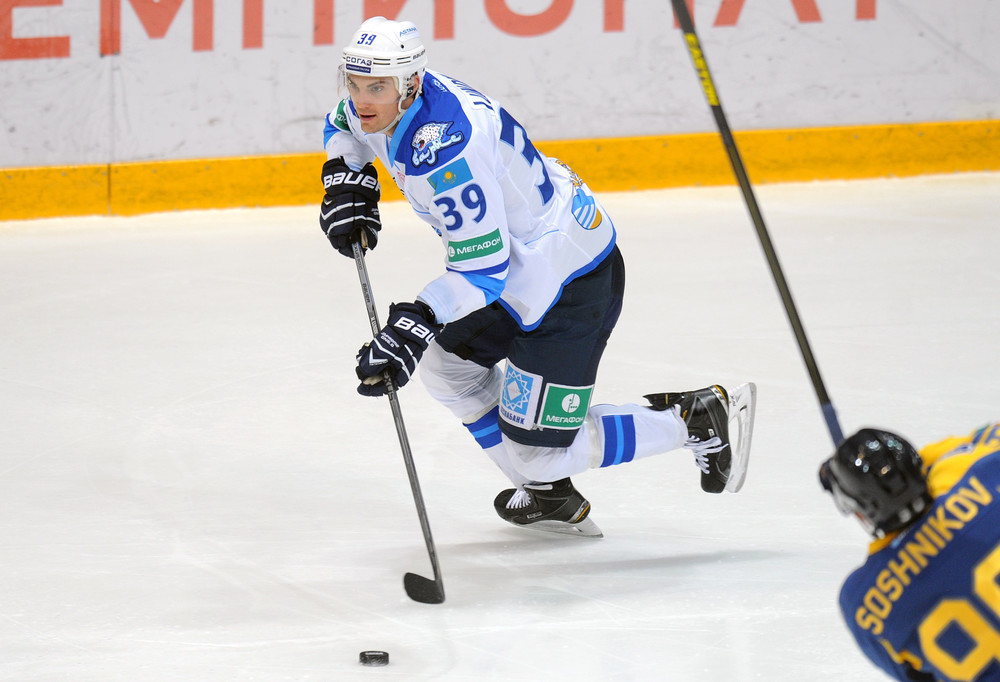 When the talk is about goalscoring, there’s an undisputed champion among American defensemen — Deron Quint. The New Hampshire D-man scored 21 goals in 2010-2011 — only Kevin Dallman can boast more goals than him among defensemen, but also sits in second and fourth place for single-season goals scored. Quint was a force for Traktor, and had a strong impact also in Moscow, especially with Spartak. After seven high-productive seasons in the KHL, Quint returned to Germany for a last season, then retired in 2017.

Bailen represents Belarus on the international scene but signed in the league as an American player. He managed to score 11 goals three times, the last being in the 2019-2020 season when he only needed 36 games to reach the mark. One of the highest-scoring defensemen in the league, Bailen will line up for Traktor next year. 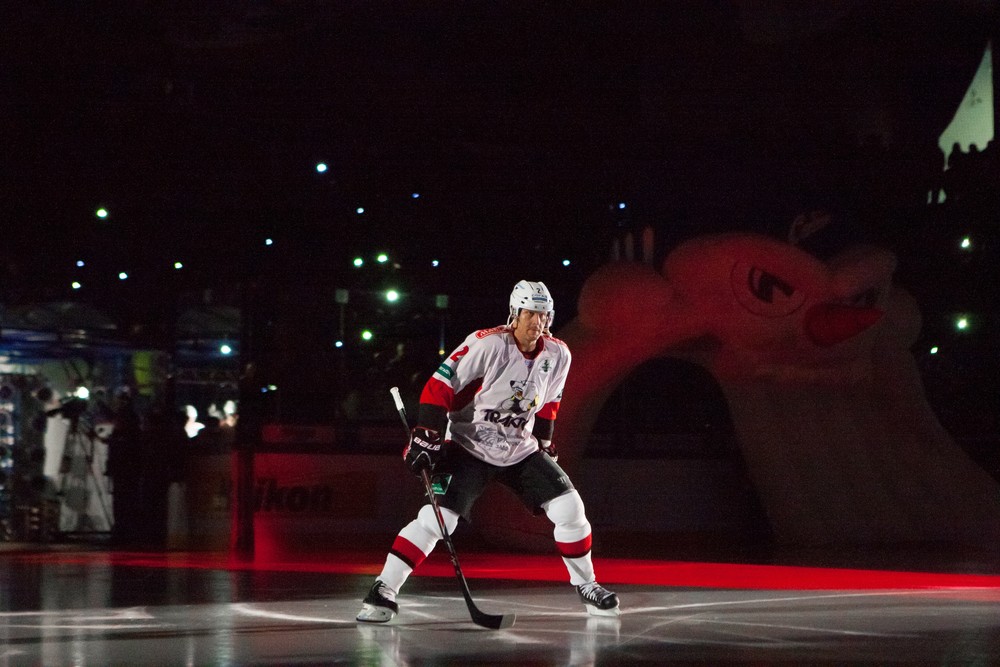 Gilroy is most appreciated as an offensive D-man but was often reliable at both ends of the ice. The best proof was the 2017-18 campaign when he had a solid 27 (7+20) points and an outstanding +20 with the Finnish franchise, second to only Tommi Kivisto’s +22. If that’s not enough, Gilroy led Jokerit with 11 (2+9) points in 9 postseason games.

One of the best players in the Admiral’s history, Jonathon Blum had an incredible first year in the league, with 30 (8+22) points and a +13 rating. However, he failed to keep that pace and was unable to end any other season in the KHL with a positive plus/minus rating. After playing in Vladivostok, Sochi, and Minsk, Blum moved to Sweden, where he is playing today. 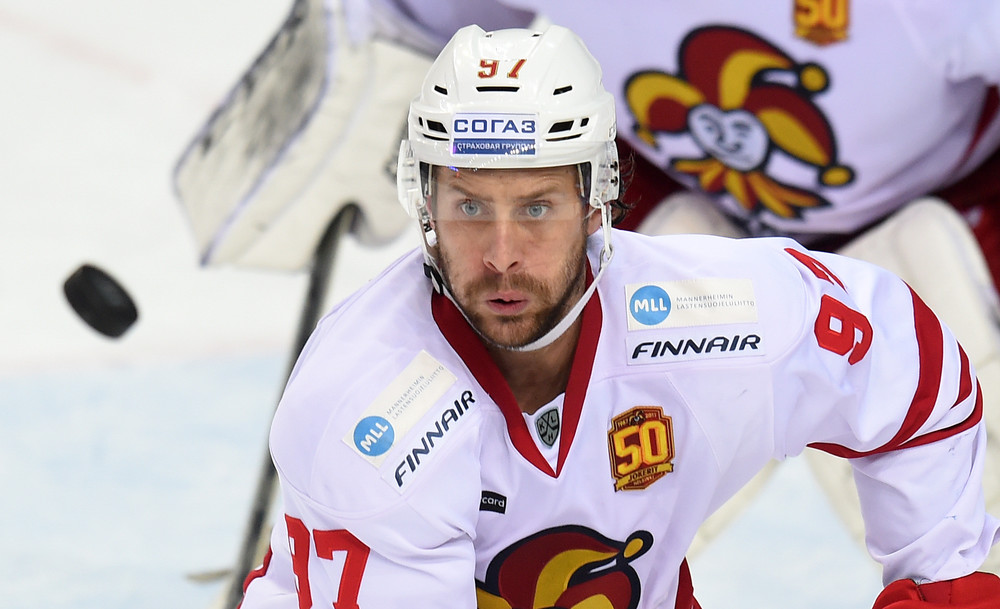 A legend for Barys and the Kazakh national team, Bochenski — similar to Bailen — was hired in the KHL as a US player. However, he will then move on and acquire Kazakhstani citizenship and the right to represent the country on the international scene. Bochenski has an impressive 406 (169+237) points in 412 regular-season games — these numbers put him very high in the all-time KHL scoring leaders. The native of Minnesota missed the 2017-2018 season and retired after having a solid 34 (15+19) points campaign in 2018-2019 with Barys. Recently, Bochenski won the elections and became the new mayor of Grand Forks, North Dakota.

O’Neill doesn’t have the same pace as Bochenski had with Barys, yet he scored a lot, particularly in the last two seasons. In his four seasons with Jokerit, the former Yale University captain reached the playoffs every time and has a solid 172 (62+110) points in 217 regular-season clashes. O’Neill is under contract with Jokerit for a further year. 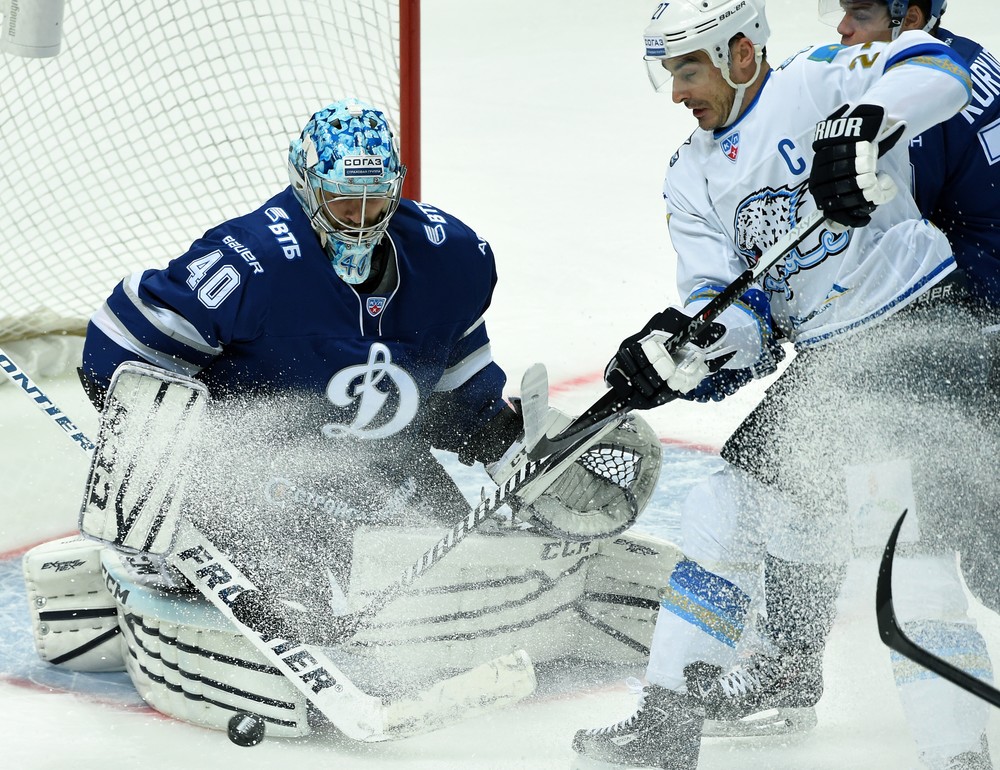 Moses’ 2014-2015 campaign was one of the most exciting in the league’s history. In his third year with Jokerit and the first in the KHL, the American player established a new record for goals — only Sergei Mozyakin will surpass him again two years later, netting 48 pucks for Metallurg. At his prime, Moses was an exciting scorer with speed to burn, and Jokerit was doing all it could to fuel his fantastic wheels to get an advantage in the offensive zone. Moses’s 36-goal campaign was good for a rare call to the IIHF World Championship — an honor that is usually reserved to players lining up for North American teams. For the next year, Steve Moses signed a deal in Switzerland’s National League. 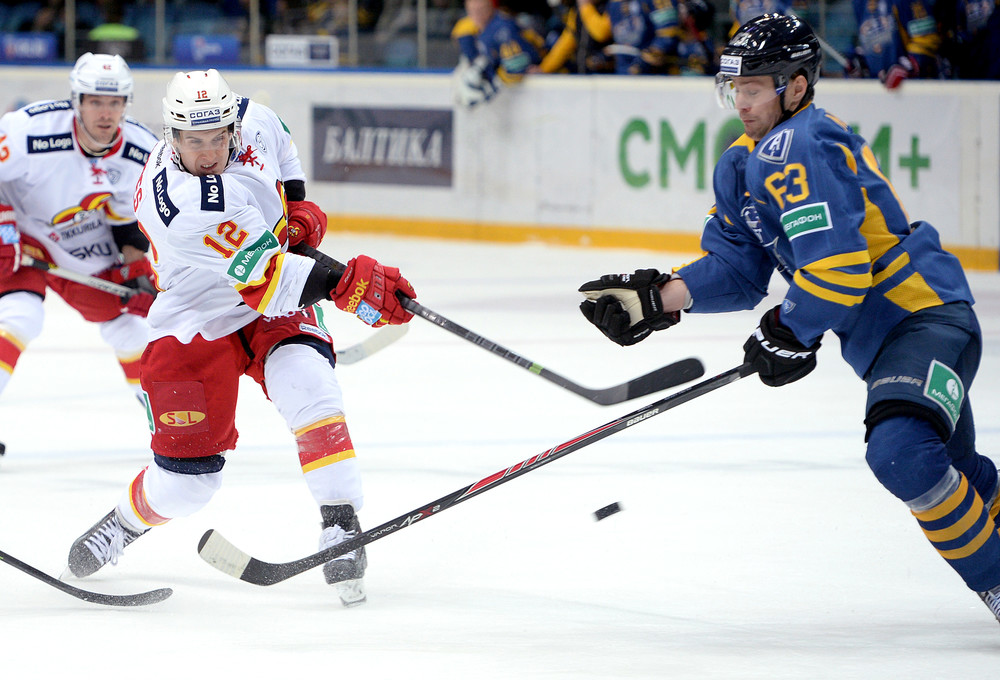 Most assists in one season

O’Neill and Bochenski dominate in the points categories, but Dan Sexton was almost as good, particularly in the 2016-2017 campaign with Neftekhimik Nizhnekamsk. Before moving to Avtomobilist, Sexton dominated the scoresheets scoring 97 (25+42) points in two seasons with the Tatarstan franchise. Sexton will line up again for Avtomobilist next year.

For the purposes of this series, players who took a second nationality after moving to the KHL are counted according to their nationality when the first joined the league. 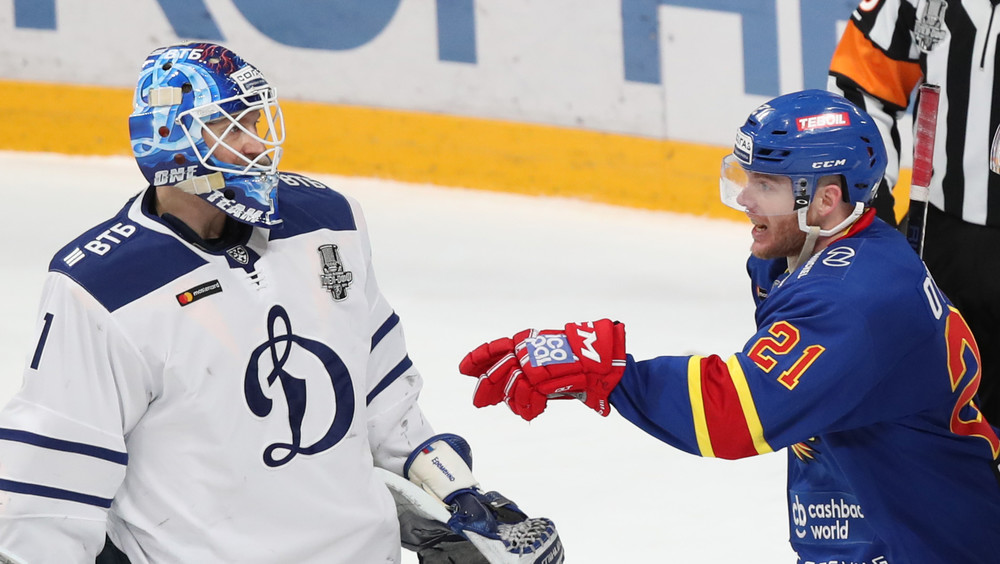