Some of the biggest names in Slovak hockey — Pavol Demitra, Miroslav Satan — have played in the KHL. However, they don’t feature on the list of Slovakia’s All-Time leaders in the KHL. For Satan, his spells with Dynamo Moscow and Slovan Bratislava were late in his illustrious career; for Demitra, tragically, his time at Lokomotiv was cut short after one brilliant season. But Slovakia has contributed many more fine players to the KHL — from Spartak’s contingent in the early years to the Red-and-Whites’ current goalie via several stars who represented Slovan.

Slovak goalies in the KHL include one of the league’s great showmen and the man who backstopped the 2002 World Championship winners. But the list starts with Rastislav Stana, a former NHLer who arrived at Severstal during the first KHL season — despite suggestions that the league would limit game time for import goalies — and stayed for six campaigns. Stana led a surge of Slovaks in the early days of the KHL, when the country was the fourth biggest supplier of imports to the competition.

However, where once Slovakia sent plenty of talent to the KHL, today their numbers are greatly diminished. Stana, whose current role sees him working with the goalies for Slovakia’s U20s, fears that hockey in his homeland is in danger of being marginalized. “At the start of the 21st century, hockey was the most popular sport in Slovakia,” he told KHL.ru in December. “When we won the World Championship, the country celebrated all summer long. But over time, hockey has become a game for rich people and there are fewer players now.”

But there is hope. “I can’t fail to mention Miroslav Satan,” Stana added. “After the end of his playing career, he has become a real leader for Slovak hockey. As president of the national federation, he’s been phoning around the stars of the past to ask them if they’d like to help our hockey today. We’re trying to get kids back into the game, to help them get the kit they need. We’ve got some big names working on this, star players who everyone knows, and it’s easier for them to get the kids’ attention.” 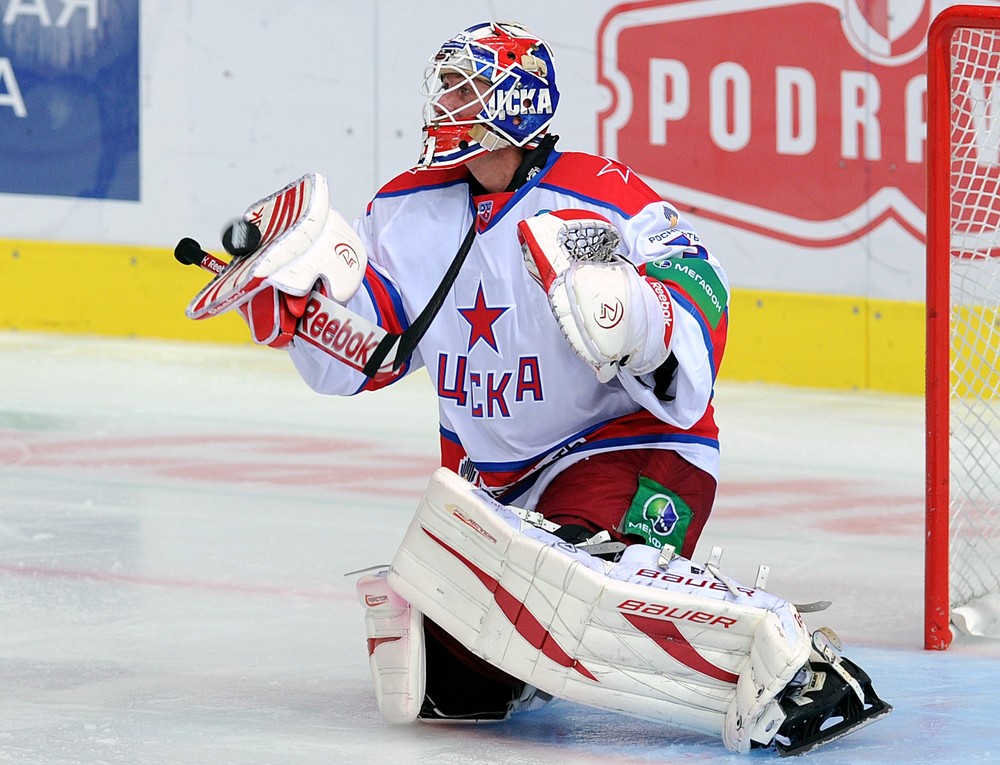 Stana’s closest challenger on the list, at present, is Jan Laco. For many in world hockey, the Sochi Olympics was the first time anyone got to hear about this Liptovsky Mikulas native when he was selected ahead of Peter Budaj. That was reward for his efforts with Donbass Donetsk. When the Ukrainian team dropped out of the KHL at the end of the 2014 playoffs, Laco had a chance of a move to the NHL but opted to stay over here and joined Barys. His stats weren’t always eye-catching, but looking deeper than the numbers revealed a goalie stopping a huge number of shots and remaining in the same percentile as the netminders at the top clubs in the league.

However, it’s likely that Laco will be overtaken by Julius Hudacek in the coming season. The Spartak goalie is back for another year and is currently just 17 games and three wins behind Laco. Overtaking his compatriot might be cause for another edition of the ‘Huda-show’, the post-game celebrations that have cemented the goalie’s reputation as one of the entertainers of the KHL. For him, it’s all about giving something back to the fans — especially after grinding out a tight win. “One time I thought up something with the team mascots, to have a shoot-out after the game,” he told KHL.ru. “It turned out to be just what we needed. The game finished 1-0, so the fans didn’t get to see a lot of goals. I wanted to give them a couple more, but in the end I could only score one from three attempts. But there’s always next time, I always try to have something new.”

The top five is rounded out by a young prospect and a World Champion. Jaroslav Janus came into the league as a promising 22-year-old at Slovan when the Bratislava club joined the KHL in 2012. He took on the bulk of the goaltending duties as Slovan reached the playoffs in its debut season but saw his numbers dip in the second campaign. Midway through his third year he moved to Sparta Prague and has remained in the Czech League ever since. He celebrated his 30th birthday last season while playing with Litvinov. Jan Lasak, a World Champion in 2002, completes the list. He was attracted back to Russia — previously he played in the Super League with SKA — after the KHL started and had a half season with Atlant in 2010. After a year at pre-KHL Jokerit, he returned for two more campaigns and played for Amur and Spartak. 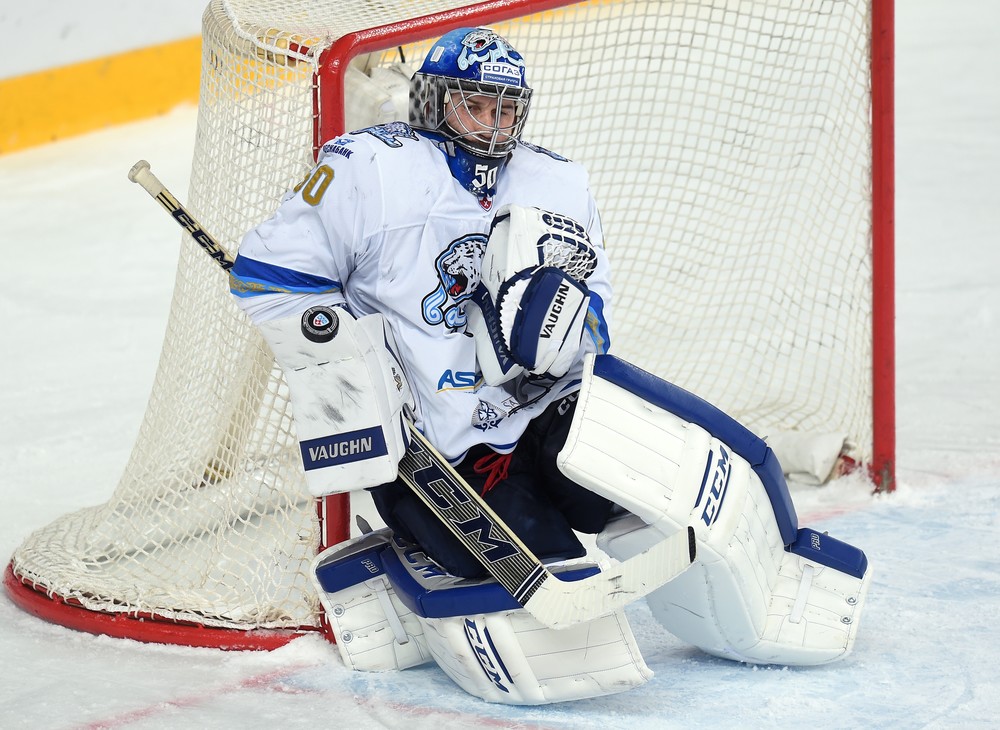 There’s little doubt about the ‘iron man’ of Slovak players in the KHL. Defenseman Tomas Starosta rarely hit the headlines for his scoring prowess, but he was in the league from day one and continued until 2017 — 425 games later. Along the way, he was part of Salavat Yulaev’s Gagarin Cup winning team of 2011, earned himself a place on Ugra’s KHL ‘dream team’ according to the club’s fans and represented Slovakia at the 2018 Olympics — helping Craig Ramsay’s team begin with a victory over the eventual gold medallists from Russia. He also played six seasons for Neftekhimik — four of them prior to the KHL — and was chosen as part of the Nizhnekamsk ‘dream team’ alongside Damir Sharipzyanov.

While Starosta leads the way for appearances, Peter Podhradsky tops the scoring among Slovak blue-liners. Widely travelled in the league, he impressed early on at Torpedo and was part of a Donbass team that looked to be evolving into a contender before the war in Eastern Ukraine destroyed it. That led Podhradsky to Lada at the end of his time in the KHL — a career that left him reflecting on the differences between European and North American hockey.

“The two are different like soccer and American Football,” he told championat.com. “I’m not even kidding. That’s why most Europeans who go over there find that it doesn’t work out for them. They’ve learned to play completely differently. So if you don’t get straight into the NHL, where there are more Europeans, you end up in the AHL or another league and it’s tough to progress from there.” 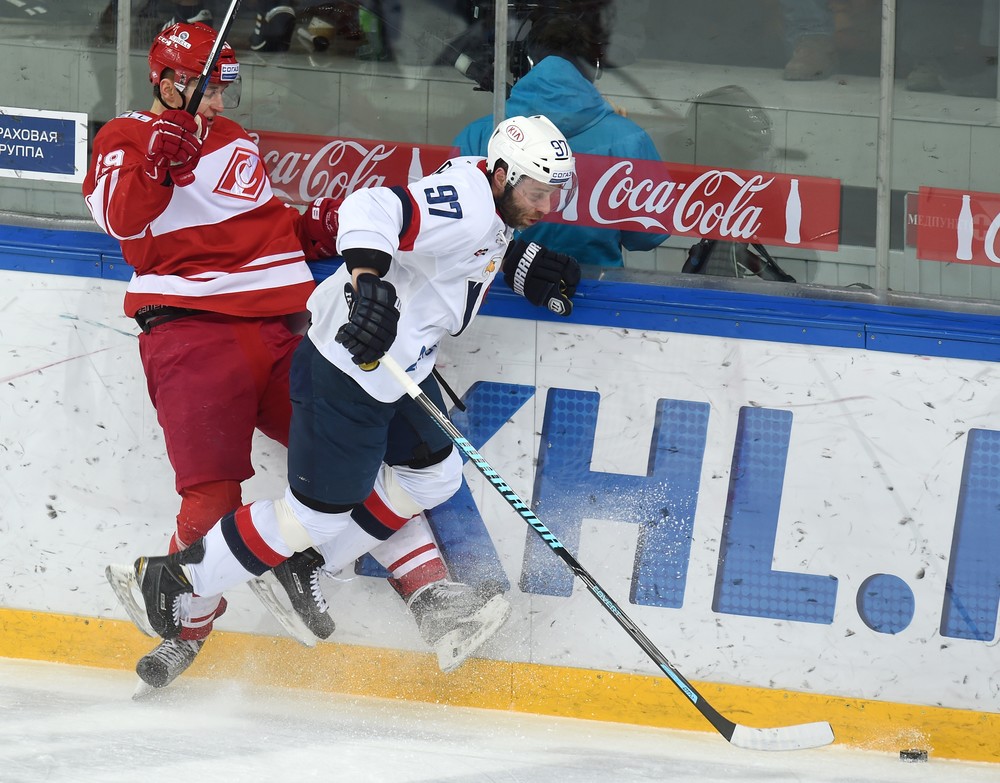 Among Podhradsky’s scoring rivals we see two players with Spartak connections. Ivan Baranka, another member of that Slovak Olympic team in Korea, had four productive seasons there before going on to play in Ufa, Omsk and Bratislava. And, proving that what goes around, comes around, he was discussing the optimal size of a hockey rink some years before the KHL started weighing up regulations about ‘European’, ‘Canadian’ or ‘Finnish’ proportions. Back in 2010, IIHF president Rene Fasel suggested using the ‘Finnish’ ice at the Sochi Olympics — something that left Baranka doubtful.

“Running back and forth, playing on one size rink then another, is hard work,” Baranka told Sport Express at the time. “It would be good if the bosses thought carefully before making these decisions. If we have to play the Olympics on smaller ice, it would be good to see rinks of that size in Russia. The two sizes we have already make a lot of little differences to the game; if we add another size it might cause utter confusion.” In the event, the Sochi games went ahead on European ice, but the 2019-2020 KHL season saw all three sizes in use at different clubs.

Baranka’s team-mate at Spartak, Jaroslav Obsut, proved to be one of the fastest scoring D-men. He compiled his 94 points in 225 games — an impressive strike rate in his four seasons in the league. Although his first hockey dreams took Obsut to Canada, the rise of the KHL — and Spartak’s Slovak connections — brought him to Russia in 2009. “I played in Sweden for five years but then I wanted something new,” he told Championat.com in 2013. “I knew a lot of guys playing in the KHL, they said that it’s a good set-up, a strong championship. So, I decided to go. My agent suggested Moscow, because there were already Slovaks playing there. There were already four of us that summer.”

The two remaining players on the list, Michal Sersen and Ivan Svarny, both completed more than 300 KHL games. And, in both cases, the bulk of those games came for Slovan. Bratislava’s representative in the KHL was a natural destination for many leading Slovak players during its seven seasons with us and these two were among the longest-serving players at the club. Sersen, 34, is still there, captaining his boyhood team in the Slovak Extraliga. 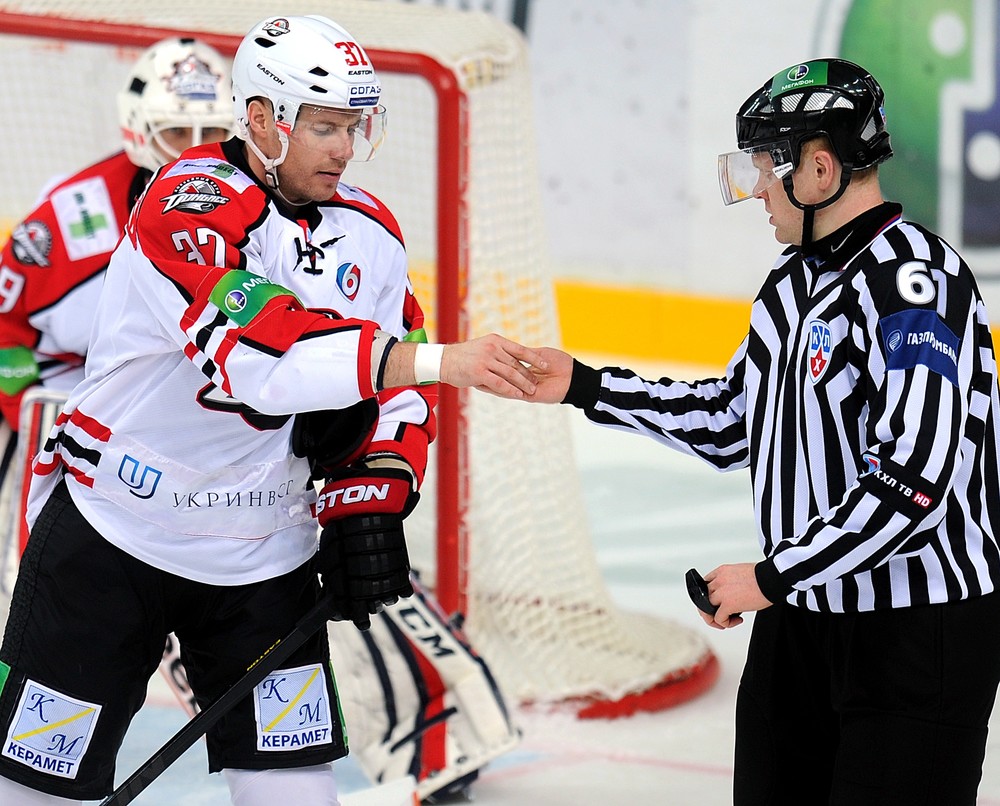 Marcel Hossa is one of the 2020 Hockey Hall of Fame inductees; his brother Marcel holds a similar place in the affections of hockey fans in Riga. Hossa arrived in Riga in the first season of KHL action, having previously played 237 NHL games. He quickly established himself as one of the league’s top forwards, twice going to the All-Star Game in the first two seasons. He moved to Ak Bars, then on to Spartak, where GM Andrei Yakovenko described him as “a goalscorer worth his weight in gold”.

But the lure of Riga was strong: Hossa went back to Latvia, had a year with Lev Prague then returned to the Baltic to finish his KHL career wearing the ‘C’ for Dinamo. And he finished with more games, points and goals than any other Slovak in the league.

While Hossa was starting his KHL career in Riga, Spartak also had a strong Slovak accent. Stefan Ruzicka and Branko Radivojevic formed a key part of the team’s offense and became fan favorites at Sokolniki. The love was mutual. Radivojevic, in particular, continues to follow Spartak’s fortunes closely — even turning up at the Otkrytiye Arena to watch the club’s footballers in action — and after his first year in Moscow he turned down a possible return to the NHL. And in 2012, after his move to Atlant, Radivojevic talked up the level of the KHL’s top teams. “The KHL isn’t going to catch up to the NHL overnight,” he admitted in an interview with Sport Express. “The NHL has 100 years of history and it takes time to get to that level. But Russia has a few teams that are up to the same standards as we see across the Atlantic and could compete there on an even footing — Kazan, Ufa and St. Petersburg, for example.

“I honestly wasn’t interested in going back to the NHL. After my first season at Spartak I had an offer, but I also had everything I needed in Moscow. In particular, I was getting plenty of ice time. It’s better to play in Russia than ride the pine in America.” 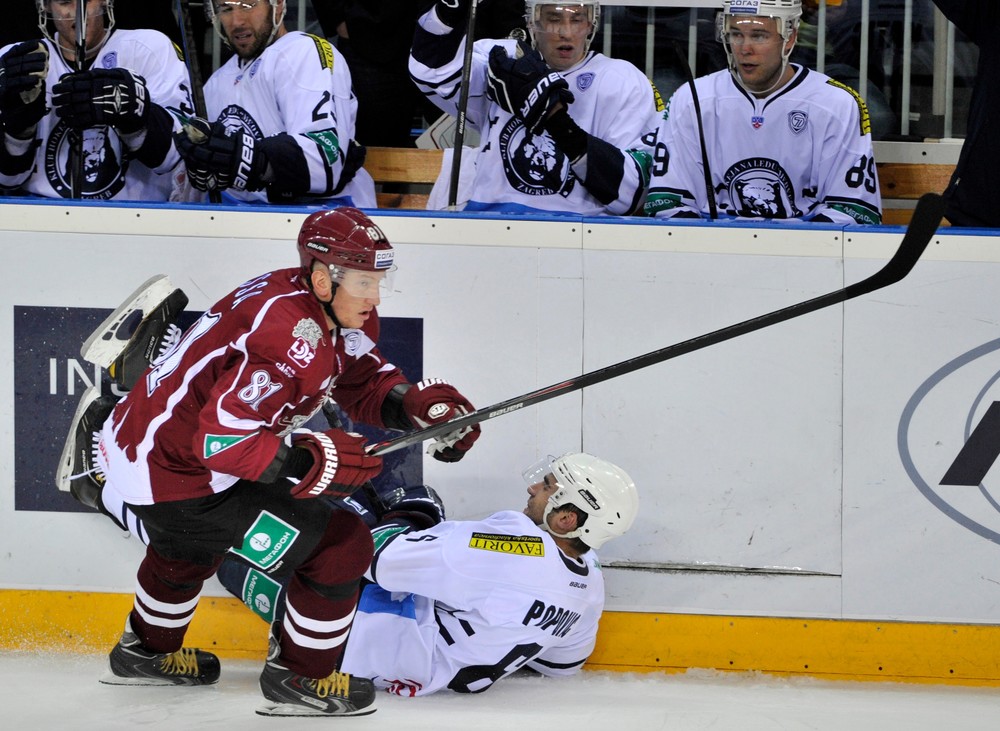 For Ruzicka, who became Spartak’s leading scorer with 177 points in his time at Sokolniki, the Red-and-White connection also influenced his future choice of teams. In 2013 he joined Avangard — and highlighted former Spartak head coach Milos Riha as the key reason for his choice.

Those two outscored Tomas Surovy, the Slovak player with the second highest number of games over seven seasons that took in Riga, Moscow, Minsk Prague and Bratislava. However, he rarely had a chance to play on a strong team and after compiling 32 points after replacing Hossa in Riga, he never enjoyed a similarly successful campaign.

The remaining players on the list all came to the KHL relatively late in their careers. Martin Cibak, a hard-working center, was on the Lightning’s Stanley Cup-winning team of 2004 before he joined the Slovak contingent at Spartak in 2009. Like Surovy, his first season was his best, also scoring 32 points, and he rarely found himself on a competitive team.

Jozef Stumpel, meanwhile, made a big impact at Barys in the league’s early years and, impressively, was still playing last season in his homeland. Meanwhile, Ladislav Nagy, who retired from hockey at last year’s World Championship, is one of the greats of the Slovak game and graced our league in the latter days of his career. 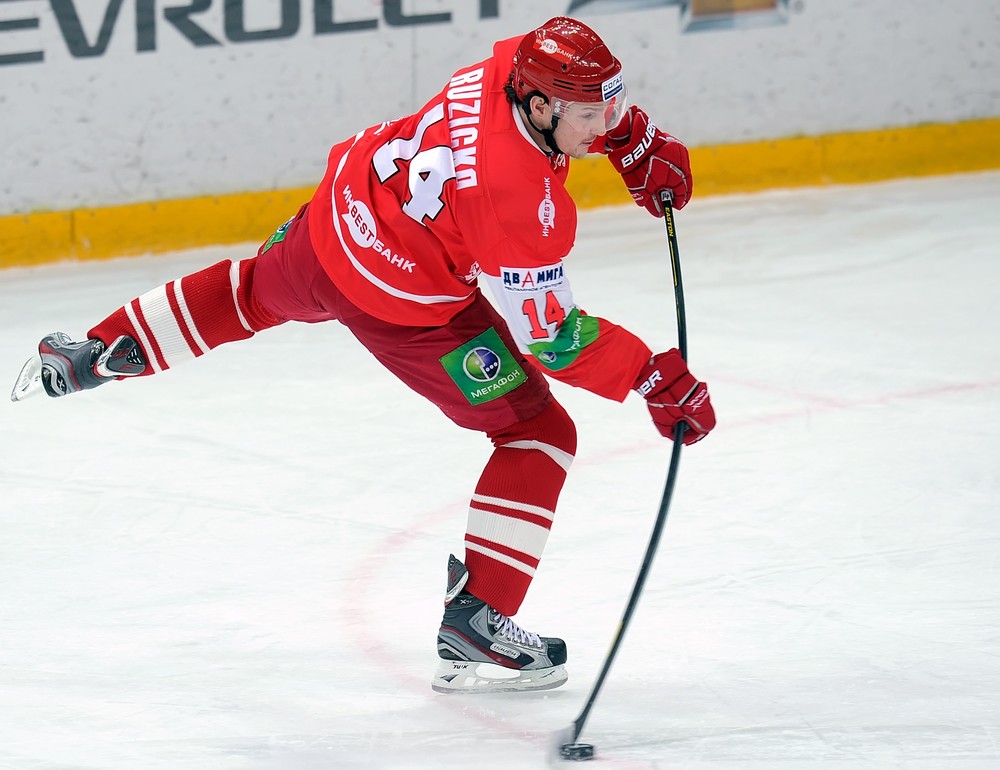