Earlier in this series, we looked at the imports who enjoyed the most productive KHL seasons compared with their compatriots. Today the talk is about the USA. America gave the KHL a lot of top talent, including players who then decided to represent their new countries on the international stage. One of them recently became a mayor in the US.

In the first years of the KHL, not so many goalies were as good as Robert Esche. The American goalie first signed in Russia even before the KHL was established — he signed in 2007 with Ak Bars Kazan. After an impressive campaign in Tatarstan, Esche was picked by SKA as their number one goalie in the KHL inaugural season. In those years, the St. Petersburg franchise didn’t have the same success it has now in the playoffs, but in the regular season, Esche was a force. He won 48 games in just two years, with 15 shutouts. The goalie also represented the USA twice at two consecutive IIHF World Championships, albeit with mixed results. After two seasons on the Neva’s shores, Esche moved to Minsk, where he helped Dinamo reach the playoffs in 2010-2011. The native of Whitesboro, NY, played a year in Switzerland, then retired in 2012. 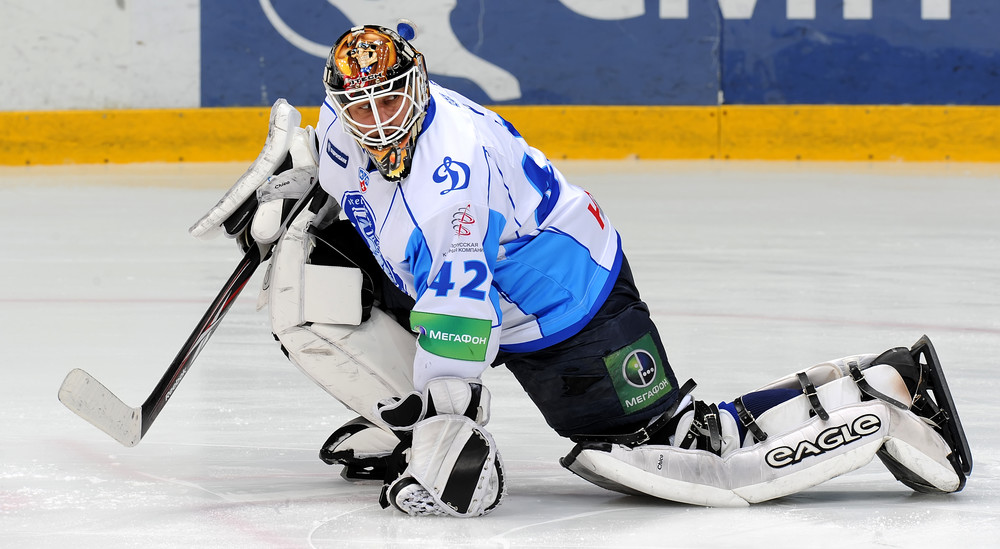 Ryan Zapolski posted similar numbers, representing Jokerit. The native of Erie, PA, was especially good in his first two seasons in Helsinki, where he moved after three years in the Finnish Liiga with Lukko. During his second year with the Jokers, Zapolski represented the US at the 2018 Olympic Games in South Korea. However, after two incredible seasons with Jokerit, Zapolski wasn’t as good in his third campaign and moved to Austria for the 2019-2020 season. Zapolski, who shares with Robert Esche the record for most shutouts in the KHL by an American goalie, is currently a free agent.

Chris Holt is another goalie who shone in the KHL early years. The native of Vancouver, British Columbia, was first hired in the KHL by Dinamo Riga. In the Latvian capital, he will become a massively popular player with the fans, not only because of his strong play between the piping, but also his excellent taste with music. As a starting goalie in Riga, Holt made for a great character and participated in the 2012 KHL All-Star Game in Riga, where he also won the goaltending competition at the pre-game Skills Show. After Riga, Holt was signed by Avtomobilist Yekaterinburg. After 27 games for the Urals franchise, he was traded to Donbass Donetsk for the Ukrainian’s team playoffs push. However, the 2012-2013 season was the last one for Holt in the KHL. After sitting a season, he played in Italy, Czech Republic, and Scotland before retiring in 2016.

No other American goalies played more than a full season in the KHL. However, this is most likely going to change soon as Jeremy Smith will start the upcoming 2020-2021 season with Kunlun Red Star. Last year, he had 11 wins and 3 blanks in 32 games for the Chinese franchise. 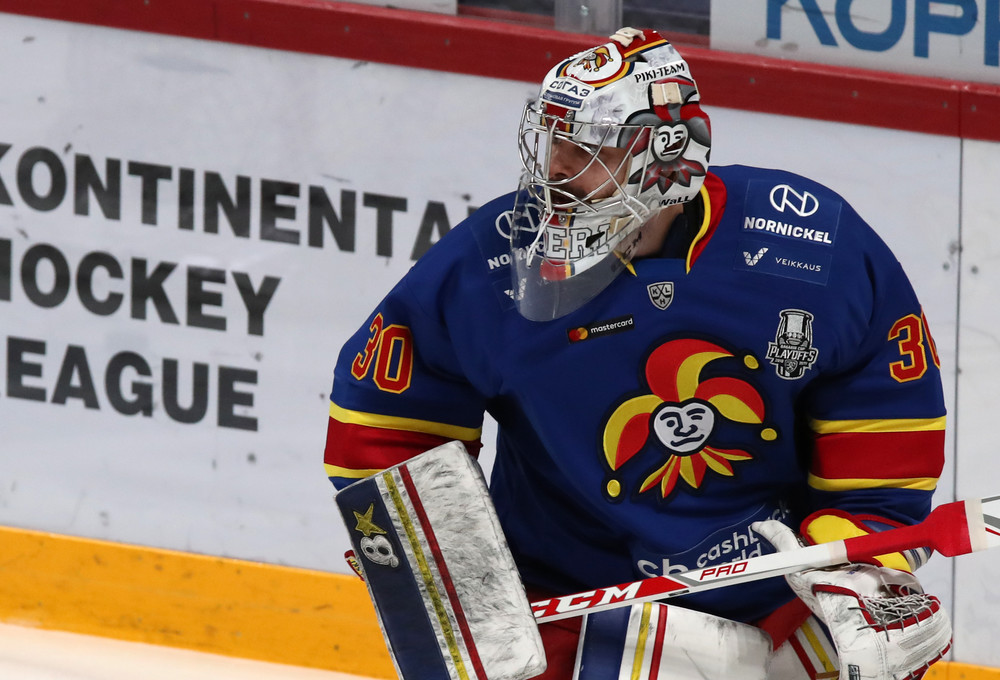 With his 190 points, Quint is still one of the top-scoring American players in the KHL history, including forwards. Quint was first recruited in the KHL by Neftekhimik in 2009 after playing a few seasons in Germany. However, it’s with Traktor that the defenseman will have his best days in his career. He led the league with 21 goals from the blueline in 2010-2011, then helped Traktor reaching the Gagarin Cup finals in 2013. After that memorable playoff run, Quint played a season in Moscow and returned to Chelyabinsk for a further couple of years. He was a KHL All-Star in 2013 and 2014. After captaining Traktor in 2015-2016, he returned to Germany, where he led EHC Munchen to yet another title in his last season in pro hockey. Quint called it a career in 2017. He still holds the record as the oldest player to ever wear the Traktor jersey, playing his last game at more than 39 years old.

After Quint, Traktor got an advantage from another formidable offensive defenseman — Nick Bailen. However, Bailen reached the KHL stardom with another team, Dinamo Minsk. He was so good in the Belarusian capital that he gained citizenship and now represents Belarus on the international stage. In Minsk, Bailen played two and a half seasons, reaching the playoffs only once. After playing out the 2016-2017 season in Sweden, Bailen returned to the KHL with Traktor. He managed to position himself as Quint’s heir, posting impressive numbers and playing a leading role. After scoring 25 (11+14) points in only 36 games last year, Bailen is set to continue with Traktor for the 2020-2021 campaign. 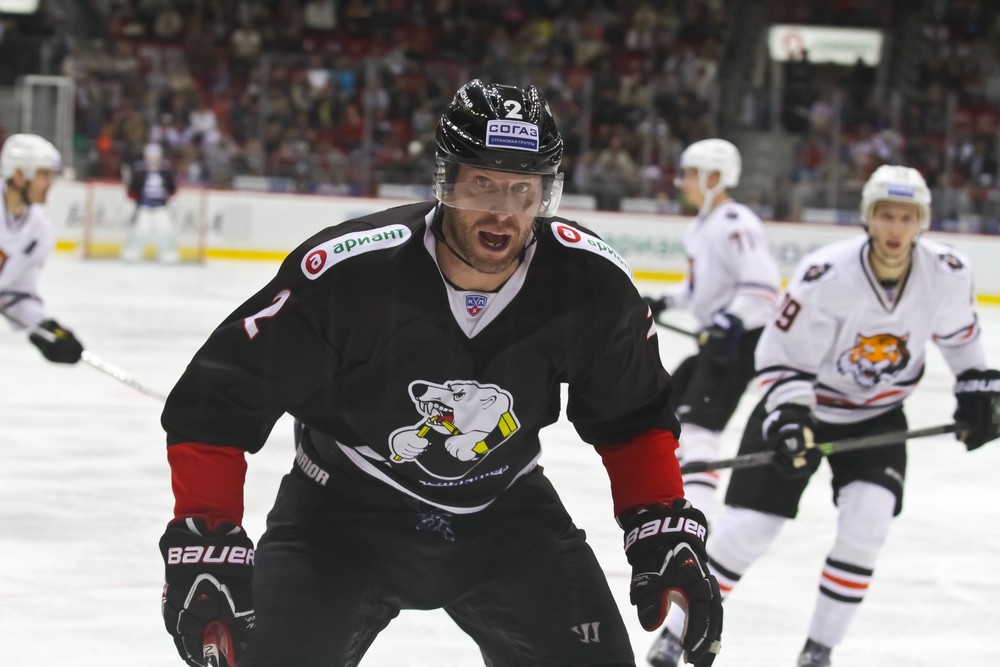 A veteran player with multiple seasons in the NHL under his belt, Matt Gilroy first signed in the KHL with Atlant. In the Moscow Region, he posted a career-high nine goals in his first season, but then had to change team after Atlant folded in 2015. Shortly after, Gilroy signed with Spartak, where he had his career-high 38 (7+31) points in 2016-2017. Despite his great numbers, Gilroy never reached the playoffs. The American defenseman managed to fix this problem moving North and signing with Jokerit for the 2017-2018 campaign. Later in the season, Gilroy also represented the US at the 2018 Olympics, where he was an alternate captain for the Stars and Stripes. After a year in Switzerland, Gilroy retired in 2019.

Minnesota native Clay Wilson was a critical player for Donbass Donetsk between 2012-2014 and one of the most prolific defensemen for the Ukrainian franchise. After two successful seasons in Eastern Ukraine, Wilson signed with HC Sochi. In his first year on the Black Sea shores, he had his career-high with 27 (2+25) points in 60 regular-season games. After a further year in Sochi, Wilson signed with Severstal, but his production dropped to only 13 points. After a year in Sweden and a year off, Wilson returned to Donetsk, where he spent the short-fated 2019-2020 season.

Two-way defenseman Matt Lundin came to the KHL as his second experience in Europe after shortly playing in Sweden in 2012. Maybe that is one of the reasons why he was so successful with Barys since the start. Another Minnesota native, Lundin, came only behind the great Chris Lee in assists by defensemen (33) in the 2014-2015 campaign. He also made the KHL All-Star Game that year. After three fantastic seasons in the Kazakh capital, the veteran defenseman moved to Switzerland. However, he will line up for a further year in the KHL as he joined Jokerit for the 2017-2018 campaign. His second stint in the KHL won’t be as successful as the first attempt — Lundin scored no points in 23 games for the Jokers. After his time in Jokerit, Lundin retired in 2018.

Other American defensemen who had a significant impact on the league were Jonathon Blum, who captained Admiral in 2016-2017, former Stanley Cup champion Andrew Hutchinson, and Ryan Gunderson. 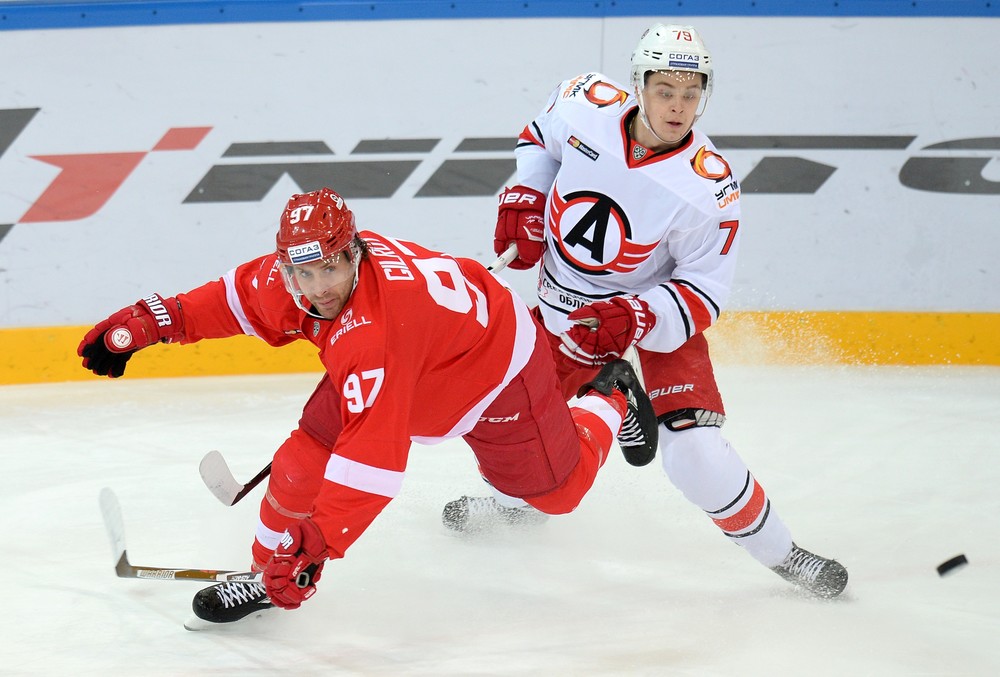 Mayor Bochenski first came to the KHL as an American player and played his first seasons in the league under the US flag. Before winning the mayoral elections in Grand Forks, the Blaine, Minnesota, native was a legend on the ice for Barys and Kazakhstan. One of the top-scoring imports ever (only Nigel Dawes and Matt Ellison scored more than he did), Bochenski spent his whole KHL career in the Kazakh capital. He became so attached to the new reality that he accepted citizenship and started representing Kazakhstan on the international scene. After missing the 2017-2018 season, he returned for a final year with Barys before retiring in 2019. Bochenski’s play, united with Dawes and Dustin Boyd, helped drive hockey’s popularity in Kazakhstan, spreading the sport in different new places across the country.

Dan Sexton follows Bochenski in all statistics, and considering that he is still active in the league, he may climb up the rankings, but beating Bochenski will be hard. Sexton came in the league joining Neftekhimik in 2014, and he had a few spectacular seasons in Tatarstan, winning a trip to the 2015 IIHF World Championship. He later moved to Yekaterinburg in the Ural franchise’s effort to build a team that could compete for the Gagarin Cup title. The move didn’t work out for now for the Motormen, but Sexton kept on scoring at a high pace. He is likely to keep his speed for several years down the road as he’s still relatively young at his 33. 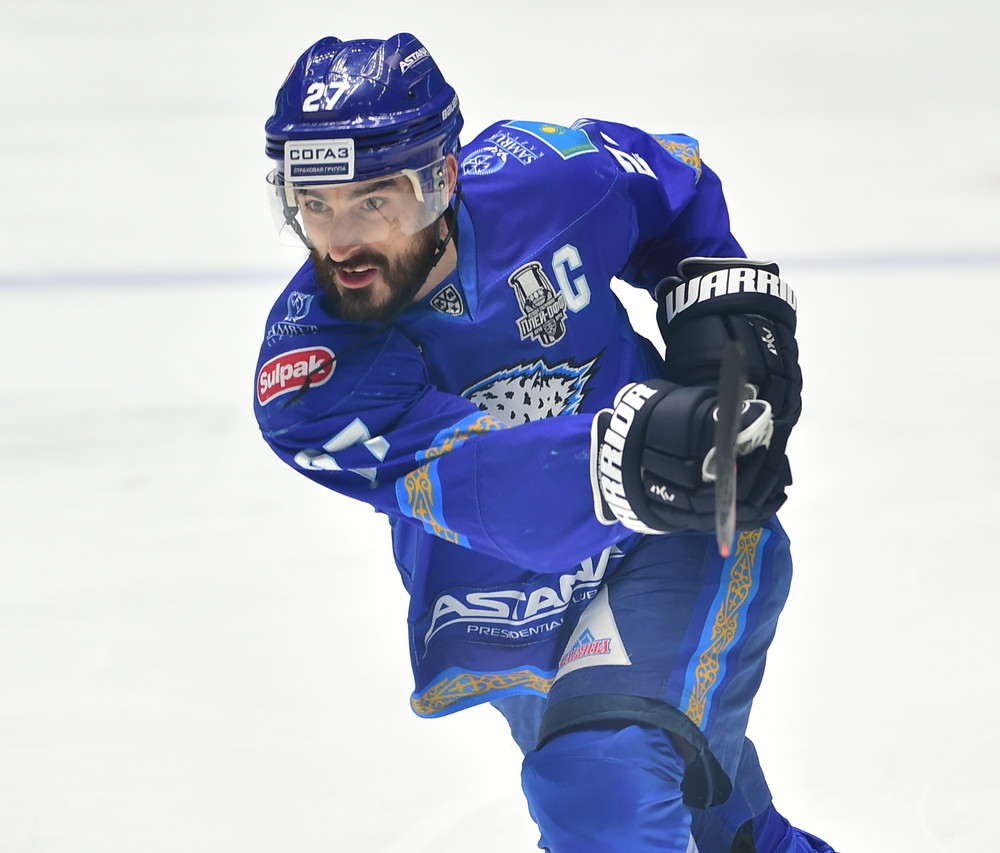 Steve Moses literally took the KHL by the storm when he scored a whopping 36 goals in his debut year with Jokerit. An exciting player with incredible top speed and acceleration, Moses terrified the opposition goalies in the 2014-2015 season, when he seemed to be unstoppable. After that astonishing campaign, he signed in North America, but he failed to make it to the NHL. Back to the KHL, Moses joined SKA, where injuries limited him to a bit more than 50 games in two seasons. After another stint in the AHL, the speedster rejoined Jokerit. However, it looked like the best years were past Moses’ shoulders, who only scored 26 goals in three seasons for the Jokers. He’s recently signed in Switzerland for the 2020-2021 campaign.

Ryan Vesce wasn’t as spectacular as Moses, and his speed wasn’t something that could take the fans off their seats, yet he was a very consistent player with a lot of points in his hands. The native of the New York state lined up for four KHL teams, and only in Traktor he will not succeed, scoring one goal in seven games and leaving the team midway through the season. The former NCAA champion with the Cornell University had a career-high of 48 (25+23) points with Torpedo but never had a deep playoff run with his teams. After the Traktor’s experience, Vesce signed in Switzerland, where he retired in 2018.

A real adept in passing the puck and playmaking, Brian O’Neill always seems able to find his partners on the ice with closed eyes. It was especially true in 2018-2019 when the flamboyant winger compiled a fantastic 45 assists — only Nikita Gusev and Vadim Shipachyov had more than him. Naturally, O’Neill lined up for the US at the 2018 South Korea Olympics. After posting a solid 48-point campaign last year, O’Neill is set to continue with the Jokers for the upcoming 2020-2021 season.

American forwards are a rising trend in the KHL, and other players had good careers in the league’s clubs, even if they couldn’t match the ones of the mentioned players. Ryan Stoa and Tim Stapleton were among those, so was Jeff Taffe — yet another player who started his path in the KHL with Neftekhimik.

For the purposes of this series, players who took a second nationality after moving to the KHL are counted according to their nationality when the first joined the league. 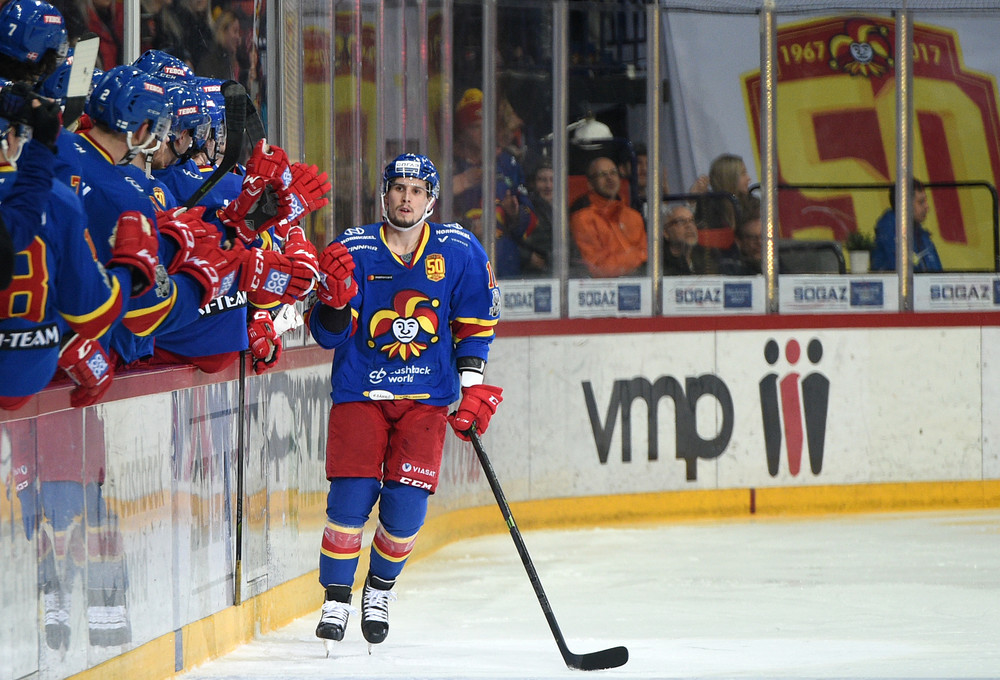