A revenge win and a Gordie Howe hat-trick

Friday’s pre-season action saw the first games between two KHL teams this summer, a revenge win for Russia’s juniors and a high-scoring battle in Minsk.

Golubev makes an impact in Siberia

The first game of the day saw Amur, rocked by the departure of head coach Alexander Gulyavtsev, travel to Sibir. The home team was without big summer signing Eric O’Dell, and also opted to give recent acquisition Stepan Sannikov time to settle after securing his services during the week. The visitor, meanwhile, found a hero in the form of Denis Golubev, who completed a Gordie Howe hat-trick in the third period of a robust encounter.

The first two periods brought no goals, but a steady stream of penalties highlighted that this was no mere exhibition event. Sibir head coach Nikolai Zavarukhin later admitted that his players’ sheer desire to get back into action contribution to some of that indiscipline. Later, it brought the first fight of the summer when Nikita Shashkov dropped with gloves with Golubev in the 52nd minute.

By that stage, Golubev had helped his team to a 3-0 lead. He had no role in the opener, a power play goal from Pavel Turbin early in the third frame. But the forward had a helper as Alexander Gorshkov extended the lead during a 5-on-3 advantage and completed the scoring when his partner returned the favor four minutes later. For the Tigers’ players, this was evidence that life goes on, despite the shock of losing Gulyavtsev; Sibir preferred to focus on the opportunities the game offered to its youngsters, most notably 16-year-old forward Nikita Blednov, who has yet to make his debut in the Junior Hockey League.

In Minsk, Dinamo took on its farm club in its first warm-up game for the coming campaign. Craig Woodcroft’s team needs to improve on last year’s unimpressive showing, but the evidence of this encounter suggests that many familiar problems remain.

On the bright side, Dinamo can score goals. There was also encouragement from young prospect Ivan Drozdov, a star of Yunost Minsk’s Belarusian Championship triumph in the spring, who opened his season with an assist on Dmitry Buinitsky’s opener. A three-goal salvo late in the second period, with Roman Gorbunov, Alexander Pavlovich and Artyom Demkov finding the net, also pointed to a promising future. Gorbunov and Demkov, who played together at Shakhtyor Soligorsk, hinted at a potential partnership for Minsk in the future, with Gorbunov pronouncing himself happy to rekindle a familiar combination.

But there were familiar defensive frailties on view. Starting goalie Dominik Furch, making his Dinamo debut, was beaten twice late in the first period as Molodechno rallied from 0-2 to tie the scores. At this stage in pre-season, the emphasis remains on making day-to-day progress.

Matvey Guskov, son of two-time Russian champion Alexander, scored twice for Russia’s juniors as they got a revenge win over Sochi.

Two days ago, the Leopards powered to a 6-2 success against the youngsters. This time, Alexander Andrievsky gave some of his imports a first taste of the team, with Joel Lassinantti starting in goal and forwards Linus Johansson and Markus Nilsson linking up on the first line. David Rundblad also returned on defense.

However, it was the young Russians who impressed. Yegor Afanasyev scored for the second game running to separate the teams at the first intermission. Amir Gareyev, a potential candidate for World Junior action this season, alerted Igor Larionov and his staff with a tying goal for Sochi but, with Lassinantti replaced by Arseny Akhmetov, the home team was unable to build on that foundation.

Instead it was Guskov, with two third-period tallies, who gave Team Russia the win. The teams will meet again soon when the Sochi Hockey Open starts next week.

The traditional pre-season meeting between these Tatar rivals went the way of Neftekhimik, despite two goals from Stanislav Galiyev for the host. Galiyev got his first chance to play alongside summer signing Stephane Da Costa, and the Frenchman duly marked the occasion with an assist on his new team’s second goal. However, there was no debut for Nigel Dawes, another prominent new arrival.

Neftekhimik, swept by Ak Bars in the first round of the playoffs, had a point to prove. Vyacheslav Butsyaev’s team focussed on strengthening its defense in the summer and Otso Rantakari, arrived from Switzerland, took a place in the starting line-up here.

The new-look Neftekhimik ‘D’ did a good job of protecting Konstantin Barulin’s net. After 40 minutes, the game had just one goal, a first-period effort from Bulat Shafigullin to give the visitor a slender advantage. Galiyev tied it up early in the third before a string of minor penalties disrupted the game. Timur Khafizov restored Neftekhimik’s lead, then Alexander Loginov made it 3-1 during a 4-on-3 power play. Da Costa set up Galiyev’s second late on, but the win went to Neftekhimik.

The game was played behind closed doors — Galiyev was disconcerted to hear echoes around the arena — and on the bench the coaches wore masks. Ak Bars head coach Dmitry Kvartalnov insisted that was nothing to worry about: “It doesn’t bother me,” he said. “The guys can hear me through the mask.” He was more concerned about his team’s propensity for needless penalties, something that limited his opportunities to use Da Costa and scuppered a potential fightback in the final frame. 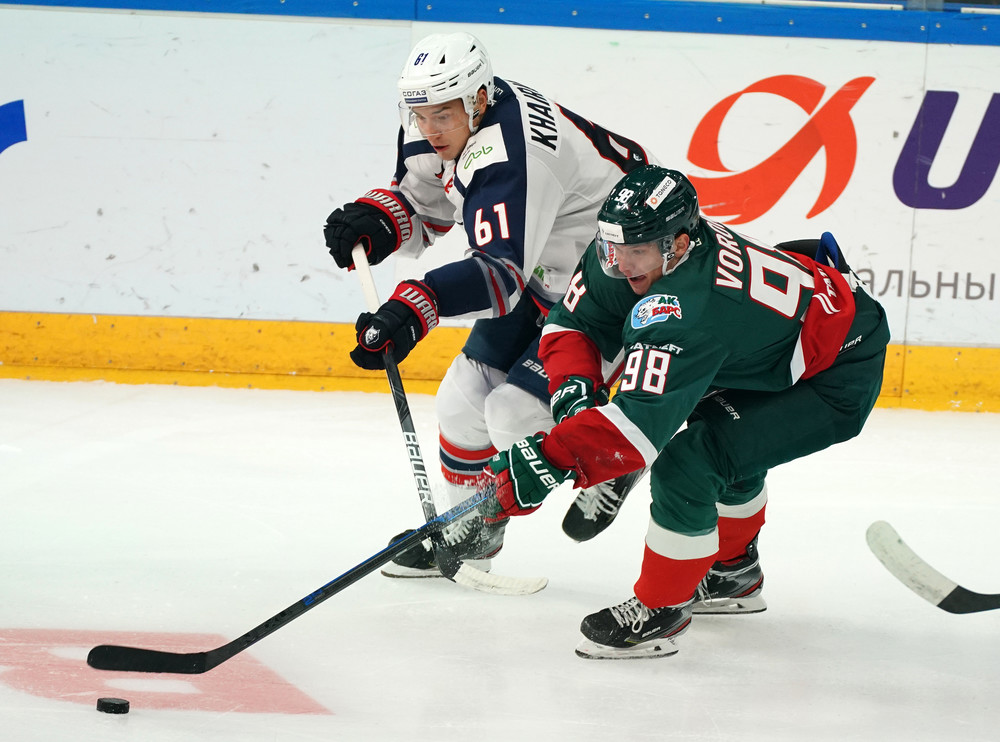